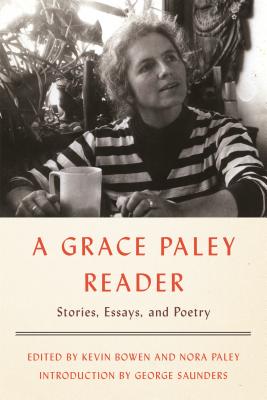 A Grace Paley Reader compiles a selection of Paley’s writing across genres, showcasing her breadth of work as well as her extraordinary insight and brilliant economy of words.

"A writer like Paley," writes George Saunders, “comes along and brightens language up again, takes it aside and gives it a pep talk, sends it back renewed, so it can do its job, which is to wake us up.” Best known for her inimitable short stories, Grace Paley was also an enormously talented essayist and poet, as well as a fierce activist. She was a tireless member of the antiwar movement, the civil rights movement, the tenants’ rights movement, the anti-nuclear-power movement, and the Women’s Pentagon Action, among other causes, and proved herself to be a passionate citizen of each of her communities—New York City and rural Vermont.


Praise For A Grace Paley Reader: Stories, Essays, and Poetry…

Praise for A Grace Paley Reader

"A welcome new collection of [Paley's] short stories, nonfiction, and poems . . . You can take the Reader to a rally and feel galvanized by Paley's conviction, or you can take it to bed late at night and find pleasure and comfort in humane prose." —Alexandra Schwartz, New Yorker

"This new collection reminds us that Paley, despite her view of herself as writer/housewife, was not so much a writer who drifted onto political subjects from time to time; she was a full-time activist and moral leader who happened to be gifted at writing . . . Among the many pleasures of Paley’s work is the reassurance it offers that, just as we survived the events of those years, by analogy, we may yet survive the things that menace us now . . . It’s hard to think of another writer who has been admired for her virtuous, cheerful, and positive character as much as for her work." —Diane Johnson, The New York Review of Books

"If the Reader was intended as a memorial, published a decade after her death, it now seems more pressing—a necessary antidote to the current demoralization of the American left and the disorientation of what remains of the country’s center. . . Of the voices of mid-century American radicalism, few could ever make perseverance seem so vital.” —Nicholas Dames, The Atlantic

"Grace Paley may be the most underrated of New York twentieth-century writers . . . Paley became a knower of women, a conscious feminist, and a writer all at once . . . There are many generous writers, and many who cared more for living and writing and their families than they cared for fame. But of all these Grace Paley is one of the very best, which A Grace Paley Reader knows." —Joseph Livingstone, New Republic

"[A Grace Paley Reader] reminds us that Paley the short-story writer was also Paley the activist, the pamphleteer, the poet, the community organizer, and the committed leftist . . . A Grace Paley Reader helps to return the writer to her historical moment, to the specific conditions that shaped her life as an artist and activist . . . Her fiction was more than just empathetic: It not only sought to understand the world from the point of view of others, but also insisted on how integral this sense of connection was to the work of radical politics." —Maggie Doherty, The Nation

"[A Grace Paley Reader is] the kind of retrospective that, in an era in which plot has given way to character, reveals the vital scope of [Paley's] influence.” —Megan O'Grady, Vogue (Must-Read Books of Spring 2017)

"The new A Grace Paley Reader, edited by Kevin Bowen and Nora Paley and introduced by George Saunders, makes accessible the writings of a woman who lived a life of tenacious and peaceful resistance. Divided into three sections, Paley’s stories, essays, and poems convey distilled wisdom gained from a lifetime of fighting for what she believed . . . her voice is an especially important one now. The issues of her time are the issues of our time . . . A Grace Paley Reader contains a sampling of the wisdom that one woman gleaned from not taking the easy way out." —Jerusha Joy Emerson, Los Angeles Review of Books

“The nice thing about A Grace Paley Reader, aside from the reminder that now would be a good time to read Grace Paley (and it so happens that now is areally good time to reread, or read for the first time, her work, which is full of energetic struggle against tyrannies small and large), is that by bringing together a selection of her stories, nonfiction pieces, and poems, it illuminates the connections among them, along with the intertwinings of work and life . . . And the longer I’ve had it with me, the more I find myself identifying with a title that had at first seemed awfully studious. A Grace Paley reader: I’m glad to be one.” —Karen Olsson, Bookforum

"Lucky us that a generous selection of [Paley's] stories, essays and poems has been collected in the just-published A Grace Paley Reader. . . “How can we dislike ourselves when she loves us so?” Saunders asks. Paley never flinched from showing us what’s ugly in who we are. But she never once doubted all we might yet be." —Mike Fischer, Milwaukee Journal-Sentinel

"Kevin Bowen and Nora Paley, the writer’s daughter, have compiled a marvelous introduction to her work, A Grace Paley Reader . . . it proves a fitting tribute to a great writer . . . As with all good writing, these stories are timeless . . . After encountering one of Paley’s stories, it is hard to leave it behind. It—and the characters who fill it—linger. In his introduction to this volume, author George Saunders calls Paley ‘a kind of secular saint’—a saint of seeing. It is, indeed, her singular way of seeing that makes Paley’s work still relevant, still essential and still so eminently readable.” —Robert Weibezahl, BookPage

"Paley was the real deal . . . [this] new collection . . . brings together work from the course of her career and provides a much-needed reminder of its importance . . . Her work remains indelible." —Paul Wilner, The Millions

"Grace Paley is the most intelligent, generous, incorruptible writer I ever knew. Her daughter says, “I learned from her that precision requires a warm eye, not a cold one,” and so did we all. Keen wit and real modesty seldom occur in such happy alliance. Who she was is what she writes. She never shows off, never bullies. She asks us what do you think about this? and is interested in our answer. She takes nothing for granted and everything as worth rethinking. Her writing on social issues remains timely because it was never superficial; she held understanding more useful than judgment. Very few writers can match the offhand voice, with its unmistakable oral cadence, in which her poignant, funny short stories are told. Her poem “Responsibility” set the standard she herself met, and her poetry, always at the service of moral issues, is still giving readers lines to live by. This excellent anthology of her work is a gift of her generous spirit to the rest of this century. I hope it finds the love, warmth, and honor it offers us all." — Ursula K. Le Guin

“Grace Paley’s work has a way of surprising us in times of reckoning. There’s no other voice of calm, deliberate certainty as hers. She possesses the capacity of observation alive with a resolve raised out of the Bronx. This ‘once in a lifetime’ realist has endured, but, most of all, we need Grace now. A Grace Paley Reader is the best we can do in these times. Whether writing from behind the bars of a Greenwich Village jail where she spent six days for protesting; or deciphering the complexity of love, race and class, motherhood, fidelity, and capitalism; or reporting from North Vietnam, Paley reminds us of a larger responsibility through a personal vernacular that resonates out to the world.” —Yusef Komunyakaa

“Has there ever been an author like Paley? A poet and essayist but primarily a short story writer, she functioned, before her death in 2007 at age 84, as a kind of conscience to the culture, an activist who saw art-making as political from the start . . . her short stories are among the finest produced by an American . . . 'What does a writer leave behind?’ George Saunders asks in his introduction. 'Scale models of a way of seeing and thinking.'" —Kirkus Review (starred)

“Grace Paley makes me weep and laugh—and admire. She is that rare kind of writer, a natural, with a voice like no one else’s: funny, sad, lean, modest, energetic, acute.” —Susan Sontag

“Paley’s work has an honesty and guilelessness about it, qualities made all the more luminous by an artfully intricate prose style full of surprises . . . Paley is one of the few who write about people who actually believe in things passionately . . . and say so. She demonstrates how history and politics can move and change—and victimize—people, and makes us care about her characters even if we disagree with them.” —Robert R. Harris, The New York Times Book Review

“These stories, brief and extended, burn with a high-energy commitment to the great work of being alive. They are stories full of the stories we all tell and live by, tall stories as well as short . . . And they are stories in which the whole of a world, its children, its dead, its furniture, its snacks, is lovingly and unsentimentally named. Named, and not forgiven.” —Salman Rushdie, The Guardian

“[Grace Paley] is resolute, stalwart, vigorous. She is urban to an unusual degree, cataloging both the horrors and the surprising pockets of green in her native New York City. And she is unique . . . in her ability to fit large-scale political concerns both seamlessly and effectively onto very small canvases.” —Anne Tyler, The New Republic

Grace Paley, born in the Bronx in 1922, was a renowned writer and activist. Her Collected Stories was a finalist for both the Pulitzer Prize and the National Book Award. Her other collections include Enormous Changes at the Last Minute and Just As I Thought. She died in Vermont on August 22, 2007.
Loading...
or
Not Currently Available for Direct Purchase