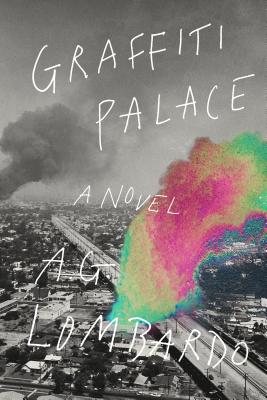 A brilliant, exhilarating debut novel that retells The Odyssey during the 1965 Watts Riots—like nothing you’ve ever read before

It’s August 1965 and Los Angeles is scorching. Americo Monk, a street-haunting aficionado of graffiti, is frantically trying to return home to the makeshift harbor community (assembled from old shipping containers) where he lives with his girlfriend, Karmann. But this is during the Watts Riots, and although his status as a chronicler of all things underground garners him free passage through the territories fiercely controlled by gangs, his trek is nevertheless diverted.

Embarking on an exhilarating, dangerous, and at times paranormal journey, Monk crosses paths with a dizzying array of representatives from Los Angeles subcultures, including Chinese gangsters, graffiti bombers, witches, the Nation of Islam leader Elijah Muhammad, and others. Graffiti Palace is the story of a city transmogrified by the upsurge of its citizens, and Monk is our tour guide, cataloging and preserving the communities that, though surreptitious and unseen, nevertheless formed the backbone of 1960s Los Angeles.

With an astounding generosity of imagery and imagination, Graffiti Palace heralds the birth of a major voice in fiction. A. G. Lombardo sees the writings on our walls, and with Graffiti Palace he has provided an allegorical paean to a city in revolt.


Praise For Graffiti Palace: A Novel…

"A performative resistance to authority, channeling the multiple contrasting voices and stories of Los Angeles into a mural exploding with color and contradictions." —Los Angeles Review of Books

"[A] bravura improvisation on The Odyssey . . . Lombardo tosses off Odyssey markers and channels Thomas Pynchon and Colson Whitehead . . . Lombardo has created an exuberantly cartoonish, incisive, and suspenseful tale of an erupting city and an earnest “street scholar” intent on making us “see the writing on the walls.” —Donna Seaman, Booklist

“This debut novel is another unexpected wild ride, one with an ambitious and imaginative premise… [and a] rhythmic urgency and inventiveness propelling the reader forward through protagonist Americo Monk’s dark night.” —Los Angeles Daily News

"[Lombardo's] use of supernatural imagery that clouds the mind invokes a nightmare landscape for the people in it, something so horrible it begs not to be real." —The Coil (on Medium)

"In his debut novel, Lombardo, who flashes impressive stylistic chops throughout, seems to be aiming for his own jazz-inflected version of a Joycean “night town” ramble infused with history, urban legend, dark comedy, and mythological tropes." —Kirkus

“Reading Graffiti Palace, I half wondered if the Watts Riots had been staged all those years ago just so A.G. Lombardo could write a novel about it. This is a book that’s as crazy and unpredictable as an urban uprising; it’s a phantasmagoric journey, written in precise and haunting prose, through a wounded and defiant city called Los Angeles.” —Héctor Tobar, author of The Barbarian Nurseries and Deep Down Dark

“What an audacious debut: a novel that reframes The Odyssey as a journey across Los Angeles during the Watts Riots. Beautiful, hard-edged, challenging, and unexpected, Graffiti Palace recalls the linguistic exuberance of Thomas Pynchon while evoking the surreal landscape of a city under siege. At the same time, it never loses sight of the essential human drama—the desire, despite (or because of) everything that’s happening, to find a passage home.” —David Ulin, author of Sidewalking: Coming to Terms with Los Angeles and editor of Writing Los Angeles: A Literary Anthology

“An electrifying new voice in American fiction. A. G. Lombardo’s wildly entertaining debut reimagines the 1965 Watts Riots as an Homeric journey through rioting cops, burning streets, CIA conspiracies, and the potentially fatal semiotics of race and oppression in America. Along the way, we also run into Godzilla, Elijah Muhammad, the greatest taggers in the history of Los Angeles freeway art, and a deadly fortune cookie war. Graffiti Palace is a stunning arrival, easily the most exciting book of the year.” —Evan Wright, author of Generation Kill

A. G. Lombardo is a native Angeleno who teaches at a Los Angeles public high school. Graffiti Palace is his debut novel.
Loading...
or
Not Currently Available for Direct Purchase