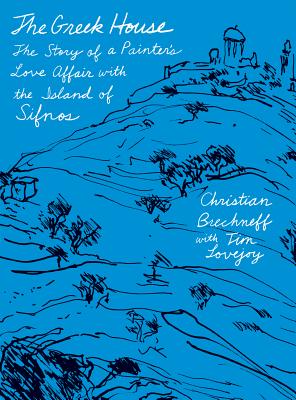 When Christian Brechneff first set foot on the Greek island of Sifnos, it was the spring of 1972 and he was a twenty-one-year-old painter searching for artistic inspiration and a quiet place to work. There, this Swiss child of Russian émigrés, adrift and confused about his sexuality, found something extraordinary. In Sifnos, he found a muse, a subject he was to paint for years, and a sanctuary.
In The Greek House, Brechneff tells a funny, touching narrative about his relationship to Sifnos, writing with warmth about its unforgettable residents and the house he bought in a hilltop farm village. This is the story of how he fell in love with Greece, and how it became a haven from the complexities of his life in Western Europe and New York. It is the story of his village and of the island during the thirty-odd years he owned the house—from a time when there were barely any roads, to the arrival of the modern world with its tourists and high-speed boats and the euro. And it is the story of the end of the love affair—how the island changed and he changed, how he discovered he had outgrown Sifnos, or couldn't grow there anymore.
The Greek House is a celebration of place and an honest narrative of self-discovery. In its pages, a naïve and inexperienced young man comes into his own. Weaving himself into the life of the island, painting it year after year, he finds a place he can call home.


Praise For The Greek House: The Story of a Painter's Love Affair with the Island of Sifnos…

“After reading The Greek House by the painter Christian Brechneff . . . I wanted to drop everything and go to Sifnos, the rocky island in the Aegean Sea lovingly portrayed in his memoir.” —Steven Kurutz, The New York Times

“In this enjoyable memoir/travelogue, Christian Brechneff, a young artist, spends several idyllic years on the Greek island of Sifnos . . . Brechneff provides a stirring portrait of his magical experiences in this sexually charged island atmosphere . . . The stories are all illuminating, offering insights on human nature and finding a sense of belonging. The book might even send readers to Sifnos in search of their own Greek fantasy.” —Gary M. Kramer, Instinct

“This enchanting memoir by Swiss-born painter Brechneff illuminates the simple beauty of a remote Greek island where the painter found solace over a 35 year career . . . Brechneff's narrative is an unadorned yet sensuous tribute to the adopted land and people that inspired his work.” —Publishers Weekly

“Brechneff paints a portrait as vivid and captivating as anything he ever committed to canvas.” —Carol Haggas, Booklist

Born in the former Belgian Congo in 1950, Christian Brechneff was educated in Switzerland, England, and the United States. In 1975, he received his master of art degree from the Royal College of Art in London. He shows regularly in Basel and Zurich, and Three Oceans, his one-man show in New York in 2001, was with Salander-O’Reilly Galleries. He is also the author of Homage: Encounters with the East, a book of travel drawings published in 2007.