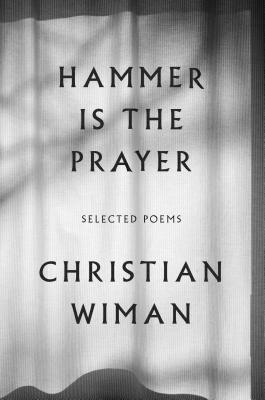 Hammer Is the Prayer

A visionary selection from one of America’s foremost poets

One of the most distinctive voices in contemporary American poetry, Christian Wiman has forged a singular style that fuses a vivid and propulsive music with clear-eyed realism, wry humor, and visionary lament. In his “daring and urgent” (The New York Times Book Review) memoir, My Bright Abyss, he asks, “What is poetry’s role when the world is burning?” Hammer Is the Prayer: Selected Poems might be read as an answer to that question.

From the taut forms of his first book to the darker, more jagged fluencies of his second, into the bold and pathbreaking poems of his last two collections, Hammer Is the Prayer bears the reckless, restless interrogations and the slashing lyric intensity that distinguish Wiman’s verse. But it also reveals the dramatic and narrative abilities for which he has been widely praised—the junkyard man in “Five Houses Down” with his “wonder-cluttered porch” and “the eyesore opulence / of his five partial cars,” or the tragicomic character in “Being Serious” who suffers “the world’s idiocy / like a saint its pains.”

Hammer Is the Prayer brings together three decades of Wiman’s acclaimed poetry. Selected by the author, these poems reveal the singular music and metaphysical urgency that have attracted so many readers to his work and firmly assert his place as one of the most essential poets of our time.

Christian Wiman is the author of several books, including the memoirs My Bright Abyss: Meditation of a Modern Believer (FSG, 2013) and He Held Radical Light: The Art of Faith, the Faith of Art (FSG, 2018); Every Riven Thing (FSG, 2010), winner of the Ambassador Book Award in poetry; Once in the West (FSG, 2014), a National Book Critics Circle Award finalist in poetry; and Stolen Air: Selected Poems of Osip Mandelstam. He teaches religion and literature at the Yale Institute of Sacred Music and Yale Divinity School.
Loading...
or support indie stores by buying on
(This book is on backorder)