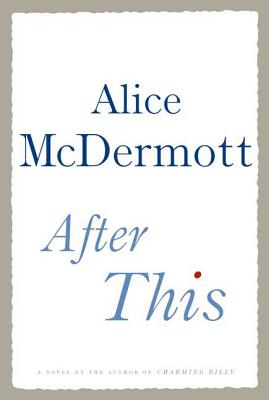 Alice McDermott's powerful novel is a vivid portrait of an American family in the middle decades of the twentieth century. Witty, compassionate, and wry, it captures the social, political, and spiritual upheavals of those decades through the experiences of a middle-class couple, their four children, and the changing worlds in which they live.

While Michael and Annie Keane taste the alternately intoxicating and bitter first fruits of the sexual revolution, their older, more tentative brother, Jacob, lags behind, until he finds himself on the way to Vietnam. Meanwhile, Clare, the youngest child of their aging parents, seeks to maintain an almost saintly innocence. After This, alive with the passions and tragedies of a determining era in our history, portrays the clash of traditional, faith-bound life and modern freedom, while also capturing, with McDermott's inimitable understanding and grace, the joy, sorrow, anger, and love that underpin, and undermine, what it is to be a family.


Praise For After This: A Novel…

“Has something classic about it . . . [Its] craftsmanship and its moral intelligence are as one . . .Immaculate.” —The New York Times Book Review with praise for Child of My Heart

“Richly textured, intricately woven . . . A work not only of, but about, the imagination.” —Margaret Atwood, The New York Review of Books with praise for Child of My Heart

“For all her intricate narrative design, it is the depth of feeling in Alice McDermott's fiction--the losses tallied and the steps not taken, as finely calibrated as summer rain--that has brought her such high regard. With her prismatic truths and narrative switchbacks, she captures a world so internal that her characters themselves would hardly be able to express it; it is instead the perfect gesture--the barely noticed frown, the hand silently extended--that delivers the entirety of that hidden realm . . . Charming Billy is a remarkable and beautifully told novel, with overlays of prose and insight that are simply luminescent.” —Gail Caldwell, The Boston Sunday Globe with praise for Charming Billy

Alice McDermott is the author of several novels, including The Ninth Hour; Someone; After This; Child of My Heart; Charming Billy, winner of the 1998 National Book Award; and At Weddings and Wakes—all published by FSG. That Night, At Weddings and Wakes, and After This were all finalists for the Pulitzer Prize. Her stories and essays have appeared in The New York Times, The Washington Post, The New Yorker, Harper’s Magazine, and elsewhere. For more than two decades she was the Richard A. Macksey Professor of the Humanities at Johns Hopkins University and a member of the faculty at the Sewanee Writers Conference. McDermott lives with her family outside Washington, D.C.
Loading...
or
Not Currently Available for Direct Purchase