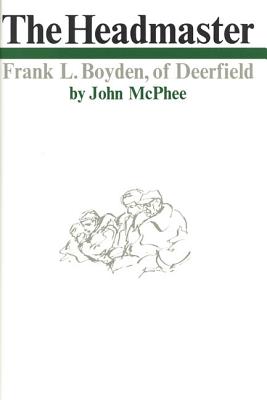 Starting in 1902 at a country school that had an enrollment of fourteen, Frank Boyden built an academy that has long since taken its place on a level with Andover and Exeter. Boyden, who died in 1972, was the school's headmaster for sixty-six years. John McPhee portrays a remarkable man "at the near end of a skein of magnanimous despots who...created enduring schools through their own individual energies, maintained them under their own absolute rule, and left them forever imprinted with their own personalities." More than simply a portrait of the Headmaster of Deerfield Academy, it is a revealing look at the nature of private school education in America.

Praise For The Headmaster: Frank L. Boyden of Deerfield…

“One always has the sense with McPhee of a man at a pitch of pleasure in his work, a natural at it, finding out on behalf of the rest of us how some portion of the world works.” —Edward Hoagland, The New York Times
or
Not Currently Available for Direct Purchase
Copyright © 2020 American Booksellers Association