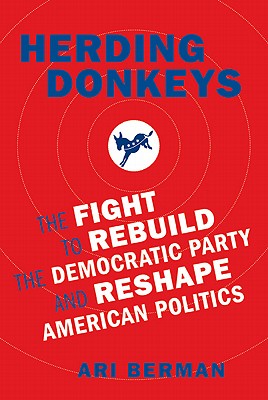 The Fight to Rebuild the Democratic Party and Reshape American Politics

After the 2004 election, the Republican Party held the White House, both houses of Congress, twenty-eight governorships, and a majority of state legislatures. One-party rule, it seemed, was here to stay.

Herding Donkeys tells the improbable tale of the grassroots resurgence that transformed the Democratic Party from a lonely minority to a sizable majority. It chronicles the inside story of Howard Dean’s visionary yet deeply controversial fifty-state strategy, charting his unpredictable journey from insurgent presidential candidate, to front-running flameout, to chairman and conscience of the Democratic Party in an unexpected third act. Ari Berman reveals how the Obama campaign built upon Dean’s strategy when others ridiculed it, expanding the ranks of the party and ultimately laying the groundwork for Obama’s historic electoral victory—but also sowing the seeds of dissent that would lead to legislative stalemate and intraparty strife.

Revelatory and entertaining, in the vein of Timothy Crouse’s The Boys on the Bus and Rick Perlstein’s Nixonland, Herding Donkeys combines fresh reportage with a rich and colorful cast of characters. It captures the untold stories of the people and places that reshaped the electoral map, painting a vivid portrait of a shifting country while dissecting the possibility and peril of a new era in American politics.

Praise For Herding Donkeys: The Fight to Rebuild the Democratic Party and Reshape American Politics…

“The resurgence of the Democratic Party in the past two election cycles is one of the most important—and least understood—political stories of the new century. Ari Berman tells that tale with reportorial verve, a keen eye, a sharp pen, and a wealth of fresh insight. If you want to understand the grassroots revival of progressivism in America, and also the new challenges and aching disappointments that have come along with it, this is the book to read.” —John Heilemann, national political columnist for New York magazine and coauthor of Game Change: Obama and the Clintons, McCain and Palin, and the Race of Lifetime


“Ari Berman has written a political narrative so revelatory and exhilarating it kept me up nights reading. Herding Donkeys is some of the freshest and incisive political reporting out there, and Berman, who has the keen eye of a novelist, is one heck of a storyteller.” —Alex Kotlowitz, author of There Are No Children Here: The Story of Two Boys Growing Up in the Other America

“Herding Donkeys is essential to understanding how the Democratic Party came back from the dead in 2006 and 2008. But it’s especially good at explaining what happened to all of Barack Obama’s grassroots energy. This is a hopeful but also sobering tale, told with strong inside reporting.” —Jonathan Alter, author of The Promise: President Obama, Year One

“Herding Donkeys is political reporting at its finest. In his spirited debut, Ari Berman takes readers inside the back rooms and living rooms where politics actually happens, but his novel vantage point doesn’t prevent him from rendering the tough but fair judgments every great political reporter needs to make. This is a ripping account of the Democratic Party through an intense period of historic transformation.” —Michael Tomasky, author of Hillary’s Turn: Inside Her Improbable, Victorious Senate Campaign

“An intriguing behind-the-scenes look at how the Obama campaign built on the grassroots movement that had catapulted Dean to prominence . . . Engaging and balanced—a stand-out book.” —Kirkus Reviews (starred review)

“With a keen appreciation of political strategy as well as an eye for telling anecdote and amusing detail, Ari Berman tells the amazing story of the Democratic party’s revival. Berman’s reporting vindicates the fifty-state strategy of Howard Dean and the determined organizing of Barack Obama—and shows why grassroots activism is still the most potent force for change in America.” —Joe Conason, author of Big Lies: The Right-Wing Propaganda Machine and How It Distorts the Truth

“Ari Berman tells the rollicking and rousing story of the fight for the soul of the Democratic party that has reshaped American politics. Full of riveting revelations, vivid reporting, and a cast of colorful characters, Herding Donkeys captures the exhilaration of the grassroots insurgency that Howard Dean launched—and Obama seized—to realign our political map. At a time of disillusionment with establishment politics, this book is solace for the soul. It is a timely reminder that the grit of tenacious organizers and antiestablishment politicians in red, blue, and purple states alike offers Hope 2.0.” —Katrina vanden Heuvel, Editor and Publisher, The Nation

" While a scoop-rich tome like John Heilemann and Mark Halperin's Game Change can tell us a lot about how campaigns are won and lost from the top down, Berman's more thoughtful book is equally good fun in telling the story of the election from the bottom up." —Dana Goldstein, The American Prospect

ARI BERMAN is a political correspondent for "The Nation "and an Investigative Journalism Fellow at the Nation Institute. His writing has appeared in "The New York Time"s, and he is a frequent commentator on MSNBC and National Public Radio. He lives in New York City.
Loading...
or
Not Currently Available for Direct Purchase