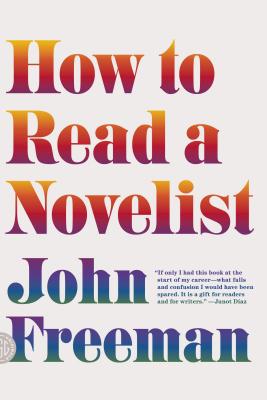 How to Read a Novelist

The novel is alive and well, thank you very much

For the last fifteen years, whenever a novel was published, John Freeman was there to greet it. As a critic for more than two hundred newspapers worldwide, the onetime president of the National Book Critics Circle, and the former editor of Granta, he has reviewed thousands of books and interviewed scores of writers. In How to Read a Novelist, which pulls together his very best profiles (many of them new or completely rewritten for this volume) of the very best novelists of our time, he shares with us what he's learned.
From such international stars as Doris Lessing, Haruki Murakami, Salman Rushdie, and Mo Yan, to established American lions such as Don DeLillo, Norman Mailer, Toni Morrison, Marilynne Robinson, Philip Roth, John Updike, and David Foster Wallace, to the new guard of Edwidge Danticat, Dave Eggers, Jonathan Franzen, and more, Freeman has talked to everyone.
What emerges is an instructive and illuminating, definitive yet still idiosyncratic guide to a diverse and lively literary culture: a vision of the novel as a varied yet vital contemporary form, a portrait of the novelist as a unique and profound figure in our fragmenting global culture, and a book that will be essential reading for every aspiring writer and engaged reader—a perfect companion (or gift!) for anyone who's ever curled up with a novel and wanted to know a bit more about the person who made it possible.


Praise For How to Read a Novelist…

"Ranging from the profound to the amusing,Freeman eloquently appreciates novelists and the “consolations of narrative.”—Booklist

"To read about the personal, emotional, mental, political, and artistic struggles and triumphs of great writers is to see them as flesh and blood human beings...intimate and thoughtful sketches."—Publishers Weekly

John Freeman is an award-winning writer and book critic. The former editor of Granta and onetime president of the National Book Critics Circle, he has written about books for more than two hundred publications worldwide, including The New York Times Book Review, the Los Angeles Times, the San Francisco Chronicle, The Wall Street Journal, The Guardian, La Repubblica, and La Vanguardia. His first book, The Tyranny of E-mail, was published in 2009. His poetry has been published in The New Yorker, ZYZZYVA, and The Paris Review. He lives in New York City.
Loading...
or
Not Currently Available for Direct Purchase