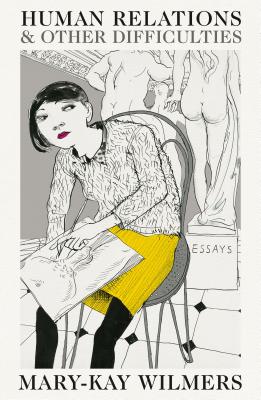 Human Relations and Other Difficulties (Hardcover)

An incisive collection of essays by the editor of the London Review of Books, whom Hilary Mantel has called “a presiding genius”

Mary-Kay Wilmers cofounded the London Review of Books in 1979, and has been its sole editor since 1992. Her editorial life began long before that: she started at Faber and Faber in the time of T. S. Eliot, then worked at the Listener, and then at the Times Literary Supplement. As John Lanchester says in his introduction, she has been extracting literary works from reluctant writers for more than fifty years.

As well as an editor, Mary-Kay Wilmers is, and has been throughout her career, a writer. The deeply considered pieces in Human Relations and Other Difficulties, whether on Jean Rhys, Alice James, a nineteenth-century edition of the Pears’ Cyclopaedia, novel reviewing, Joan Didion, mistresses, seduction, or her own experience of parenthood, are sparkling, funny, and absorbing.

Underlying all these essays is a concern with the relation between the genders: the effect men have on women, and the ways in which men limit and frame women’s lives. Wilmers holds these patterns up to cool scrutiny, and gives a crisp and sometimes cutting insight into the hard work of being a woman.

Mary-Kay Wilmers co-founded the London Review of Books in 1979, and has been its sole editor since 1992. After a childhood spent in America, Belgium and England, Wilmers went to Oxford to read French and Russian. Initially planning on a career as a simultaneous translator, she instead found work as a secretary at Faber & Faber in the time of T.S. Eliot, working at the Listener, the Times Literary Supplement, and contributing to the New Statesmen before co-founding the LRB. She is the author of The Eitingons, a book about her family and their cold war deeds and misdeeds, which the Daily Telegraph called “transfixingly readable.”

Praise For Human Relations and Other Difficulties: Essays…

“Wilmers offers fascinating character studies of the authors and their subjects, both of whom tend to be “difficult” women, including Germaine Greer, Patty Hearst, Marianne Moore, and Jean Rhys. Wilmers has a voice as crisp, clear, and dry as gin, simultaneously amused and wise.”
—Publishers Weekly

“Wilmers’s latest book, Human Relations and Other Difficulties, exhibits the habit of mind that has made her paper among the most read of its kind in Europe. It’s a companionable first-person report that tours the writer’s understanding of a subject, alive to the human comedy.”
—Wyatt Mason, The New York Times Magazine

“[These essays] demonstrate Wilmers’ occasionally supercilious yet irresistible seduction with the work at hand, plunging readers into long, involved pieces about writers’ lives, motivations, and peccadilloes ... Wilmers is a ferocious reviewer, as shown in her more general essays on the art of writing obituaries ... Insightful essays for literary-minded readers. ”
—Kirkus Reviews

“Taken collectively, these essays summon up the lives of women, mostly writers, who kicked against the barriers, using whatever means they could — their sharp, stabbing minds, the power of beauty, the surrender and protest of illness, their prickly edges — to shape often unruly lives.” —The Financial Times

“Legendary…each [essay] is a springboard for forensic discussion of the subject in question… Wilmers is highly literate, informed, aphoristic…one is left in no doubt about [her] fearsome intelligence.” —The Herald

“A collection of essays by Mary-Kay Wilmers, whose intelligence I find endlessly opaque and interesting.”— Anne Enright, The Guardian, Best Summer Books of 2018

"She [has] done more for the British essay than anyone in the last 150 years." —Andrew O'Hagan