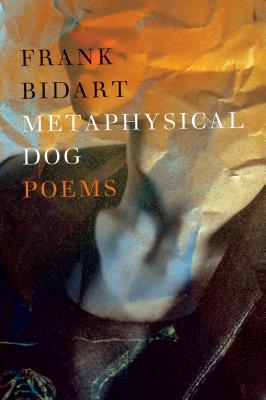 A vital, searching new collection from one of finest American poets at work today

In "Those Nights," Frank Bidart writes: "We who could get / somewhere through / words through / sex could not." Words and sex, art and flesh: In Metaphysical Dog, Bidart explores their nexus. The result stands among this deeply adventurous poet's most powerful and achieved work, an emotionally naked, fearlessly candid journey through many of the central axes, the central conflicts, of his life, and ours.
Near the end of the book, Bidart writes:

In adolescence, you thought your work
ancient work: to decipher at last

love. To make what was once whole
whole again: or to see

why it never should have been thought whole.

This "ancient work" reflects what the poet sees as fundamental in human feeling, what psychologists and mystics have called the "hunger for the Absolute"—a hunger as fundamental as any physical hunger. This hunger must confront the elusiveness of the Absolute, our self-deluding, failed glimpses of it. The third section of the book is titled "History is a series of failed revelations."
The result is one of the most fascinating and ambitious books of poetry in many years.

Frank Bidart is the author of Metaphysical Dog (FSG, 2013), Watching the Spring Festival (FSG, 2008), Star Dust (FSG, 2005), Desire (FSG, 1997), and In the Western Night: Collected Poems 1965-90 (FSG, 1990). He has won many prizes, including the Wallace Stevens Award, the 2007 Bollingen Prize in American Poetry, and the National Book Critics Circle Award. He teaches at Wellesley College and lives in Cambridge, Massachusetts.

“The best book of poems published this year? Easy--it was Frank Bidart's Metaphysical Dog, Bidart's strongest book ever, and also his most accessible: for readers who are new to Bidart's work, this is the best place to start.” —Dan Chiasson, The New Yorker

“Bidart's new book returns to the rough, terse and sometimes shocking phrasings that won him attention decades ago. He uses them, now, to look back, to ask how memory works, what poetry does, and what either of them can do for souls, and bodies, past the midpoint of a life . . . The forceful starkness in Bidart's usual style--almost no description, few overt euphonies, plenty of repetition--fits characters who try to test, or reject, or escape, the limits of the merely physical, describable world . . . To immerse oneself in Bidart's work is to enter a crowd of scary, unusual characters: artistic geniuses, violent misfits, stunted failures and dramatic self-accusers (including, in some guise, the poet himself). Yet it is also to discover credible claims about the lives that many of us choose . . . These poems do not lay out a path to happiness, but they do provide a theory of art . . . Bidart writes through passion, but also through subtraction, leaving out all but the statements that seem essential to the soul, the desire, the wisdom or the memory at hand. The results, however austere, can be revelations: his poems are doors best opened with cautious attention--behind them you might even see yourself.” —Stephen Burt, The New York Times Book Review

“No major poet of our time has been so unguarded as Bidart, so willing to travel to the dark places in the psyche, so recklessly earnest about his need to get to the bottom of things . . . Bidart's brave, virulent investment in resistance results in work of extraordinary power . . . [his] work is at once challenging and intimate. It courts excess and disorder with an unmistakable sense that it is possible for the poet to go wrong and thereby betray his vocation. There is in Bidart's work the surprise we crave in art that matters, but we would never think to say about it what Clement Greenberg said of experimental art: that it is ‘all surprise without satisfaction.'” —Robert Boyers, The Nation

“What is thrilling about reading Bidart's work, even more so as he pushes into his fifth decade of writing poems, is his repeated willingness to engage the agon of the self, the self in history both personal and public . . . Bidart is our most classical poet, because he knows that the only heroism possible consists in seeing and naming our fate.” —April Bernard, New York Review of Books

“At seventy-three years old, Bidart has a light, mellifluous voice that could lend succor to the shell shocked. Exceedingly generous and gentle, he also wields a supercharged intelligence, a tentacled erudition that reaches deep into what Matthew Arnold dubbed ‘the best that is known and thought in the world . . . Metaphysical Dog . . . [is] his most intimate testimonial of the poetic mind in reciprocity with the personal man.” —William Giraldi, Poets & Writers

“Bidart has spent the better part of a lifetime finding the means to make generalities ring out--to embody the ways in which our lives get locked up in ideas, and ideas locked up in our lives. In poem after poem, he uses everything from prosody to the caps lock key to infuse otherwise static abstractions with extraordinary force, often by halting the forward motion of a phrase . . . Part of his genius over the years (this is his eighth collection, reaching back to 1973's Golden State, and he now claims a rightful place in the ranks of American masters) has been his ability to present the drama of that which cannot change. Having left behind the long poems that first made him famous, Bidart increasingly writes in knots--knots he doesn't seek to untie but instead pulls tighter and tighter as he goes . . . Bidart's tragic view of life is apparently untouched by our 21st-century sense that everything can be improved, and his assumption of suffering as the condition of life lends his poems an untimely authority--one that feels almost moral in its determined gaze . . . Bidart writes about his doubt with powerful conviction, and his poetry never discourages, for all its despair. Instead, these poems testify that art can alter life, not by changing its course but by rewarding an otherwise ineffectual desire to make life live up to the promise it's forever making then snatching away, like Lucy setting up Charlie Brown . . . Bidart frequently returns to stories he recounted in earlier books--the loss of religion, extreme family dysfunction, coming out--but in Metaphysical Dog they're more explicitly tied to his life as a writer, which adds a surprising layer of vulnerability, pulling those experiences out into a plainer light. Even as Bidart suggests the ways in which he needed to transform these events, he also lets them stand, for a moment, as the stories of one life.” —Jonathan Farmer, Slate

“In this new book, terror and shame connected with the young body's flaws and differences--sexual and otherwise--ebb in the face of old age, a muted phase in which the body one loves best inhabits memory. The final poem, ‘For an Unwritten Opera,' strikes a lyric, almost formal pose, invoking ‘magpie beauty'--a kind of separateness within unity that can shape itself into love . . . Another restless exploration from a writer whose work defies conventionality and refuses to stop asking questions.” —Ellen Kaufman, Library Journal (starred review)

“My favourite book of the spring--and likely of many springs to come--is Metaphysical Dog by Frank Bidart, our great poet of rage--rage at the self, rage at the world--and acceptance. This collection engages his entire body of work, echoing the lyric fluency of his incomparable 2008 collection Watching the Spring Festival, assessing his legendary long poem "Ellen West," from 1977's The Book of the Body, and even harking back to the visionary terrain of his debut, Golden State. Metaphysical Dog is a book of devastating beauty and genuine terror--an unrelenting inquiry into some of the darkest corners of existence. No writer means as much to me as Frank Bidart, and I'm conscious of the inadequacy of this attempt to describe his work. But how do you write about unspeakable eloquence? How can you explain art that has taught you how to live?” —Jared Bland, The Globe and Mail

“‘At seventy-two, the future is what I mourn,' Bidart announces in this starkly inspiring eighth collection. The poet's spiky free reverse remains direct, sometimes even frightening, and clearer than ever before about mortality--his own death, and the deaths of his friends and his parents; and yet, perhaps in the spirit of anticipatory mourning, familiar interests--in old and new movies, terse metaphysical argument, and sex, especially sex between men--are all present. ‘The true language of ecstasy / is the forbidden // language of the mystics,' he says in ‘Defrocked,' exploring the language of piety as well as of blasphemy as he returns to his Bakersfield, Calif., childhood and his family's Catholic belief. Bidart's taut lines investigate faith and doubt, art and yearning, erotic fulfillment and literary heritage, ‘fueled by the ruthless gaze that / unshackled the chains shackling / queer me in adolescence,' even as they investigate their own premises; in ‘Writing "Ellen West," ' they also ask how Bidart composed one of his own most famous poems. The new volume veers away from the interest in overt beauty, rendered in musical lines, that was evinced in Watching the Spring Festival (2009), leaning more in this volume on the wiry abstractions of Bidart's earlier work. At the same time, the poems of Metaphysical Dog are at once emotionally bracing and full of intellectual reward. Bidart is widely admired by other influential poets; he seems in line for even more attention than he has received.” —Publishers Weekly (starred review)

“Frank Bidart has made an epic return to poetry, this time giving readers his latest collection, Metaphysical Dog, a work that dissects personal complexities in search for acceptance from within . . . At 72-years-old, Bidart keeps readers enticed as we savor this deeply reflective collection. Each piece is full of dynamic energy that keeps readers captivated. Such is the case with the poem ‘History,' a winding piece of symphonic beauty . . . The work can be described as dark and erotic as Bidart switches from themes of death to sex. A striking commonality between them, as Bidart seems to suggest, exists with our curiosity. While sex and death are two immense themes within the contemporary work, Bidart places particular emphasis on his personal upbringing, faith, and homosexuality . . . Each poem seems to serve as a reflection posed in question. As each of the multifaceted pieces breaks down its walls, readers advance into a place of vulnerability and speculation. Over the course of the collection, Bidart comes to find those answers, as theory becomes growth, inner-strength, and assurance. Metaphysical Dog is a burning and poignant read chock-full of lengthy prose to short, forceful pieces. As the collection has proved, time and time again, Bidart has continued to maintain his status as a prolific, unstoppable wordsmith.” —Kacy Muir, Times Leader

“[A] brilliant new collection . . . No other poet sounds like Bidart . . . you can hear the muscular physicality of his language, the way the sentence twists around the line breaks, never quite as expected. Bidart's line are often very beautiful, but they seldom move with conventional grace . . . Bidart's work is one of the unfolding wonders of the literature of our time. Read this book.” —Garth Greenwell, Towleroad