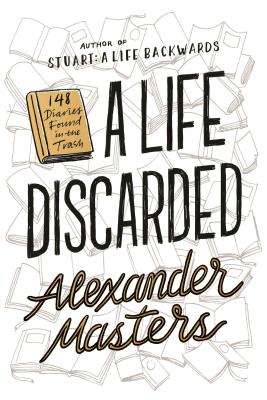 Alexander Masters, the bestselling author of Stuart: A Life Backwards, asks you to join him in celebrating an unknown and important life left on the scrap heap

In 2001, 148 tattered and mold-covered notebooks were discovered lying among broken bricks in a bin on a building site in Cambridge, England. Tens of thousands of pages were filled to the edges with urgent handwriting. They were a small part of an intimate, mysterious diary, starting in 1952 and ending half a century later, a few weeks before the books were thrown out. The anonymous author, known only as “I,” is revealed as the tragicomic patron saint of everyone who feels their life should have been more successful. Over five years, the brilliant biographer Alexander Masters uncovers the identity and real history of this secret author, ending with an astounding final revelation.

A biographical detective story that unfolds with the suspense of a mystery—but has all the dazzling originality that made Masters’s Stuart: A Life Backwards such a beloved book—A Life Discarded is a true, poignant, often hilarious story of an ordinary life.


Praise For A Life Discarded: 148 Diaries Found in the Trash…

"An affecting, bittersweet portrait of an anonymous person rescued—if rescued it is—from obscurity quite by accident … A lovely, elegant book of interest to historians and biographers as much as to general readers." - Kirkus Reviews

Alexander Masters is the author of Stuart: A Life Backwards, which won the Guardian First Book Award and the Hawthornden Prize; was short-listed for the Samuel Johnson Prize, the Costa Biography Award, and the National Book Critics Circle Award; and was made into an award-winning film produced for the BBC and HBO. He lives in Sussex.
Loading...
or
Not Currently Available for Direct Purchase