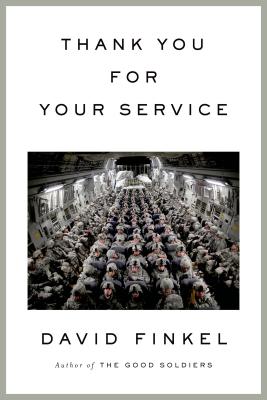 Thank You for Your Service


Praise For Thank You for Your Service…

“Embedded with the veterans, their families, their friends, and their counselors, Finkel lights up the lives of these struggling souls, who often compound their real problems by convincing themselves they're ‘weak' for ‘abandoning' their buddies and seeking treatment… Vivid, compelling, heartrending.” —Jeff Stein, Bookforum

“Together with its masterful prequel The Good Soldiers, [Thank You for Your Service] measures the wages of the war in Iraq--the wages of war, period--as well as anything I've read . . . [Finkel] atones for our scant attention by paying meticulous heed.” —Frank Bruni, The New York Times

“In this incredibly moving sequel, Finkel reconnects with some of the men of the 2-16--now home on American soil--and brings their struggles powerfully to life . . . Told in crisp, unsentimental prose and supplemented with excerpts from soldiers' diaries, medical reports, e-mails, and text messages, their stories give new meaning to the costs of service--and to giving thanks.” —Publishers Weekly (starred review)

David Finkel is the author of The Good Soldiers, listed a best book of 2009 by the New York Times, Chicago Tribune, Slate.com, and The Boston Globe, and winner of the Helen Bernstein Book Award for Excellence in Journalism. He is a staff writer for The Washington Post, and is also the leader of the Post’s national reporting team. He won the Pulitzer Prize for explanatory reporting in 2006 for a series of stories about U.S.-funded democracy efforts in Yemen, and the MacArthur "Genius" Grant in 2012. Finkel lives in Silver Spring, Maryland, with his wife and two daughters.
Loading...
or
Not Currently Available for Direct Purchase