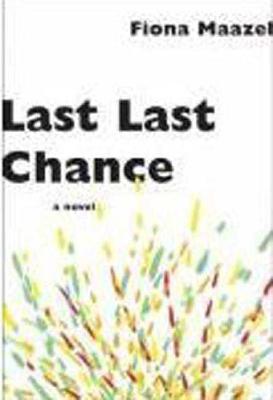 Last Last Chance, Fiona Maazel’s first novel, is one of the most distinctive debuts of recent years: a rollicking comic tale about (in no particular order) plague, narcotics recovery, and reincarnation.

A lethal strain of virus vanishes from a lab in Washington, D.C., unleashing an epidemic—and the world thinks Lucy Clark’s dead father is to blame. The plague may be the least of Lucy’s problems. There’s her mother, Isifrid, a peddler of high-end hatwear who’s also a crackhead and pagan theologist. There’s her twelve-year-old half sister, Hannah, obsessed with disease and Christian fundamentalism; and Lucy’s lover, Stanley, who’s hell-bent on finding a womb for his dead wife’s frozen eggs. Lastly, there’s her grandmother Agneth, who believes in reincarnation (and who turns out to be right). And then there is Lucy herself, whose wise, warped approach to life makes her an ideal guide to love among the ruins. Romping across the country, from Southern California to the Texas desert to rural Pennsylvania and New York City, Lucy tries to surmount her drug addiction and to keep her family intact—and tells us, uproariously, all about it.

Last Last Chance is a novel about survival and recovery, opportunity and despair, and, finally, love and faith in an age of anxiety. It introduces Maazel as a new writer of phenomenal gifts.

"Read this book now for the sentence-by-sentence brilliance of Maazel's inimitable voice, and enjoy it to the finish for its sophisticated and vulnerable portrayal of survival -- of the individual and the world-at-large, despite so much stacked against both. Maazel was born in 1975, but her imagination has been on fire for 1000 years." —Joshua Ferris, author of Then We Came to the End

"Somehow Fiona Maazel has made plague funny and the drug recovery narrative, ossified by predictable writers and their wounds, fresh and moving again. Last Last Chance is a stylish first wonder."—Sam Lipsyte

"Last Last Chance is not for the faint of heart or dim of humour. It's wicked, witty, a little whacked and surprisingly warm: what more did you want?"—Wesley Stace, author of Misfortune and By George

"You have to look to Denis Johnson's JESUS' SON for a narrative voice as darkly funny and drug-inflected as Maazel's. This sprawling, wonderfully digressive novel is up to the task at hand: love at the end of the world as we know it."--Amy Hempel

"Fiona Maazel’s novel LAST LAST CHANCE turns heartsickness, family dysfunction, substance abuse and a superplague into the sharpest — and most forgiving — comedy you will find between two covers. It is an absurdist generational saga that ranges widely for its wisdom, shows no mercy in its satire, and stakes out hopeful truths to dwell in during troubling times."--Benjamin Anastas, author of AN UNDERACHIEVER’S DIARY and THE FAITHFUL NARRATIVE OF A PASTOR’S DISAPPEARANCE

"Vigor in every line and a wit about bodies, drugs and plague that forms a positively original voice of our day."--Barry Hannah, author of Yonder Stands Your Orphan (2001)
or
Not Currently Available for Direct Purchase
Copyright © 2020 American Booksellers Association