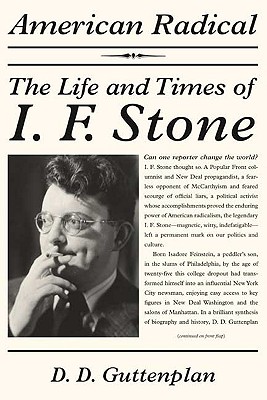 The Life and Times of I. F. Stone

Popular Front columnist and New Deal propagandist.  Fearless opponent of McCarthyism and feared scourge of official liars.  Enterprising, independent reporter and avid amateur classicist.  As D.D. Guttenplan puts it in his compelling book, I.F. Stone did what few in his profession could—he always thought for himself. America's most celebrated investigative journalist himself remains something of a mystery, however. Born Isidor Feinstein in Philadelphia, raised in rural New Jersey, by the age of 25 this college drop-out was already an influential newsman, and enjoying extraordinary access to key figures in New Deal Washington and the friendship of important artists in New York.

It is Guttenplan’s wisdom to see that the key to Stone’s achievements throughout his singular career—and not just in his celebrated I.F. Stone’s Weekly—lay in the force and passion of his political commitments. Stone’s calm, forensic, yet devastating reports on American politics and institutions sprang from a radical faith in the long-term prospects for American democracy.

His testimony on the legacy of American politics from the New Deal and World War II to the era of the civil rights struggles, the Vietnam War, and beyond amounts to as vivid a record of those times as we are likely to have. Guttenplan's lively, provocative book makes clear why so many of his pronouncements have acquired the force of prophecy.

Praise For American Radical: The Life and Times of I. F. Stone…

Praise for D.D. Guttenplan's The Holocaust on Trial: “Guttenplan sat through every day of the trial, and no wiser, more honest or more melancholy book will ever be written about it.” —Neal Ascherson “A mixture of superb reportage and serious reflection—about the role of Jewish identity politics in the United States, anti-Semitism in Britain and the historiography of the Cold War.” —Ian Buruma, New Yorker “An exemplary book.” —Observer “Well written . . . this is the best overall account we have so far of the trial as a whole and the personalities involved in it.” —Richard J. Evans, Sunday Telegraph