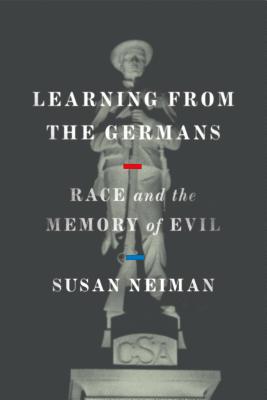 Learning from the Germans


Praise For Learning from the Germans: Race and the Memory of Evil…

"Firmly convinced of the exceptional nature of their country, many Americans resist opportunities to learn from the history of others . . . [Susan Neiman] has written a corrective." —Andrew Moravcsik, Foreign Affairs

“Incisive, vivid and highly readable, forceful in its impact and unsettling in many of its revelations." —David Donoghue, The Dublin Review of Books

“Neiman’s book is an informative and stimulating read, provocatively addressing questions that, sadly, remain all too relevant today . . . A fascinating mixture of analysis and anecdote in which Neiman’s own intelligent voice can be clearly heard throughout." —Mary Fulbrook, BBC History Magazine

“The accomplishment of this book is that it asks how we can live in a world riven with evil—evil that we may have tolerated or even perpetrated. The kind of communal reckoning Neiman identifies is hard but necessary . . . Crafting a narrative that acknowledges our collective sins can set us up to envision a society that reimagines justice.” —Chris Hammer, Christian Century

“Comparing German and American attempts to reckon with the past is a worthy exercise . . . [A] very persuasive case for reparations . . . The United States’ debate about its own past is enriched by books like this one, and it could use another ten like it.” —Heather Souvaine Horn, The New Republic

“While Neiman makes it clear that she has a personal stake in truth-telling and historical memory, the great strength in the book is her argument that we all have a stake . . . Profoundly thought-provoking . . . In a stirring final section, Neiman invites us to think more deeply about who suffered the real harms, then and now, and what practical steps we can take to begin working off the past and addressing the unanswered questions of justice.” —Jeremy Rutledge, The Post and Courier (Charleston, SC)

“[Neiman] declares a different kind of hope . . . Learning from the Germans is an important book for showing us a path we can follow.” —Y.S. Fing, Washington Independent Review of Books

“Thought-provoking . . . A stimulating . . . exploration of moral myopia in the face of unnecessary suffering.” —Ian Thomson, The Spectator (UK)

“[Neiman] allows the voices of those involved in thinking about how to address public memory to animate her pages . . . Firmly focused.” Eric Banks, Bookforum

Susan Neiman is the director of the Einstein Forum. Her previous books, which have been translated into many languages, include Why Grow Up?: Subversive Thoughts for an Infantile Age; Moral Clarity: A Guide for Grown-Up Idealists; Evil in Modern Thought: An Alternative History of Philosophy; The Unity of Reason; and Slow Fire: Jewish Notes from Berlin. She also writes cultural and political commentary for diverse media in the United States, Germany, and Great Britain. Born in Atlanta, Georgia, Neiman studied philosophy at Harvard and the Free University of Berlin, and was a professor of philosophy at Yale and Tel Aviv Universities. She is the mother of three grown children, and lives in Berlin.
Loading...
or support indie stores by buying on