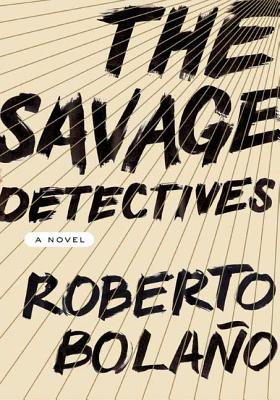 New Year's Eve, 1975: Arturo Belano and Ulises Lima, founders of the visceral realist movement in poetry, leave Mexico City in a borrowed white Impala. Their quest: to track down the obscure, vanished poet Cesarea Tinajero. A violent showdown in the Sonora desert turns search to flight; twenty years later Belano and Lima are still on the run.

The explosive first long work by "the most exciting writer to come from south of the Rio Grande in a long time" (Ilan Stavans, "Los Angeles Times"), "The Savage Detectives "follows Belano and Lima through the eyes of the people whose paths they cross in Central America, Europe, Israel, and West Africa. This chorus includes the muses of visceral realism, the beautiful Font sisters; their father, an architect interned in a Mexico City asylum; a sensitive young follower of Octavio Paz; a foul-mouthed American graduate student; a French girl with a taste for the Marquis de Sade; the great-granddaughter of Leon Trotsky; a Chilean stowaway with a mystical gift for numbers; the anorexic heiress to a Mexican underwear empire; an Argentinian photojournalist in Angola; and assorted hangers-on, detractors, critics, lovers, employers, vagabonds, real-life literary figures, and random acquaintances.

A polymathic descendant of Borges and Pynchon, Roberto Bolano traces the hidden connection between literature and violence in a world where national boundaries are fluid and death lurks in the shadow of the avant-garde. "The Savage Detectives "is a dazzling original, the first great Latin American novel of the twenty-first century.


Praise For The Savage Detectives…

International Praise for Roberto Bolaño and The Savage Detectives:

"One of the most respected and influential writers of [his] generation . . . At once funny and vaguely, pervasively, frightening." --John Banville, The Nation

"An event…The Savage Detectives [is] a brutal and lyrical vision of the last thirty years of the millennium." --Fabienne Dumontet, Le Monde des Livres

"Certain books go by too quickly. We wish they'd last longer and count the pages, not out of boredom, but out of anxiety at having to tell the characters goodbye. The Savage Detectives is one of these books…In the twists and turns of its mock-scholarly construction, The Savage Detectives succeeds in capturing both the fever of the past and the terrible, impossible yearning to have it back." --Fabrice Gabriel, Les Inrockuptibles

"Bolaño, it seemed to me, hovers over many young Latin American writers, even those in their 40s, the way Garciá Márquez must have over his generation and the following one." --Francisco Goldman, The New York Times

"Powerful and disorienting . . . [Bolaño's] books are bursting with humour that is both raw and sophisticated." --Angel Gurria-Quintana, The Financial Times

"Bolaño is a prodigious storyteller on the level of Thomas Pynchon and Don DeLillo." --Elena Hevia, El Periodico

"The great Mexican novel of its generation . . . By turns sublime and sinister, The Savage Detectives is a magnificent portrait of an era--and of every era in which people experience literature as passionately as life itself." --J. A. Masoliver Ródenas, La Vanguardia

"One of the most important novels in modern Latin-American literature." --Rulo Melchert, Sächsischen Zeitung

"[Bolaño's work is] something extraordinarily beautiful and (at least to me) entirely new…Reading Roberto Bolaño is like hearing the secret story, being shown the fabric of the particular, watching the tracks of art and life merge at the horizon and linger there like a dream from which we awake inspired to look more attentively at the world." --Francine Prose, The New York Times Book Review

"The Savage Detectives gave us the first real signs that the parade of Amazonian roosters was coming to an end: it marked the beginning of the end for the high priests of the Boom and all their local color . . . It also introduced us to an astonishing writer who reminded us how much deep joy there was in the passion of reading and, at the same time, spent his days on the edge of an abyss that no one else had ever noticed. What was he doing there? He was writing, on a ledge overlooking the void. In retrospect, The Savage Detectives must be considered--along with his giant, posthumous 2666--one of the two major axes of Bolano's extaordinary, already legendary work." --Enrique Vila-Matas, Le Magazine Littéraire

Born in Chile in 1953, Roberto Bolano fled to Mexico after the military government took power in the late 1960s. There he helped found the infrarealist movement. He later settled with his wife and children in northern Spain, where he died in 2003. He received all of that country's highest literary awards, including the Romulo Gallegos Prize for The Savage Detectives. In 2004 he was honored by the First Conference of Latin American Authors as "the most important literary discovery of our time."
Loading...
or
Not Currently Available for Direct Purchase