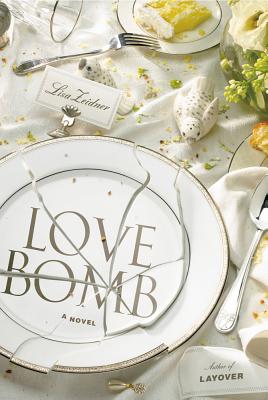 An inventive, mordantly funny novel about love, marriage, stalkers, and the indignities of parenthood

Lisa Zeidner's audacious novel "Love Bomb "begins as a hostage drama and blossoms into a far-reaching tale about the infinite varieties of passion and heartbreak.

Who has offended this nutcase, and how? Does she seek revenge against the twice-divorced philanderer? Or is her agenda political against the army general? Or the polygamous Muslim from Mali? While the warm, wise Helen attempts to bond with the masked woman and control the hysteria, the hostages begin to untangle what connects them to one another, and to their captor. But not until the SWAT team arrives does "the terrorist of love" unveil her real motives . . .

“It’s been a while since I’ve read a satire as deft and ambitious as Lisa Zeidner’s Love Bomb. It’s a wildly entertaining read.” —Richard Russo, author of That Old Cape Magic and Empire Falls

“Cry at weddings? No? You probably would once Lisa Zeidner’s badass avenging feminist showed up in her gas mask and took you hostage—at least once you got done clutching your gut from the hilarity. Reading Love Bomb is like viewing the world through special glasses that make your perception off-kilter, keener, more attuned to the tragicomedy that surrounds us, to the gonzo miracle of love’s outrageous resilience.” —Karen Russell, author of Swamplandia!


“If Jane Austen had lived to witness 9-11, Lisa Zeidner’s witty and terrifying comedy of romantic manners is what she would have written. It’s brilliant, funny and scary.” —Rafael Yglesias, author of A Happy Marriage

Lisa Zeidner has published five novels, including the critically acclaimed "Layover," and two books of poems. Her stories, reviews, and essays have appeared in "The New York Times," "Slate," "GQ," "Tin House," and elsewhere. She directs the M.F.A. program in creative writing at Rutgers University in Camden, New Jersey.
Loading...
or
Not Currently Available for Direct Purchase