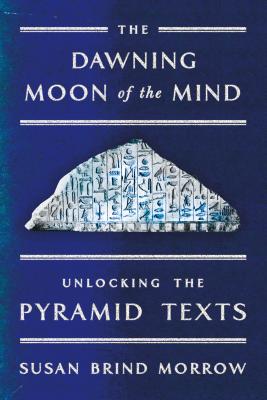 The Dawning Moon of the Mind

A stunning and original interpretation of an ancient system of poetic, religious, and philosophical thought

Buried in the Egyptian desert some four thousand years ago, the Pyramid Texts are among the world’s oldest poetry. Yet ever since the discovery of these hieroglyphs in 1881, they have been misconstrued by Western Egyptologists as a garbled collection of primitive myths and incantations, relegating to obscurity their radiant fusion of philosophy, scientific inquiry, and religion.

Now, in a seminal work, the classicist and linguist Susan Brind Morrow has recast the Pyramid Texts as a coherent work of art, arguing that they should be recognized as a formative event in the evolution of human thought. In The Dawning Moon of the Mind she explains how to read hieroglyphs, contextualizes their evocative imagery, and interprets the entire poem. The result is a magisterial religious and philosophical text revealing a profound consciousness of the world with astonishing parallels to Judeo-Christian culture, Buddhism, and Tantra.

More than twenty years in the making, The Dawning Moon of the Mind is a monumental achievement that locates one of the origins of poetic thought in Western culture. Almost before science, art, and written language, these texts set forth the relationship between time and eternity, life and death, history and ideas. In The Dawning Moon of the Mindthey emerge in their original luminosity and intelligence alongside a persuasive argument for their central importance to the history of language.


Praise For The Dawning Moon of the Mind: Unlocking the Pyramid Texts…

"In this exciting book, Morrow . . . provides a radical new translation and a line-by-line exegesis." —The New Yorker

"With a brilliant combination of literary criticism, cultural history, and linguistic expertise, archaeologist Morrow . . . provides a dazzling new translation of the hieroglyphs of the pyramid of Unis (built in 2323 B.C.E.) as well as a detailed and thoughtful guide to interpreting hieroglyphs and understanding the culture that produced them. . . . Most translations misinterpret the Pyramid Texts to be the stories of animals and gods, but Morrow’s translation and interpretation reveal them to be the story of the invention of time and an examination of the ways in which humanity is deeply embedded in the cosmic." —Publishers Weekly

“With the skill of a scholar and the sensibility of a poet, Susan Morrow opens the language of hieroglyphs.”
—Elaine Pagels, author of The Gnostic Gospels

“Susan Brind Morrow has given us a work of sublime intelligence and importance in which she manages with kindness and courtesy to explode the old myths of the Pyramid Texts, revealing a cascade of new and hitherto-unknown truths about the wisdom of the Egyptian ancients. The Dawning Moon of the Mind is beautifully and wisely crafted—a treasure-house of secrets that is a perfect joy to read.”
—Simon Winchester, author of The Professor and the Madman: A Tale of Murder, Insanity, and the Making of the Oxford English Dictionary

“Bringing a much-needed poetic and visual sensitivity to the Pyramid Texts, Susan Brind Morrow shows that they are indeed deeply visual and poetic in their language, and she makes a compelling case that they need reinterpretation. The author’s deep knowledge of Egypt and affection for the land, along with her long-time immersion in Arabic, give The Dawning Moon of the Mind a remarkable range and immediacy.”
—Roger Bagnall, Leon Levy Director, Institute for the study of the Ancient World, New York University

“This is a profound and profoundly inspiring book, a work of the scholarly heart, the feeling mind.”
—Verlyn Klinkenborg, author of The Rural Life

Susan Brind Morrow studied classics, Arabic, and Egyptology at Columbia University. She has traveled extensively in Egypt and Sudan, working as an archaeologist and studying natural history, language, and the uses of poetry. Her first book, The Names of Things: A Passage in the Egyptian Desert, was a finalist for the PEN Martha Albrand Award for the Memoir in 1998. She is also the author of Wolves and Honey: A Hidden History of the Natural World and is the recipient of a Guggenheim fellowship for her work on the Pyramid Texts.
Loading...
or support indie stores by buying on
(This book is on backorder)