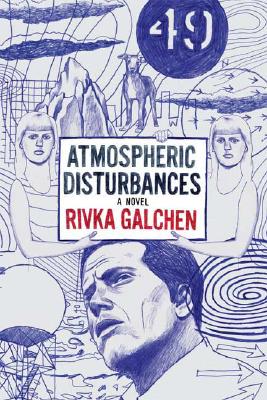 “Dr. Leo Liebenstein has some problems: his delusional patient is missing, his wife has been replaced by a simulacrum and he has to start a new job controlling the weather down in Patagonia on Monday morning! Rivka Galchen's debut novel is hilarious, heartbreaking, and fully enthralling.”
— Alexis Akre, Olsson's Books & Records, Washington, DC
View the List

When Dr. Leo Liebenstein's wife disappears, she leaves behind a single, confounding clue: a woman who looks, talks, and behaves exactly like her--or "almost "exactly like her--and even audaciously claims to be her. While everyone else is fooled by this imposter, Leo knows better than to trust his senses in matters of the heart. Certain that the original Rema is alive and in hiding, Leo embarks on a quixotic journey to reclaim his lost love. With the help of his psychiatric patient Harvey--who believes himself to be a secret agent who can control the weather--Leo attempts to unravel the mystery of the spousal switch. His investigation leads him to the enigmatic guidance of the meteorologist Dr. Tzvi Gal-Chen, the secret workings of the Royal Academy of Meteorology in their cosmic conflict with the 49 Quantum Fathers, and the unwelcome conviction that somehow he--or maybe his wife, or maybe even Harvey--lies at the center of all these unfathomables. From the streets of New York to the southernmost reaches of Patagonia, Leo's erratic quest becomes a test of how far he is willing to take his struggle against the seemingly uncontestable truth he knows in his heart to be false. "Atmospheric Disturbances "is at once a moving love story, a dark comedy, a psychological thriller, and a deeply disturbing portrait of a fracturing mind. With tremendous compassion and dazzling literary sophistication, Rivka Galchen investigates the moment of crisis when you suddenly realize that the reality you insist upon is no longer one you can accept, and the person you love has become merely the person you live with. This highly inventive debut explores the mysterious nature of human relationships, and how we spend our lives trying to weather the storms of our own making.

Rivka Galchen recieved her MD from the Mount Sinai Shool of Medicine, having spent a year in South America working on public health issues. Galchen recently completed her MFA at Columbia University, where she was a Robert Bingham Fellow. Her essay on the Many Worlds Interpretation of quantum mechanics was published in "The Believer," and she is the recipient of a 2006 Rona Jaffe Foundation Writers' Award. Galchen lives in New York City. This is her first novel.


"An original and sometimes affecting novel, one that knows how to move from the comic to the painful.”—James Wood, The New Yorker


“The story is genuinely suspenseful, and Leo’s clause-heavy patter feels fresh and wry—his perspective curiously weird—even as he unravels. Ms Galchen is a writer to be watched.”—The Economist


"Witty, tender, and conceptually dazzling, Galchen’s metaphysical tale of longing, grief, love, and the volatility of the self gracefully charts the tempestuous weather of the human psyche.” —Booklist (starred review)

"Enthralling . . . Don't be surprised if this gives you a Crying of Lot 49 nostalgia hit."—Publishers Weekly (starred review)

"Everything is other than it appears to be in Galchen's assured debut—an intricate puzzle powered by an urgently beating heart . . . A superb first novel."—Kirkus Reviews (starred review)

"Galchen's astonishing debut is rich in detail and scientific exploration and a kind of dreamy psychological dissembling that keeps the reader as baffled as Leo right to the end. This dense, brilliant novel should be much in demand."—Library Journal

"Galchen has created a heart breaking puzzle of a novel. Hilarious and daring. The novel tracks the way we seek to destroy our most precious love affairs and, in doing so, our own sanity. The hero, Leo, is like a brilliant mad scientist trying to prove that the earth is flat, because he desperately needs a ledge high enough to jump off of."   —Heather O’Neill, author of Lullabies for Little Criminals

"Rivka Galchen has written a powerful novel about love, longing, Doppler radar, and the true appreciation of a nice cookie with your tea.  Atmospheric Disturbances is fantastic.” —Nathan Englander, author of The Ministry of Special Cases

“Reader, you are holding in your hand one of my favorite novels ever: Rivka Galchen's divinely hilarious, heartbreaking tale of Leo's search for his "lost" wife Rema. This is a novel of Borgesian erudition, wit, and playfulness, though its obsessively pursued subject --as it rarely was in the Argentine's fiction - is love, the enraptured lover, and the mystery of the beloved, the intersection of love's fictions, realities, and pathologies. It is also as funny as any episode of the Simpsons (imagine Homer as a besotted and brilliant New York psychiatrist). The prose jumps with one astonishing observation, insight, and description after another. Atmospheric Disturbances delivers unforgettable joy.”  —Francisco Goldman, author of The Divine Husband

“Erudite and chock-full of heartache, Rivka Galchen's virtuosic "debut" novel reads like the work of a cutting-edge literary alchemist who has created in her laboratory the Book of the Now. Part thriller, part romance, part autobiography, part psychological study, her book's sweetly skewed brilliance and stealth-bomb sadness will make you swoon with this realization: yes, these kinds of books are still possible.”  —Heidi Julavits, author of The Uses of Enchantment