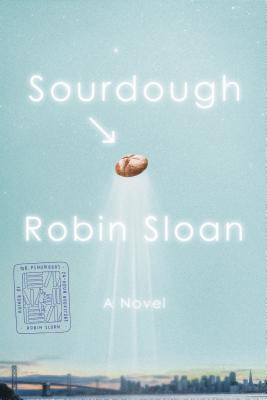 Named one of the best books of 2017 by NPR, San Francisco Chronicle, Barnes & Noble, and Southern Living

Lois Clary is a software engineer at General Dexterity, a San Francisco robotics company with world-changing ambitions. She codes all day and collapses at night, her human contact limited to the two brothers who run the neighborhood hole-in-the-wall from which she orders dinner every evening. Then, disaster! Visa issues. The brothers close up shop, and fast. But they have one last delivery for Lois: their culture, the sourdough starter used to bake their bread. She must keep it alive, they tell her—feed it daily, play it music, and learn to bake with it.

Lois is no baker, but she could use a roommate, even if it is a needy colony of microorganisms. Soon, not only is she eating her own homemade bread, she’s providing loaves daily to the General Dexterity cafeteria. The company chef urges her to take her product to the farmer’s market, and a whole new world opens up.

When Lois comes before the jury that decides who sells what at Bay Area markets, she encounters a close-knit club with no appetite for new members. But then, an alternative emerges: a secret market that aims to fuse food and technology. But who are these people, exactly?

Leavened by the same infectious intelligence that made Robin Sloan’s Mr. Penumbra’s 24-Hour Bookstore such a sensation, while taking on even more satisfying challenges, Sourdough marks the triumphant return of a unique and beloved young writer.


Praise For Sourdough: A Novel…

“Robin Sloan's delightful new novel, Sourdough… displays both lightness and a yearning for escape, but only in the best sense.” —Jeff Vandermeer, author of Borne, in LA Times

“Sourdough rises like a good loaf . . . Beautiful . . . Fight Club meets The Great British Bake Off . . . [Sourdough] knows as much about the strange extremes of food as Mr. Penumbra did about the dark latitudes of the book community. [Sloan’s] voice . . . fits so beautifully into the time and place and moment he is writing about.” —Jason Sheehan, NPR Books

"Delicious fun . . . a novel as delectable as its namesake." —Elizabeth Hand, The Washington Post

“Fascinating . . . insightful . . . One of the more cogent novels this year on the fertile tensions that exist between culture and technology” —Andy Newman, The Atlantic

"If you’ve ever been confused about what’s artificial and what’s authentic—can you really tell anymore?—Sourdough is a book for you." —Jeffery Gleaves, The Paris Review Daily

"Sloan’s prose is sharp, and his critiques of capitalism, Silicon Valley and foodie culture are finely cut." —Everdeen Mason, The Washington Post

“Baking, foodie culture, and a club made up of women named Lois all figure in this charming story about a coder slogging away at a trendy tech company. When friends give her some sourdough starter and she begins making her own bread, everything changes.” —Entertainment Weekly

“A culinary delight . . . Sourdough is the story we all secretly dream about. Could we leave our mundane lives and take a leap of faith in the direction of our newfound passion? Sloan takes readers on a thought-provoking journey to answer that question and asks them to consider the irony that it takes a living concoction of yeast and microbes to force Lois to consider living her best life.” —Lincee Ray, The Associated Press

“[Sourdough] plunges through so much terrain: microbial nations, assimilation and tradition, embodied consciousness and the crisis of the tech industry, all without losing the light, sweet, ironic Sloanian voice familiar from Mr. Penumbra’s, a plot that makes the book a page-turner and a laugh-out-louder, with sweetness and romance and tartness and irony in perfect balance. What a great book, seriously.” —Cory Doctorow, Boing Boing

"As he did in Mr. Penumbra's 24-Hour Bookstore, Robin Sloan will have readers looking for magic in the mundane." —Nora Horvath, Real Simple

“[Sourdough] fuses the story of worker alienation and embodied consciousness and microbiomes and microbiology with robotics in a beautiful way . . . A Robert Pirsig or Armisted Maupin kind of novel, but it’s about robotic arms and sourdough bread!” —Cory Doctorow of Boing Boing on KDNK Radio

“On the crust, Sourdough is a buddy book . . . But slice a little deeper, and you will discover, Sourdough is a novel about work . . . Sloan's sense of place is palpable, and his prose is dusted with luxurious lines to be savored . . .” —David LaBounty, Dallas Morning News

“In his novel Mr. Penumbra’s 24-Hour Bookstore, Sloan unraveled a mystery about a web designer who takes a job in a peculiar all-night Bay area book shop. New technology clashed, then melded, with classic history. Sourdough promises a similar sort of tech and analog mashup, in this case involving the food industry: a software engineer learns to bake bread and uncovers a secret underground market.” —The Miami Herald

“Sloan has imagined a funny and curious novel unlike anything else, a perfect combination of self-discovery through all sorts of weird passions. Like truly good sourdough, this namesake is the perfectly tangy, chewy, and airy addition to anyone’s reading list—minus the gluten and calories, of course.” —Chika Gujarathi, BookPage

"Filled with crisp humor and weird but endearing characters . . . At once a parody of startup culture and a foodie romp . . . [A] delight, perfect for those who like a little magic with their meals." —Booklist (starred review)

“How many novels can boast an obstreperous sourdough starter as a key character? A delightful and heartfelt read.” —Library Journal

"Sloan's comic but smart tone never flags, and Lois is an easy hero to root for." —Kirkus Reviews

Robin Sloan grew up in Michigan and now splits his time between San Francisco and the Internet. He is the author of Mr. Penumbra's 24-Hour Bookstore and Sourdough.
Loading...
or
Not Currently Available for Direct Purchase