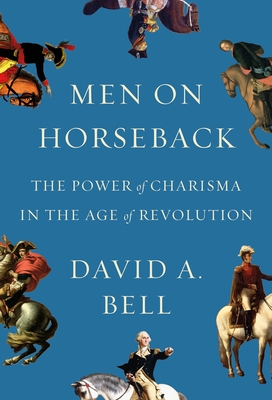 The Power of Charisma in the Age of Revolution

"In his lucid and bracing history, [David] Bell helps us better understand how [a] charismatic grifter came to occupy the most powerful office in the world . . . Bell’s description of our predicament makes for essential reading." —Robert Zaretsky, Los Angeles Review of Books

In Men on Horseback, the Princeton University historian David A. Bell offers a dramatic new interpretation of modern politics, arguing that the history of democracy is inextricable from the history of charisma, its shadow self.

Bell begins with Corsica’s Pasquale Paoli, an icon of republican virtue whose exploits were once renowned throughout the Atlantic World. Paoli would become a signal influence in both George Washington’s America and Napoleon Bonaparte’s France. In turn, Bonaparte would exalt Washington even as he fashioned an entirely different form of leadership. In the same period, Toussaint Louverture sought to make French Revolutionary ideals of freedom and equality a reality for the formerly enslaved people of what would become Haiti, only to be betrayed by Napoleon himself. Simon Bolivar witnessed the coronation of Napoleon and later sought refuge in newly independent Haiti as he fought to liberate Latin America from Spanish rule. Tracing these stories and their interconnections, Bell weaves a spellbinding tale of power and its ability to mesmerize.

Ultimately, Bell tells the crucial and neglected story of how political leadership was reinvented for a revolutionary world that wanted to do without kings and queens. If leaders no longer rule by divine right, what underlies their authority? Military valor? The consent of the people? Their own Godlike qualities? Bell’s subjects all struggled with this question, learning from each other’s example as they did so. They were men on horseback who sought to be men of the people—as Bell shows, modern democracy, militarism, and the cult of the strongman all emerged together.

Today, with democracy’s appeal and durability under threat around the world, Bell’s account of its dark twin is timely and revelatory. For all its dangers, charisma cannot be dispensed with; in the end, Bell offers a stirring injunction to reimagine it as an animating force for good in the politics of our time.


Praise For Men on Horseback: The Power of Charisma in the Age of Revolution…

"It is impossible to read Men on Horseback, David A. Bell’s masterful account of charisma in modern history, without thinking about Men in Golf Carts. Though Donald Trump is never mentioned, our nation’s very own 'He Who Must Not Be Named' casts a malign shadow over almost every page. In his lucid and bracing history, Bell helps us better understand how this charismatic grifter came to occupy the most powerful office in the world . . . In his rich and rewarding portraits of George Washington, Napoleon Bonaparte, Toussaint Louverture, and Simón Bolívar, Bell traces the various arcs of this volatile dynamic . . . Bell’s description of our predicament makes for essential reading." —Robert Zaretsky, Los Angeles Review of Books

"[Bell] is alive to the tension between revolutionary ideologies of freedom, democracy, equality and fraternity and the violence and repression that can be unleashed in their name . . . Men on Horseback is witty and elegant, a series of deft interlocking biographies." —Padraic Scanlan, The Guardian

"Much of Men on Horseback’s appeal lies in its wonderful cast of characters . . . Charisma, as Bell reminds us, is relational: it is both about the heroic qualities of individuals, and the myriad ways in which these are assimilated and celebrated by their admirers. Men on Horseback offers fascinating glimpses of this dialectic at work—not least among the leaders themselves." —Sudhir Hazareesingh, The Times Literary Supplement

"One of Bell’s insights is to see the man on horseback as a genre. His engaging survey of the four major early-modern revolutions traces the way their messianic leaders learned from and imitated one another, as did the chroniclers who gilded their names . . . He advocates for the cultural study of leadership, of the way that shifts in technology, religious belief, and literary taste shape the exercise of personality-driven power." —Julian Lucas, Harper's

"[Bell's] purpose, broadly speaking, is to assess the role of charisma in modern political culture while also outlining a new interpretation of the age of supposedly democratic revolutions . . . [He] makes the case that there is, and always has been, a vanishingly thin line between charismatic democratic rulers and charismatic authoritarians . . . [Men on Horseback] can help us assess the dangers facing democracy today." —Scott Spillman, The Point

"[A] fluid and thought-provoking survey of political charisma . . . Bell skillfully explores the links between his subjects and draws insightful comparisons and contrasts between them . . . This erudite and entertaining “great man” history helps to explain the modern reemergence of autocratic leaders around the world." —Publishers Weekly

"An examination of hero worship via thoughtful biographies of George Washington and four contemporary leaders who were all idolized at the time . . . A disturbing theme explored by a capable historian." —Kirkus Reviews

"Using the concept of charisma to illuminate political leadership in the age of democratic revolutions, one of our great historians of the eighteenth-century Atlantic world has created a beautifully crafted book." —Gordon S. Wood, university professor emeritus at Brown University and author of Friends Divided and The Radicalism of the American Revolution, among other works

"In this gripping and masterful study, David A. Bell uncovers and explains a mystery about 18th- and early 19th-century revolutions: how come uprisings undertaken in the name of the people so often celebrated and elevated one great man? Building on Max Weber’s theory of charisma, Bell brilliantly explores how democracies crave a strong ruler." —Dan Edelstein, William H. Bonsall Professor of French at Stanford University and author of On the Spirit of Rights and The Enlightenment: A Genealogy

"No one could have predicted before it happened that the rise of modern self-government would end up exalting mythic statesmen who lead the people and soar above them—for better and for worse. There is no era better suited to grappling with this paradox than the Age of Revolution, when demiurgic and sometimes demagogic political icons became folk heroes—and no better historian to explore how than David Bell, who, with his characteristic talent and fluent writing, proves the need to take charisma seriously in order to reckon with both the past and the present." —Samuel Moyn, Henry R. Luce Professor of Jurisprudence and professor of history at Yale University

"Men on Horseback is a thoughtful and provocative book, one that challenges our vision of the Enlightenment and the era of Atlantic revolutions. David Bell explores one of the greatest paradoxes of modern politics: why the rise of democratic ideals, at the end of the eighteenth century, was accompanied by the worship of great men and the appeal of authoritarian rulers. This book reminds us that democracy is not only a matter of reasoning and deliberation, but also one of emotions—a brilliant, lucid, and disturbing lesson of history worth meditating upon." —Antoine Lilti, professor of history at EHESS and author of The Invention of Celebrity

"Charismatic leaders can destroy democracies. But as Men on Horseback shows, they were also needed to found them in the first place. With riveting stories and lucid prose, David A. Bell explores the promise and the perils of charisma from the time of George Washington until the present day." —Yascha Mounk, author of The People vs. Democracy

"Men on Horseback brilliantly recounts how ordinary people seeking political liberty routinely yoked themselves to patriotic saviors from George Washington to Simon Bolivar—a harbinger of our own paradoxical era of demagogues and democratic revolts." —James Miller, author of Can Democracy Work?

"Men on Horseback is a vivid analysis of the emergence of a modern political phenomenon, brilliantly written with keen historical insight." —Keith Michael Baker, J. E. Wallace Sterling Professor in the Humanities at Stanford University and author of Inventing the French Revolution

David A. Bell is the Sidney and Ruth Lapidus Professor in the Era of North Atlantic Revolutions at Princeton University and the author of several previous books, among them The First Total War and Shadows of Revolution.
Loading...
or support indie stores by buying on