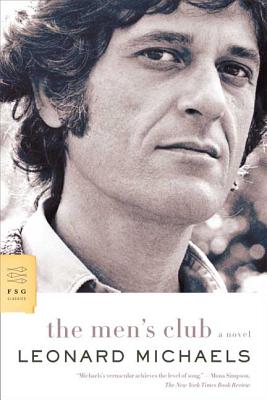 Seven men, friends and strangers, gather in a house in Berkeley. They intend to start a men's club, the purpose of which isn't immediately clear to any of them; but very quickly they discover a powerful and passionate desire to talk. First published in 1981, The Men's Club is a scathing, pitying, absurdly dark and funny novel about manhood in the age of therapy. "The climax is fitting, horrific, and wonderfully droll" (The New York Times Book Review).

Leonard Michaels (1933-2003) was the author of Going Places, I Would Have Saved Them If I Could, and The Men's Club, among other books. FSG will publish his Collected Stories in June to coincide with the reissue of Sylvia.

Praise For The Men's Club: A Novel (FSG Classics)…

“Chekhov and Kafka, after consulting Chaucer, might have collaborated on The Men's Club. It is excellent.” —John Leonard, The New York Times

“Leonard Michaels's stories stand alongside those of his best Jewish contemporaries--Grace Paley and Philip Roth. Like theirs, Michaels's vernacular achieves the level of song.” —Mona Simpson, The New York Times

“Leonard Michaels was an original; everything he wrote, like it or not, came alive. His prose moved at a fast clip and paid readers the compliment of assuming they could match his mental velocity, with a concise, pungent and pyrotechnic style that tolerated no flab.” —Philip Lopate, The Nation