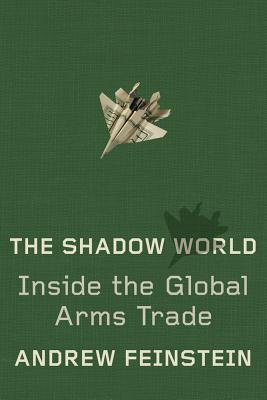 Inside the Global Arms Trade

The Shadow World is the harrowing behind-the-scenes tale of the global arms trade, revealing the deadly collusion that all too often exists among senior politicians, weapons manufacturers, felonious arms dealers, and the military—a situation that compromises our security and undermines our democracy.

Pulling back the curtain on this secretive world, Andrew Feinstein reveals the corruption and the cover-ups behind a range of weapons deals, from the largest in history—between the British and Saudi governments—to the guns-for-diamonds deals in Africa and the imminent $60 billion U.S. weapons contract with Saudi Arabia. He exposes in forensic detail both the formal government-to-government trade in arms and the shadow world of illicit weapons dealing, and lays bare the shockingly frequent links between the two. Drawing on his experience as a member of the African National Congress who resigned when the ANC refused to launch a corruption investigation into a major South African arms deal, Feinstein illuminates the impact this network has not only on conflicts around the world but also on the democratic institutions of the United States and the United Kingdom.

Based on pathbreaking reporting and unprecedented access to top-secret information and major players in this clandestine realm, The Shadow World places us in the midst of the arms trade’s dramatic wheeling and dealing—from corporate boardrooms to seedy out-of-the-way hotels—and reveals the profound danger and enormous financial cost this network represents to all of us.


Praise For The Shadow World: Inside the Global Arms Trade…

“Remarkable and courageous. There is enough in Feinstein's book for a dozen film pitches. Bizarre characters leap from the page . . . We knew the arms business was corrupt, but only a book as exhaustively researched as this one is able to reveal just how serious and extensive this corruption really is, and how democracy itself is threatened. The Shadow World is a heroic book by an author who, in writing it, has put himself in the firing line. We surely can't go on leaving this story to Hollywood. The global arms trade totalled $1.6 trillion in 2010, up 53% in 10 years. As the world plunges into a double dip recession, with huge stockpiles of weapons, the script is being written for the ultimate disaster movie.” — Sunday Herald “That the world is awash in weapons is not news. But the way weapons large and small flow from the United States, Britain and other producers to the world’s villains is ever astonishing. In The Shadow World, Andrew Feinstein gives us a sweeping and troubling story of how this happens, who benefits, and what consequences follow . . . [Feinstein] writes with a crusading spirit and a depth of detail that lend The Shadow World urgency and authority. Many of the sensational stories he tells have earned attention before, but he adds depth and shows how often patterns repeat . . . A comprehensive treatment of the arms trade, possibly the most complete account that has ever been written.” —John Tirman, The Washington Post “A devastating and scrupulously documented account of the greed, venality, and rampant corruption pervading the global arms trade.  Andrew Feinstein has produced a brilliant and massively important book.” — Andrew J. Bacevich, author of Washington Rules:  America's Path to Permanent War and Ret. Colonel, U.S. Army “Feinstein’s book is sound, timely and invaluable. Diligent readers will be rewarded.” —Kirkus Review (starred) “The Shadow World peels back the veil of secrecy behind which the global arms trade undermines accountable democracy, socioeconomic development, and human rights, causing suffering across the world. In the same way that Andrew Feinstein exposed a corrupt arms deal that darkened South Africa's rainbow nation, he has now turned his forensic gaze on the impact of similar weapons deals around the world. This book is essential reading for anyone who cares about justice, transparency, and accountability in both the public and private spheres, and for anyone who believes that it is more important to invest in saving lives than in the machinery of death.” —Archbishop Desmond Tutu

Andrew Feinstein is the author of "After the Party," a political memoir. He is currently an Open Society Institute Fellow and the founding codirector of Corruption Watch in London.
Loading...
or
Not Currently Available for Direct Purchase