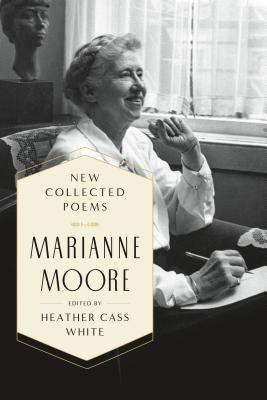 The landmark oeuvre of Marianne Moore, one of the major inventors of poetic modernism, has had no straight path from beginning to end; until now, there has been no good vantage point from which to see the body of her remarkable work as a whole. Throughout her life Moore arranged and rearranged, visited and revisited, a large majority of her existing poetry, always adding new work interspersed among revised poems. This makes sorting out the complex textual history that she left behind a pressing task if we mean to represent her work as a poet in a way that gives us a complete picture. New Collected Poems offers an answer to the question of how to represent the work of a poet so skillful and singular, giving a portrait of the range of her voice and of the modernist culture she helped create.

William Carlos Williams, remarking on the impeccable precision of Moore’s poems, praised “the aesthetic pleasure engendered when pure craftsmanship joins hard surfaces skillfully.” It is only in New Collected Poems that we can understand her later achievements, see how she refashioned her earlier work, and get a more complete understanding of her consummate craftsmanship, innovation, and attention to detail. Presented and collected by Heather Cass White, the foremost scholar of Moore’s work, this new collection at last allows readers to experience the untamed force of these dazzling poems as the author first envisioned them.

Marianne Moore (1887-1972) was an American poet, critic, editor, and translator, greatly admired for her formal innovations and her startling vision. Her poetry received many honors, including the Dial Award, the National Book Award, the Pulitzer Prize, and the Bollingen Prize. Her poetry books include Observations and New Collected Poems.

Heather Cass White received her PhD and MA from Cornell University. She teaches English at the University of Alabama in Tuscaloosa.

Heather Cass White received her PhD and MA from Cornell University. She teaches English at the University of Alabama in Tuscaloosa.

"A fresh perspective on the legacy of Marianne Moore . . . In this new volume, White, a professor at the University of Alabama, presents what she believes to be the best version of Moore's work, along with copious notes, and various versions of poems that Moore tinkered with over years or even decades. Readers and writers will benefit from seeing how Moore . . . drastically cut some of her most famous poems . . . With this book, White has not only given readers an authoritative compendium of Moore's work but an insightful critique of her writing process." —Elizabeth Lund, The Washington Post

“[Marianne Moore’s poems strike me] as miracles of language and construction. Why had no one ever written about things in this clear and dazzling way before?”—Elizabeth Bishop

“Heather Cass White has given us what must be the definitive edition of Marianne Moore, a poet unique enough to be celebrated by Wallace Stevens and William Carlos Williams. Her influence on such superb artists as Richard Wilbur, Elizabeth Bishop, and May Swenson testifies to her importance. More than ever, as barbarism threatens to flood us, we need the vital poets of our beleaguered nation.” —Harold Bloom

“With graceful ingenuity, Heather Cass White enables for the reader an often disparate (though always essential) art, by providing illuminating commentary from both Marianne Moore and herself. W. H.Auden best describes the consequence: ‘One of the few modern poets whom I can read on any day and in any mood.’” —Richard Howard

“Heather Cass White challenges Marianne Moore’s retrospective editorial control of her poems in order to present Moore’s work as her contemporaries would have encountered it. In so doing White deepens our access to Moore’s brilliance and idiosyncrasy while also expanding our sense of her work’s relation to its historical moment. This does not supplant Moore’s own editing but illuminates it. This does not end conversation about Moore’s indispensable poetry; it revitalizes it.” —Ben Lerner

“New Collected Poems is a wonderful gift to readers of Marianne Moore—there are versions of poems here that few of us have seen before—and it is sure to win new readers, too, of one of the brave originals of modern writing. Heather Cass White has edited these poems with a generous intelligence, and the notes and apparatus are exemplary for their tact.” —David Bromwich

“Heather Cass White has restored to us a Marianne Moore whom Moore herself partly abjured. Like Whitman, like Lowell, Moore was a notable and complex reviser of her earlier work. Just as many of us cherish the 1855 Leaves of Grass, Moore’s contemporaries prized the earlier versions of her stunning poems. Moore the editor may have betrayed Moore the earlier poet; certainly successive editions have obscured her first brilliances and the striking development of her work. A bold, brave, scrupulous and beautiful book, New Collected Poems give us Moore’s poems in their fullest first-published versions while also alerting us to their later permutations. Controversial this may be; a rigorous wonder it surely is. Moore’s poems shimmer in their sharp singularities—they are as fresh and freshening now as they were decades ago. This incomparable poet finally has the edition she deserves. Moore’s modernism is unobsolete. We have yet to take her measure, though she surely took ours. Her poems are, as Mandelstam wrote of Dante, ‘missiles for capturing the future.’ Blast off!” —Maureen N. McLane

"More Marianne Moore is always a delight. Maximal Moore, which is what Heather Cass White's gives us in this truly complete edition of the poems, is heaven. Over the years, and to the puzzlement of her readers, Moore rethought and altered already published work. This book lets us follow the track of the changes of mind of one of the finest poetic minds of the 20th century, diamond-sharp, ocean-deep." —Holland Cotter