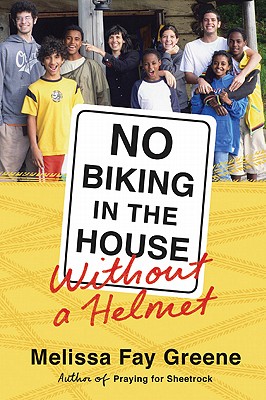 No Biking in the House Without a Helmet

Dispatches from the new front lines of parenthood

When the two-time National Book Award finalist Melissa Fay Greene confided to friends that she and her husband planned to adopt a four-year-old boy from Bulgaria to add to their four children at home, the news threatened to place her, she writes, "among the greats: the Kennedys, the McCaughey septuplets, the von Trapp family singers, and perhaps even Mrs. Feodor Vassilyev, who, according to the Guinness Book of World Records, gave birth to sixty-nine children in eighteenth-century Russia."

Greene is best known for her books on the civil rights movement and the African HIV/AIDS pandemic. She's been praised for her "historian's urge for accuracy," her "sociologist's sense of social nuance," and her "writerly passion for the beauty of language."

But Melissa and her husband have also pursued a more private vocation: parenthood. "We so loved raising our four children by birth, we didn't want to stop. When the clock started to run down on the home team, we brought in ringers."

When the number of children hit nine, Greene took a break from reporting. She trained her journalist's eye upon events at home. Fisseha was riding a bike down the basement stairs; out on the porch, a squirrel was sitting on Jesse's head; vulgar posters had erupted on bedroom walls; the insult niftam (the Amharic word for "snot") had led to fistfights; and four non-native-English-speaking teenage boys were researching, on Mom's computer, the subject of "saxing."

"At first I thought one of our trombone players was considering a change of instrument," writes Greene. "Then I remembered: they can't spell."

Using the tools of her trade, she uncovered the true subject of the "saxing" investigation, inspiring the chapter "Everything You Always Wanted to Know About Sex, but Couldn't Spell."

A celebration of parenthood; an ingathering of children, through birth and out of loss and bereavement; a relishing of moments hilarious and enlightening--"No Biking in the House Without a Helmet" is a loving portrait of a unique twenty first-century family as it wobbles between disaster and joy.


Praise For No Biking in the House Without a Helmet…

“Love knows no bounds—and no borders—in journalist Greene’s ebullient valentine to her family of nine children . . . ‘Who made you the Old Woman Who Lives in a Shoe?’ a friend quips, but Greene doesn’t apologize. Instead, she shows what it means to knit together a family that ‘steers by the light . . . of what feels right and true.’” —Caroline Leavitt, People (four stars)

“Readers . . . will find plenty of hilarity in this romping account of [Greene’s] boisterous brood . . . [she] brings her well-honed research and reporting skills to this very personal story . . . this joy—experiencing it and conveying it to readers—is her greatest success.” —Suki Casanave, The Washington Post


“No Biking in the House Without a Helmet is [Melissa Fay Greene’s] sprawling, imperfect, courageous and joyful account of the adoption process, warts and all—the heart-wrenching trips to orphanages, frustrating delays, visits with living relatives, and the way her family welcomed and made room for each child, as well as the inevitable homesickness and culture clashes and sometimes rocky emotional terrain . . . The moral of her story? Just the opposite of the title’s warning. Don’t be afraid to break the rules, to 'steer by the light of what makes us laugh, what makes us feel good'—especially if it means biking in the house, with or without a helmet. With deep compassion, sparkling humor and an unshakable faith in the power of the whoopee cushion, she leads the way.” —Gina Webb, Atlanta Journal-Constitution


“Moving, enlightening, and surprisingly funny ... No Biking in the House Without a Helmet ... folds an adoption primer into a meditation on family.” —Sara Nelson, O, The Oprah Magazine


“Joyful and big-hearted . . . This funny and frankly personal book is a departure for Greene, whose previous work has been sober and measured. The title sounds like a madcap domestic comedy in the tradition of Jean Kerr and Erma Bombeck, which it sometimes is. But Greene’s humor is less acerbic, her persona less addled . . . Greene is such an open and self-deprecating narrator she makes every addition to her family seem like the most natural and beautiful move in the world, ‘each child—whether homemade or foreign born—a revelation, a treasure.’ The ability to write brilliant books with a houseful of children is clearly the least of Greene's gifts.” —Jennifer Reese, NPR.org

“There are funny parenting books and wise parenting books. Rarely a funny and wise parenting book. Melissa Fay Greene really does have nine children, five of whom were adopted from foreign orphanages—but this book isn’t a treacly, multicultural ‘Brady Bunch.’ Neither moralistic nor preachy, this memoir is about what it’s like to have heart, and grow children with heart. In another writer’s less deft hands, children who herded goats in Ethiopia and then relocated to a big old house in Atlanta could have become a Southern Jewish version of Brad and Angelina. Greene captures the wild vicissitudes of her family’s life and how individual difference enriches them all.” —Elizabeth Taylor, Chicago Tribune


“For the past 21 years Melissa Fay Greene has been raising nine children, both biological and adopted. In her memoir No Biking in the House Without a Helmet, she writes of the many parenting obstacles she has encountered, overcome, and met again as the rules change completely for her second wave of children. Talk about a story for the ages.”  —Town & Country


“A truly heartfelt memoir . . . [Greene] resists the urge to be cloying, however, infusing each chapter with a strong dose of humor and not shying away from the difficulties presented by adopting older children . . . It’s all one big, happy family but also a very real one. Call them the twenty-first-century Waltons, and revel in the joy they have found and brought home for keeps.” —Colleen Mondor, Booklist (starred review)

“Greene is a writer of emotional impact . . . Her words are flush with humanity and all the messiness and comedy that humanity trails in its wake. She goes the distance, which is a beautiful thing to behold . . . Eventually, an enveloping sweetness and involvement swept away all but what is elementally grand about being a parent and nursing a child. An upbeat chronicle of a life that has been lived on the bright side of the road, its ruts beveled by naked love.” —Kirkus Reviews

“Joy to the world. Line by glorious line, with raw honesty and unforced hilarity, Melissa Fay Greene tells the story of the true mega-family of the millennium, which is not some reality-show curiosity shop, but her very own nine children: those who came home from the hospital and those who came home from the airport. People often assure me that I’ll laugh and cry reading a book. I may smile; I may feel a lump in my throat. But I wept a dozen times reading No Biking and woke my own kids up with my laughter, as I stayed up all night with this, the Cheaper by the Dozen for a new planet. Melissa Fay Greene never set out to raise the world, only to raise her children. With this book, she raises the bar, wherever the word ‘family’ is spoken, for every single one of us.” —Jacquelyn Mitchard, author of The Deep End of the Ocean and Second Nature: A Love Story

“The funniest part of this book is not the fact that several of Melissa Fay Greene’s nine children were once Ethiopian goat herders. The funniest part is that she has nine children. She not only loves and appreciates every one, she brings them all to vivid life with affection, exasperation, candor, and (indispensable, under the circumstances) humor. I went from Are you kidding? to I love these people! in four pages flat.” —Marilyn Johnson, author of This Book Is Overdue!

“Brimming with humor and love, the story of Greene’s ever-expanding family is both unique and universal. Not everyone watches a son spear a Frisbee in mid-flight or weave a bullwhip out of the suburban shrubbery. But everyone at some point asks what it means to be a parent, a sibling, a family. Greene answers these questions with wit and wisdom. I finished her book with a renewed conviction that it is possible to shrink this wide world and to begin to bridge the chasms that have opened between us.” —Geraldine Brooks, author of People of the Book and March

“About every five years, we get a book from Melissa Fay Greene. I’ve learned to wait for them eagerly, always excited to know what this thoughtful, sensitive writer is going to do next. Now—No Biking in the House Without a Helmet. That title tells you in no uncertain terms that you will laugh, but there’s a lot more in these pages than humor, including Melissa’s trademark generosity, optimism, winning self-deprecation, and high spirits. As a writer, a reader, and—like Melissa—the parent of an adopted child, I’m glad to know that this book will soon be out, and I hope it finds a very large audience.” —David Guterson, author of The Other and Snow Falling on Cedars

Melissa Fay Greene is the author of "Praying for Sheetrock," "The Temple Bombing," "Last Man Out," and "There Is No Me Without You." Two of her books have been finalists for the National Book Award, and New York University's journalism department named "Praying for Sheetrock" one of the top one hundred works of journalism in the twentieth century. She has written for "The New Yorker," "The Washington Post," "The New York Times Magazine," "Atlantic Monthly," "Good Housekeeping," "Newsweek," "Life," "Reader's Digest," "Redbook," and "Salon," among others. She and her husband, Don Samuel, have nine children and live in Atlanta.
Loading...
or
Not Currently Available for Direct Purchase