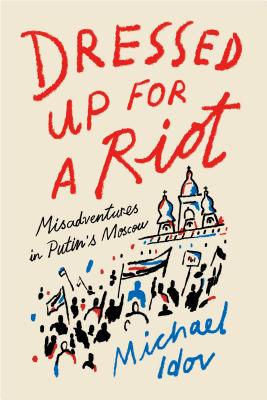 Dressed Up for a Riot

A memoir of revolution, reaction, and Russian men’s fashion

In this crackling memoir, the journalist and novelist Michael Idov recounts the tempestuous years he spent living alongside—and closely observing—the media and cultural elite of Putin’s Russia. After accepting a surprise offer to become the editor in chief of GQ Russia, Idov and his family arrive in a Moscow still seething from a dubious election and the mass anti-Putin rallies that erupted in response. Idov is fascinated by the political turmoil but nonetheless finds himself pulled in unlikely directions. He becomes a tabloid celebrity, acts in a Russian movie with Snoop Dogg, befriends the members of Pussy Riot, punches an anti-Semitic magazine editor on the steps of the Bolshoi Theatre, sells an autobiographical sitcom pilot that is later changed into an anti-American farce, and writes Russia’s top-grossing domestic movie of 2015. Meanwhile, he becomes disillusioned with the splintering opposition to Putin and is briefly attracted to a kind of jaded Putinism lite—until Russia’s invasion of Ukraine thoroughly changes his mind.

In Dressed Up for a Riot, Idov writes openly, sensitively, and stingingly about life in Moscow and his place in a media apparatus that sometimes undermined but more often bolstered a state system defined by cynicism, corruption, and the fanning of fake news. With humor and intelligence, he offers a close-up glimpse of what a declining world power can become.


Praise For Dressed Up for a Riot: Misadventures in Putin's Moscow…

"Insightful and entertaining . . . A fascinating book that illuminates the hard reality — and absurdity — of modern-day Moscow." —Malcolm Forbes, The StarTribune

“Idov is fascinating and extremely funny and it’s a great pleasure to accompany him on his adventures in modern day Russia. But perhaps the greatest strength of this book is that he takes the occasion to explain what’s actually happening there with a depth and originality that has eluded even the best political commentators.” —Joe Weisberg, Creator / Executive Producer, The Americans

“Phenomenally funny and insightful. Idov has managed something fiendishly difficult: to use his personal experience in the glamorous vortex of Moscow high life to give a damning portrayal of a whole system. 'How to Lose Friends and Alienate People' meets Orwell.'” —Peter Pomerantsev, author of Nothing Is True and Everything Is Possible

"Insightful . . . Informative . . . Idov . . . is well-versed in the politics of hipster culture as well as the upper echelons of government" —Kirkus Reviews

"Filled in jaunty, Page Six–style with the antics of Muscovite movers and shakers, and offering an unparalleled glimpse into how Russians view themselves and their place on the world stage, Dressed Up for a Riot delivers a fascinating, funny take on Idov’s three quixotic years in modern Moscow." —Booklist

Michael Idov is a staff writer for New York magazine and a frequent contributor of Russian-language columns and criticism to major Moscow publications. Ground Up is his first novel.
Loading...
or
Not Currently Available for Direct Purchase