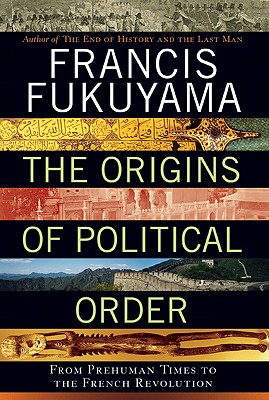 The Origins of Political Order (Hardcover)

From Prehuman Times to the French Revolution

Virtually all human societies were once organized tribally, yet over time most developed new political institutions which included a central state that could keep the peace and uniform laws that applied to all citizens. Some went on to create governments that were accountable to their constituents. We take these institutions for granted, but they are absent or are unable to perform in many of today's developing countries with often disastrous consequences for the rest of the world.

Francis Fukuyama, author of the bestselling "The End of History and the Last Man "and one of our most important political thinkers, provides a sweeping account of how today's basic political institutions developed. The first of a major two-volume work, "The Origins of Political Order" begins with politics among our primate ancestors and follows the story through the emergence of tribal societies, the growth of the first modern state in China, the beginning of the rule of law in India and the Middle East, and the development of political accountability in Europe up until the eve of the French Revolution.

Drawing on a vast body of knowledge history, evolutionary biology, archaeology, and economics Fukuyama has produced a brilliant, provocative work that offers fresh insights on the origins of democratic societies and raises essential questions about the nature of politics and its discontents.

Francis Fukuyama is the Olivier Nomellini Senior Fellow at Stanford University's Freeman Spogli Institute for International Studies. He has previously taught at the Paul H. Nitze School of Advanced International Studies of Johns Hopkins University and at the George Mason University School of Public Policy. He was a researcher at the RAND Corporation and served as the deputy director in the State Department's policy planning staff. He is the author of "The End of History and the Last Man," "Trust," and "America at the Crossroads: Democracy, Power, and the Neoconservative Legacy." He lives with his wife in California.

Praise For The Origins of Political Order: From Prehuman Times to the French Revolution…

“Ambitious and highly readable.”—The New Yorker “Political theorist Francis Fukuyama’s new book is a major accomplishment, likely to find its place among the works of seminal thinkers like Jean-Jacques Rousseau and John Locke, and modern moral philosophers and economists such as John Rawls and Amartya Sen . . .It is a perspective and a voice that can supply a thinker’s tonic for our current political maladies.”—Earl Pike, The Cleveland Plain Dealer “An intellectual triumph—bold in scope, sound in judgment, and rich in provocations; in short, a classic.”—Ian Morris, Slate  “A sweeping survey that tries to explain why human beings act as they do in the political sphere. Magisterial in its learning and admirably immodest in its ambition.”—David Gress, The Wall Street Journal

“In many respects, Fukuyama is an ideal guide for this enormous undertaking. He combines a deep expertise in political institutions with an impressive familiarity of world history, philosophy and social theory. An engaging writer, his prose crackles with sharp observations and illuminating comparisons, and the book marshals a breathtaking array of stimulating facts and provocative generalizations. Who knew, for instance, that the tsetse fly retarded the spread of Islam into sub-Saharan Africa? Simply as a compendium of fascinating minutiae and social science theory, the book offers a treasure trove to the casual student of political history. More important, Fukuyama's book can help us appreciate why so many countries fail to combine the strong institutions, rule of law and accountability that are the hallmark of peaceful and prosperous nations.” —Eric Oliver, San Francisco Chronicle

“Fukuyama’s intellectual instincts hard-wire him into the most geopolitically strategic—not to mention dangerous—corners of the world….[He] is arguably the world’s bestselling contemporary political scientist... His new book, The Origins of Political Order, which hits bookstores this week, seeks to understand how human beings transcended tribal affiliations and organized themselves into political societies... His books have taken on not only politics and philosophy, but also biotechnology and that tinderbox of an idea: human nature. ‘He’s incredibly intellectually honest,’ says Walter Russell Mead, a historian of American foreign policy. ‘He goes where his head takes him. His first duty is to the truth as he sees it.’” —Andrew Bast, Newsweek

“The history profession is today dominated by small minds studying small topics. Specialists trade in abstractions, taking refuge in tiny foxholes of arcane knowledge. It was not always this way. In the 19th century, men like Leopold von Ranke, George Macaulay Trevelyan and Frederick Jackson Turner used the past to try to understand the present. Their ideas were big, and sometimes too were their mistakes. Francis Fukuyama is at heart a Victorian. As he admits, he wants to revive a ‘lost tradition’ when historians were big thinkers. In The Origins of Political Order, his topic is the world, his starting point the chimpanzee. He charts how states evolved, in the process explaining why, despite humans’ common origin in Africa perhaps 50,000 years ago, great political diversity exists today...[It is] impressive to see such a huge and complicated topic covered in such an accessible and engaging fashion....The Origins of Political Order  tries to make sense of the complexity that has cluttered the last two decades. It is a bold book, probably too bold for the specialists who take refuge in tiny topics and fear big ideas. But Fukuyama deserves congratulation for thinking big and not worrying about making mistakes. This is a book that will be remembered, like those of Ranke, Trevelyan and Turner. Bring on volume II.” —Gerard DeGrott, The Washington Post

“The Origins of Political Order “begins in prehumen times and concludes on the eve of the American and French Revolutions. Along the way, Fukuyama mines the fields of anthropology, archaeology, biology, evolutionary psychology, economics, and, of course, political science and international relations to establish a framework for understanding the evolution of political institutions. And that’s just Volume One….At the center of the project is a fundamental question: Why do some states succeed while others collapse?” —Evan Goldstein, The Chronicle of Higher Education “The evolving tension between private and public animates this magisterial history of the state....Fukuyama writes a crystalline prose that balances engaging erudition with incisive analysis. As germane to the turmoil in Afghanistan as it is to today's congressional battles, this is that rare work of history with up-to-the-minute relevance.”—Publishers Weekly (starred, and a Top 10 Politics Pick for the Spring Preview)

“Ambitious, erudite and eloquent, this book is undeniably a major achievement by one of the leading public intellectuals of our time.” — Michael Lind, The New York Times Book Review

“Stimulating. . . With impressive erudition, the author travels across China, India, the Islamic world and different regions of Europe looking for the main components of good political order and at how and why these emerged (or failed to) in each place. . . Mr. Fukuyama is still the big-picture man who gave us The End of History, but he has an unerring eye for illuminating detail. Books on political theory are not often page-turners; this one is.” — The Economist “This exceptional book should be in every library.” —David Keymer, Library Journal “Human social behavior has an evolutionary basis. This was the thesis in Edward O. Wilson’s book Sociobiology that has caused such a stir . . . In The Origins of Political Order, Francis Fukuyama of Stanford University presents a sweeping new overview of human social structures throughout history, taking over from where Dr. Wilson’s ambitious synthesis left off. . . Previous attempts to write grand analyses of human development have tended to focus on a single causal explanation, like economics or warfare, or, as with Jared Diamond’s Guns, Germs, and Steel, on geography. Dr. Fukuyama’s is unusual in that he considers several factors, including warfare, religion, and in particular human social behaviors like favoring kin. . . 'You have to be bowled over by the extraordinary breath of approach,’ said Arthur Melzer, a political scientist at Michigan State University who invited Dr. Fukuyama to give lectures on the book. 'It's definitely a magnum opus.’” —Nicholas Wade, The New York Times “Sweeping, provocative big picture-study of humankind’s political impulses. . . Endlessly interesting — reminiscent in turns of Oswald Spengler, Stanislaw Andreski and Samuel Huntington, though less pessimistic and much better written.” —Kirkus Reviews  “Political theorist Fukuyama presents nothing less than a unified theory of state formation, a comparative study of how tribally organized societies in various parts of the world and various moments of history have transformed into societies with political systems and institutions and, in some cases, political accountability. . . This wide-ranging and frequently provocative work also carries the mantel of the great nineteenth-century socioloists.”—Brendan Driscoll, Booklist