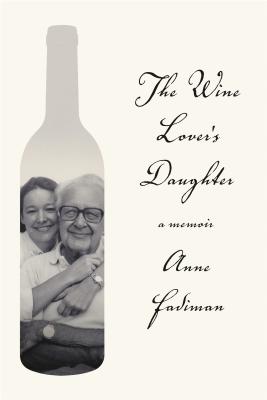 “I loved this memoir! The reader does not need to care about wine or know who Anne Fadiman is or Clifton Fadiman was. This is a book about family and how the differences between us can be one of the many things that actually draw us together. It is also about the life of a man who became a literary critic, editor, and radio host and was also the author's beloved father. Anne Fadiman is a fine writer with an ability to bring life to a variety of subjects, as has been shown in her previous essays and memoirs. One of the best memoirs to arrive on our scene in quite a while.”
— Penny McConnel (M), Norwich Bookstore, Norwich, VT
View the List

In The Wine Lover’s Daughter, Anne Fadiman examines--with all her characteristic wit and feeling--her relationship with her father, Clifton Fadiman, a renowned literary critic, editor, and radio host whose greatest love was wine.

An appreciation of wine--along with a plummy upper-crust accent, expensive suits, and an encyclopedic knowledge of Western literature--was an essential element of Clifton Fadiman’s escape from lower-middle-class Brooklyn to swanky Manhattan. But wine was not just a class-vaulting accessory; it was an object of ardent desire. The Wine Lover’s Daughter traces the arc of a man’s infatuation from the glass of cheap Graves he drank in Paris in 1927; through the Château Lafite-Rothschild 1904 he drank to celebrate his eightieth birthday, when he and the bottle were exactly the same age; to the wines that sustained him in his last years, when he was blind but still buoyed, as always, by hedonism.

Wine is the spine of this touching memoir; the life and character of Fadiman’s father, along with her relationship with him and her own less ardent relationship with wine, are the flesh. The Wine Lover’s Daughter is a poignant exploration of love, ambition, class, family, and the pleasures of the palate by one of our finest essayists.


Praise For The Wine Lover's Daughter: A Memoir…

“If Anne Fadiman’s book about her father were a wine, it would merit a ‘100’ rating, along with all the oeno-superlatives:‘smooth,’ ‘elegant,’ ‘brilliant,’ ‘rounded,’ ‘with a dazzling, heart-warming finish.’ But as it is a book and not a wine, let’s call it what it is: a stunning, original, beautifully written, clear-eyed yet tear-inducing account of a daughter’s love for her famous father; and into the bargain, the best family memoir yet to come out of the Baby Boom generation.” —Christopher Buckley

“The ostensible object of Anne Fadiman’s wonderful new book is the wine cellar of her father, the once-omnipresent critic Clifton Fadiman. But its real subjects include the insecurities of American Jews, the glories of mid-century ‘middlebrow’ culture, and, above all, the always intricate, often exasperated, and finally deeply tender relation of father and daughter.” —Adam Gopnik

“This book is as good and rich as one would hope, no small thing, given it's written by one of the best essayists of our time about her father, one of the more interesting critics of another. Uncork this book and watch one master go to work on another, a man she observed all her life with an affectionate but also a writer's eye. I was reminded reading it of what the man himself once wrote about tasting a great vintage, that it was ‘to savor a droplet of the river of human history.’” —John Jeremiah Sullivan

“[Clifton] Fadiman was something of an encyclopedia himself, his mind a magpie’s nest of odd facts and glittering insights that he summoned with seeming ease as a great explainer of literature and culture to popular audiences . . . [A] fondly drawn portrait . . . As the title suggests, [Anne Fadiman’s] book is ostensibly about Clifton Fadiman’s love affair with wine, although she writes about his oenophilic odyssey as a way to write about many other things: his ideals, his affectionate if complicated relationship with her, and his lifelong struggle to transcend his origins.” —Danny Heitman, The Wall Street Journal

“A wonderfully engaging memoir . . . Consistently absorbing . . . You will be hard-pressed to stop reading . . . Anne Fadiman’s prose, like a proper gentleman’s suit, is beautifully tailored without drawing attention to itself.” —Michael Dirda, The Washington Post

“In this crisp, scintillating, amusing, and affecting memoir, Anne incisively and lovingly portrays her brilliant and vital father and brings into fresh focus the dynamic world of twentieth-century books and America’s discovery of wine.” —Donna Seaman, Booklist (starred review)

“The Wine Lover's Daughter is a standout—possibly the best memoir, and one of the best books, this reviewer has read in 2017 . . . A fascinating book with something to interest anyone; a pure reading pleasure.” —Derek Sanderson, Library Journal (starred review)

“Fadiman decants a harmonious blend of biography, wine lore, and memoir in this account of a literary daughter's relationship with her celebrated literary father . . . Reading this daughter's graceful, often melodious billet-doux to her father is not unlike imbibing several equally felicitous glasses of wine.” —Kirkus

Anne Fadiman is the author of The Wine Lover's Daughter, a memoir about her father (FSG, 2017). Her first book, The Spirit Catches You and You Fall Down (FSG, 1997), won the National Book Critics Circle Award, the Los Angeles Times Book Prize, and the Salon Book Award. Fadiman has also written two essay collections, At Large and At Small and Ex Libris, and is the editor of Rereadings: Seventeen Writers Revisit Books They Love (all published by FSG). She is the Francis Writer-in-Residence at Yale.
Loading...
or
Not Currently Available for Direct Purchase