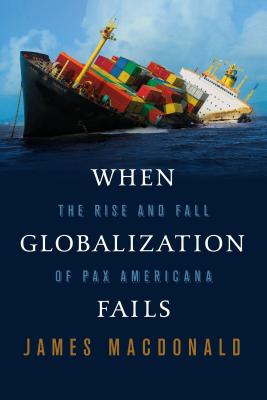 The Rise and Fall of Pax Americana

IS GLOBALIZATION AN UNINTENDED RECIPE FOR WAR?

Taking this question as its starting point, James Macdonald's When Globalization Fails offers a rich, original account of war, peace, and trade in the twentieth century—and a cautionary tale for the twenty-first.

In the late nineteenth century, liberals exulted that the spread of international commerce would usher in prosperity and peace. An era of economic interdependence, they believed, would render wars too costly to wage. But these dreams were dashed by the carnage of 1914–1918. Seeking the safety of economic self-sufficiency, nations turned first to protectionism and then to territorial expansion in the 1930s—leading again to devastating conflict. Following the Second World War, the globalists tried once more. With the communist bloc disconnected from the global economy, a new international order was created, buttressing free trade with the informal supremacy of the United States. But this benign period is coming to an end.

According to Macdonald, the global commerce in goods is a mixed blessing. It makes nations wealthier, but also more vulnerable. And while economic interdependence pushes toward cooperation, the resulting sense of economic insecurity pulls in the opposite direction—toward repeated conflict. In Macdonald's telling, the First World War's naval blockades were as important as its trenches, and the Second World War can be understood as an inevitable struggle for vital raw materials in a world that had rejected free trade. Today China's economic and military expansion is undermining the Pax Americana that had kept economic insecurities at bay, threatening to resurrect the competitive multipolar world of the early twentieth century with all its attendant dangers. Expertly blending political and economic history and enlivened by vivid quotation, When Globalization Fails recasts what we know about the past and raises vital questions about the future.


Praise For When Globalization Fails: The Rise and Fall of Pax Americana…

“Highly readable and informative . . . Macdonald's history of the past two centuries gives us an insightful view of the past and provides a helpful guide to what the future might hold for the forces of geopolitics, which, as the author elucidates, are always at work.” —John Steele Gordon, The Wall Street Journal

“Macdonald squeezes a lot into a book of some 250 pages. He traces, from the 1820s to the present, the pendulum swings between open economies at one end and closed, protected ones at the other. Because mainstream economics today--with its central tenet of the pursuit of comparative advantage by economic actors such as states--favors free trade, and because the benefits of free trade over the past 25 years seem so obvious, we see relatively little discussion of the benefits of autarky or of protectionism. Macdonald corrects this. He is by no means against trade or globalization, nor is he arguing for protection. He approaches the topic as a historian . . . simply trying to see the world as it is and to describe it with clarity . . . Macdonald has the courage to follow his own evidence and logic wherever they lead.” —Scott Malcomson, The Huffington Post

“Timely . . . Macdonald argues that the world is at a geo-political/geo-economic tipping point where the unipolar post-Cold War world, with the United State's unchallenged preeminence in global affairs, will soon be superseded by a new international order where America and China will square off against one another. Whether this new state of affairs bodes well or ill for the rest of us is the big question. To answer, Macdonald looks to the history of the 20th century for guidance.” —Robert Collison, Toronto Star

“Macdonald returns with a two-century history, noting how, continually, events and violence have shattered the notion that trade will bring peace among nations . . . He focuses on economic factors throughout: the hunger for coal, the thirst for petroleum, the passion for raw materials . . . Macdonald concludes with accounts of the rises (and increasing sways) of India and China and the enduring contention and concern in the region about access to the Strait of Malacca and the control of key Pacific islands . . . sharply focused, closely reasoned.” —Kirkus

“Contrary to the liberal dream, globalization does not lead to One World, but to disruption. Globalization reached a peak in 1913; one year later, the world was at war. In his grand sweep through history, Macdonald makes a crucial point: The global commons does not organize itself; it needs a guardian and guarantor. When Britain shed that burden, the United States took over. Macdonald argues correctly that there is nobody else-neither Russia nor China, which are revisionist, not responsible powers. Only liberal empires take care of the whole. With global conflict rising, the United States has begun to grasp Macdonald's compelling logic: no protector, no peace. So the twenty-first century need not be a repeat of the twentieth. A smart book that skewers the conventional wisdom.” —Josef Joffe, Senior Fellow at the Freeman Spogli Institute for International Studies at Stanford University and the author of The Myth of America’s Decline

“Macdonald presents a compelling thesis: Free trade and peace can prosper only under the protection of a single benign hegemon and a multipolar world is unstable. This is a book of great scope and ambition, and one of the most important to be published in recent years” —Mervyn King, former governor of the Bank of England

“James MacDonald offers a most interesting and detailed analysis of the connections among war, peace and trade in the course of the past two centuries.” —Giuseppe Ammendola, American Foreign Policy Interests

James Macdonald is a former investment banker and the author of A Free Nation Deep in Debt: The Financial Roots of Democracy (FSG, 2003). He lives in England.
Loading...
or
Not Currently Available for Direct Purchase