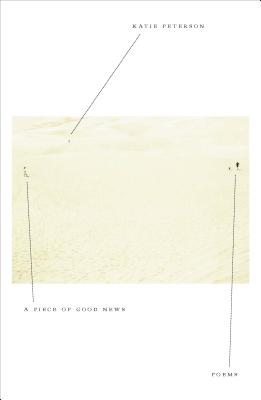 A Piece of Good News

In those days I began to see light under every
bushel basket, light nearly splitting
the sides of the bushel basket. Light came
through the rafters of the dairy where the grackles
congregated like well-taxed citizens
untransfigured even by hope. Understand I was the one
underneath the basket. I was certain I had nothing to say.
When I grew restless in the interior,
the exterior gave.

Dense, rich, and challenging, Katie Peterson’s A Piece of Good News explores interior and exterior landscapes, exposure, and shelter. Imbued with a hallucinatory poetic logic where desire, anger, and sorrow supplant intelligence and reason, these poems are powerful meditations of mourning, love, doubt, political citizenship, and happiness. Learned, wise, and witty, Peterson explodes the possibilities of the poetic voice in this remarkable and deeply felt collection.


Praise For A Piece of Good News: Poems…

“Currency, as both coin of the realm and concept of exchange, haunts and animates the poems in Katie Peterson’s probing new book, A Piece of Good News, her fourth collection. From this rich literal and figurative vein, Peterson mines the many forms of interchange—cultural, economic, familial, linguistic, political, sexual—that color our lives as individuals and as members of clans, couples, marriages, nation-states and workplaces.” —Andrew Seguin, Colorado Review

"Peterson’s prickly, playful book is filled with quasi parables (including a poem called “New Parable”) that often keep an attractive distance from their own sponsoring emotions — attractive in part because when Peterson chooses to narrow that gap, the results are striking . . . Poetry is always about what’s being said and not said, but rarely are the two so expertly intertwined." —David Orr, The New York Times Book Review

“In the fourth collection from Peterson, a typical poem moves by visceral detail rather than by association or logic, with many spectacular arrivals that overwhelm the journey . . . A poem called ‘The Sentence’ is indeed one sentence that climbs gorgeously to the top of a mountain, exposing glacier, lake, and wildflower . . . These poems burst into consciousness: a child meets John Lennon through her mother’s tears at his death, knives and scissors are the implements of love.’” —Publishers Weekly

“[A Piece of Good News], dedicated to [Peterson's] husband and created in memory of her mother, is written from the perspective of one who barely survived a devastating blow and who is now ruminating on her loss. Coping with daily life, Peterson keeps an eye on the past . . . Peterson uses words as a videographer employs details and images.” —C. Diane Scharper, Library Journal

"Placed at the first-quarter point of Peterson’s book is a masterful elegy for her mother titled “The Massachusetts Book of the Dead.” Its stanzas arranged in concise sections, the poem is foundational, a tonally divergent work that upends the playful early poems of her collection and interjects an earned seriousness into the work . . . An introspective and original collection." —Nick Ripatrazone, The Millions

Katie Peterson is the author of the poetry collections: This One Tree, Permission, and The Accounts. She lives in California and teaches at the University of California, Davis.
Loading...
or
Not Currently Available for Direct Purchase