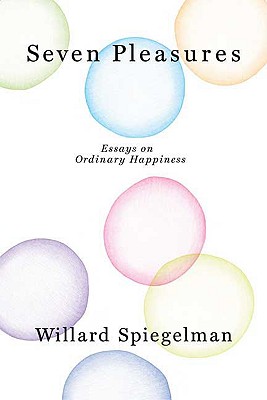 What does it mean to be happy? Americans have had an obsession with "the pursuit of happiness" ever since the Founding Fathers enshrined it along with life and liberty as our national birthright. Whether it means the accumulation of wealth or a more vaguely understood notion of self-fulfillment or self-actualization, happiness has been an inevitable, though elusive, goal.

But it is hard to separate "real" happiness from the banal self-help version that embraces mindless positive thinking. And though we have two booming "happiness industries" religion, with its promise of salvation, and psychopharmacology, with its promise of better living through chemistry each comes with its own problems and complications.

In "Seven Pleasures," Willard Spiegelman takes a look at the possibilities for achieving ordinary secular happiness without recourse to either religion or drugs. In this erudite and frequently hilarious book of essays, he discusses seven activities that lead naturally and easily to a sense of well-being. One of these dancing requires a partner, and therefore provides a lesson in civility, or good citizenship, as one of its benefits. The other six reading, walking, looking, listening, swimming, and writing are things one performs alone. "Seven Pleasures "is a marvelously engaging guide to the pursuit of happiness, and all its accompanying delights.

“Few happy people write books, but when they do, they confer the blessings of wisdom and their sanguine nature on the unhappy many. I learned so much from Seven Pleasures. I felt that Willard Spiegelman was personally walking me through all the steps necessary to dance the tango of bliss that he has so delightfully mastered.”—Edmund White, author of Hotel de Dream

“Willard Spiegelman’s Seven Pleasures mounts a gentle and persuasive argument for what years ago would have been called a more civilized life. And it reminds us what we owe ourselves: that attempt to appreciate as fully as possible that we are here, right now, wherever here may be.”—Jim Shepard, author of Like You’d Understand, Anyway

“Willard Spiegelman has written a tidy cordial of a book. Like a soigné combination of Don Giovanni and a college dean, he serves his nectar with a sassy, ironic instructiveness. He gets life right.” —Wayne Koestenbaum, author of Hotel Theory

“Willard Spiegelman is our invaluably companionable philosopher of normalcy, and we are happy to benefit here from his wisdom, wit, and well-stocked mind.”—Phillip Lopate, author of Against Joie de Vivre

“Spiegelman’s essays are wonderful advertisements for taking pleasure in the ordinary, and reminders that we’re never too old to take dancing or swimming lessons, or to learn to be lost in Venice. A lovely, companionable book.”—Margot Livesey, author of The House on Fortune Street

“Willard Spiegelman has the secret of happiness. It worked for me and it will work for you. His book is your new best friend.” —Raymond Sokolov, author of Fading Feast

“In Seven Pleasures, Willard Spiegelman reminds us that real happiness can be obtained with a radio, a library card, a public pool, and a pair of well-soled shoes. Spiegelman is simply a great essayist.” —Mark Oppenheimer, author of Thirteen and a Day

“[The] impulse to share his enjoyment has resulted in Seven Pleasures, an appropriately entertaining and provocative book. Scholar, editor and teacher, Spiegelman is writing here—as a ‘loving amateur’—about happiness and ‘the pleasurable things you can do to promote it and to increase a sense of general well-being, of what is called sanguinity.’”—Floyd Skloot, The Boston Globe

“Seven Pleasures explores a range of satisfactions to be enjoyed in the everyday life—or, to put it another way, in the no man's land between religion and pharmacology, what Mr. Spiegelman calls the ‘twin pillars of the American happiness industry.’ Individual chapters focus on his own chief pleasures: reading, walking, looking, dancing, listening, swimming and writing. One theme of his ‘book of gerunds’ is that ordinariness can yield much more pleasure than is normally assumed. All the striving for happiness in our culture may cause us to overlook the riches of the familiar and near to hand . . . The eighth pleasure the book provides is in the intelligence and grace he brings to the job.”—Wes Davis, The Wall Street Journal

“In this luminous, compelling book, Spiegelman comments on seven activities that can bring us ordinary happiness—reading, walking, looking, dancing, listening, swimming, and writing—injecting biographical elements into the universal messages he imparts. First, though, he tries to define, or at least capture the essence of, happiness. ‘Happiness,’ he observes, ‘has received less respect and less serious attention than melancholy.’ He notes the American propensity to see happiness as a right and contrasts it with the gloominess of the European mindset. With the exception of dancing, every activity he writes about involves solitude. In the reading chapter, he refers to his generation as ‘the last children born before the ubiquity of television’; if watching TV’s early, fuzzy images was unpleasant, reading was fun. In the walking chapter, he flees Dallas, his hometown, for London, a city in which walking is normal, not a chore or something to be avoided (Dallas and much of modern America, apart from the older cities of the East and Midwest, are simply too big and, in the case of Dallas, too hot to walk in comfortably). Writing in a leisurely manner, Spiegelman takes time to make his points and, whatever activity he’s engaged in at the moment, to be a thoughtful, genial companion.”—June Sawyers, Booklist (starred review)

“Some books are easy companions, and this essay collection, in which Spiegelman speaks affectionately of them, can join their ranks.”—Publishers Weekly

Willard Spiegelman is the Hughes Professor of English at Southern Methodist University and has been editor of the "Southwest Review" since 1984. He lives in Dallas, Texas.
Loading...
or support indie stores by buying on
(This book is on backorder)