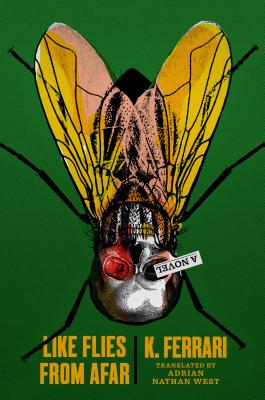 "This novel should come not with blurbs but with a hazardous-material warning: There's bone and gristle here, be ready for that taste in your mouth you can't spit out. First words to last, it's strong stuff." —James Sallis, author of Drive

The first novel to appear in English by the "subway janitor by night, novelist by day," who began his writing career while an undocumented immigrant in the United States, Like Flies from Afar will demonstrate why K. Ferrari is already an award-winning star of international crime fiction. A hardboiled noir thriller, a whodunit, a black comedy, and a filthy catalog of the excesses of wealth, this is a Jim Thompson novel for the globalized world.

Mr. Luis Machi is an unforgettably loathsome and hilarious Argentinian oligarch who made his fortune collaborating with the worst elements of society—parasites, pushers, and secret policemen. He has a cocaine habit, a collection of three hundred ties, ten million dollars in the bank, and a bloody corpse in the trunk of his BMW . . . but as far as the body goes, he's completely innocent. He has no idea who the victim could be, or who among his many, many enemies might be trying to frame him for murder, and he doesn't have much time to find out . . .

The profane and uproarious Like Flies from Afar follows Machi through twenty-four hours of his eventful life—one full day in which to solve this mystery, or at least to make sure he isn't the one to take the fall.

"Heavy on action and dark humor . . . Like Flies From Afar is for those who like their noir fast, short and nasty." —David Gordon, The New York Times Book Review

"An existential mystery, in which corruption emerges from the inside and the most pressing dangers are those we bring upon ourselves . . . Even as we shudder at the violence, we cannot help but appreciate the ironies . . . What happens when your world blows up, when everything you thought you could count on is revealed to be a reverie?" —David Ulin, The Los Angeles Times

"Argentinian author Ferrari, who works as a janitor at a Buenos Aires metro station, makes his English-language debut with an enthralling hard-boiled thriller centering on 24 hours in the life of Argentinian oligarch Luis Machi . . . Those looking for a finely honed, pitch-black crime novel will be rewarded. With any luck, the author will soon be able to give up his day job." —Publishers Weekly (starred review)

"Adrian Nathan West’s translation captures the grit and the poetry of this existential novel, a hard-hitting neo-noir parable whose dark humor delights as it strikes at the corrupt heart of business as usual in Argentina . . . The resolution of the mystery, a clarification of the whodunnit, is not meant to offer satisfaction. There’s no justice in this tale, just the ceaseless motion of possibilities — and more specters." —Lucas Spiro, The Arts Fuse

"Like Flies from Afar is one of those rare pulp gems that grabs readers by the throat and doesn't let go until the last page . . . This is a profane, funny, and brutal novel that moves forward at breakneck speed . . . A superb read that should be read by all fans of crime fiction. It's also a book that hopefully opens the door to Ferrari in the US. Put him on your radar." —Gabino Iglesias, The Criminal Element

"This amazing mix of crime novel and detective story—think Jim Thompson—is even more of a nightmare—think Kafka—stunning in its power and originality." —David Keymer, Library Journal (starred review)

"A darker shade of absurdist noir featuring an Argentine businessman, as contemptible as he is successful, who finds his life inexplicably falling apart . . . a madcap mixture of Kafka, Bukowski, and Jim Thompson." —Kirkus Reviews

"Ferrari’s English-language debut offers sharp social commentary, pitch-black humor, and a twist on the classic frame-up; his unsympathetic and cluelessly entitled narrator leaves readers with little choice but to align with a killer who leaves bodies in trunks." —Christine Tran, Booklist

"Not only is Like Flies from Afar a tough, perfectly constructed novel, it was written with the understanding that the noir is the new protest novel of the twenty-first century." —Paco Ignacio Taibo II, author of Four Hands

"K. Ferrari is one of the most important voices in the contemporary Argentine crime novel. His unique tone creates characters that are unforgettable—realistic and poetic all at once. Like Flies from Afar is yet another example of his literary mastery." —Claudia Piñeiro, author of Betty Boo and A Crack in the Wall

K. Ferrari was born in Buenos Aires in 1972. He is the author of more than five novels, including Like Flies from Afar, collections of short fiction, and a book of nonfiction. Ferrari works as a janitor for the Buenos Aires metro at the Pasteur-Amia station on line B. In the 1990s, he was deported from the United States, where he and his wife were trying to find work.
Loading...
or
Not Currently Available for Direct Purchase