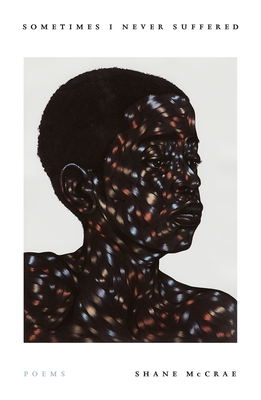 Spanning religious, historical, and political themes, a new collection from the award-winning poet

In Sometimes I Never Suffered, his seventh collection of poems, Shane McCrae remains “a shrewd composer of American stories” (Dan Chiasson, The New Yorker). Here, an angel, hastily thrown together by his fellow residents of Heaven, plummets to Earth in his first moments of consciousness. Jim Limber, the adopted mixed-race son of Jefferson Davis, wanders through the afterlife, reckoning with the nuances of America’s racial history, as well as his own.

Sometimes I Never Suffered is a search for purpose and atonement, freedom and forgiveness, imagining eternity not as an escape from the past or present, but as a reverberating record and as the culmination of time’s manifold potential to mend.

"The stunning fifth book from McCrae (The Gilded Auction Block) is steeped in the truths of witness and imagination . . . These poems see the white world as it chooses not to be seen, and illuminate the contradictions, disappointments, and loneliness that comes with paying true witness . . . This newest collection continues McCrae’s powerful examination into race, forgiveness, and meaning in America, making it an essential contribution to contemporary poetry." —Publishers Weekly (Starred Review)

"In McCrae’s hands, poetry is reclamation. It is also transport: writing a way out and through." —Kate Kellaway, The Guardian

"Racial injustice, economic inequality, simple human cruelty — McCrae addresses all of these subjects, these facts of the world, head-on — while, like Dante, transposing the literal into the otherworldly . . . McCrae’s capacity for praise may be his most remarkable poetic ability. Rather than yield to the pain, suffering, and injustice that make up much of its world, Sometimes I Never Suffered strains toward a vision of joy." —Will Brewbaker, Los Angeles Review of Books

Shane McCrae is the author of In the Language of My Captor, which was a finalist for the National Book Award, the Los Angeles Times Book Prize, and the William Carlos Williams Award; The Animal Too Big to Kill, winner of the 2014 Lexi Rudnitsky / Editor’s Choice Award; Forgiveness Forgiveness; Blood; and Mule. He is the recipient of a Whiting Writers’ Award and a National Endowment for the Arts Fellowship. He teaches at Columbia University and lives in New York City.
Loading...
or support indie stores by buying on