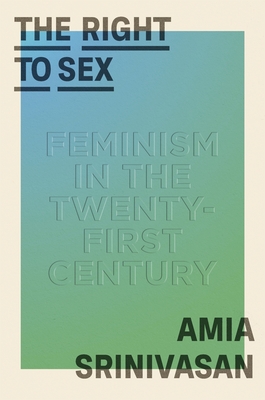 The Right to Sex

Feminism in the Twenty-First Century

“Laser-cut writing and a stunning intellect. If only every writer made this much beautiful sense.”
—Lisa Taddeo, author of Three Women

“Amia Srinivasan is an unparalleled and extraordinary writer—no one X-rays an argument, a desire, a contradiction, a defense mechanism quite like her. In stripping the new politics of sex and power down to its fundamental and sometimes clashing principles, The Right to Sex is a bracing revivification of a crucial lineage in feminist writing: Srinivasan is daring, compassionate, and in relentless search of a new frame.”
—Jia Tolentino, author of Trick Mirror: Reflections on Self Delusion

Thrilling, sharp, and deeply humane, philosopher Amia Srinivasan's The Right to Sex: Feminism in the Twenty-First Century upends the way we discuss—or avoid discussing—the problems and politics of sex.

How should we think about sex? It is a thing we have and also a thing we do; a supposedly private act laden with public meaning; a personal preference shaped by outside forces; a place where pleasure and ethics can pull wildly apart.

How should we talk about sex? Since #MeToo many have fixed on consent as the key framework for achieving sexual justice. Yet consent is a blunt tool. To grasp sex in all its complexity—its deep ambivalences, its relationship to gender, class, race and power—we need to move beyond yes and no, wanted and unwanted.

We do not know the future of sex—but perhaps we could imagine it. Amia Srinivasan’s stunning debut helps us do just that. She traces the meaning of sex in our world, animated by the hope of a different world. She reaches back into an older feminist tradition that was unafraid to think of sex as a political phenomenon. She discusses a range of fraught relationships—between discrimination and preference, pornography and freedom, rape and racial injustice, punishment and accountability, students and teachers, pleasure and power, capitalism and liberation.

The Right to Sex: Feminism in the Twenty-First Century is a provocation and a promise, transforming many of our most urgent political debates and asking what it might mean to be free.


Praise For The Right to Sex: Feminism in the Twenty-First Century…

“Srinivasan refuses to resort to straw men; she will lay out even the most specious argument clearly and carefully, demonstrating its emotional power, even if her ultimate intention is to dismantle it . . . For a book by a philosopher that makes a vibrant case for theory, The Right to Sex keeps returning to the reality of lived experience. “
—Jennifer Szalai, The New York Times

“[Srinivasan] shows us how to let philosophical arguments clarify debates within popular culture, and how to read popular culture as a way of wrestling with moral ­dilemmas related to sex, feminism, equality, and freedom . . . Imbued with the breath of fresher air, The Right to Sex demonstrates . . . how the feminist philosopher can emancipate our basic ethical concepts.”
—Judith Butler, New Statesman

"Each individual essay in this collection is complex, requiring an exegesis beyond what the scope of a single book review can handle, but certain moments stand out to me as impossible not to highlight . . . On any given page, Srinivasan will leave you feeling convinced she has found a way out, only to pull the rug out from under you; whenever she says “but,” one wants to duck."
—Jennifer Wilson, The New Republic

“Persuasive and daring . . . Srinivasan does not shy away from the difficult tensions that [her thesis] throws into relief.”
—Becca Rothfeld, Boston Review

“The Right to Sex is a truly stunning debut, sure to provoke, unmoor, and inspire many.”
—Audrey Clare Farley, Washington Independent Review of Books

“The emergence of a writer like Srinivasan, who asks feminists to go further, is an enormous gift to the discourse.”
—Jessica Ferri, The Los Angeles Times

“A daring feminist collection considers pornography, desire and the boundaries within student-teacher relationships . . . Compelling . . . The book effectively highlights how sexual desire—who we are and are not attracted to—is political and affected.”
—Rafia Zakaria, The Guardian (UK)

“The philosopher’s debut, The Right to Sex, deftly unpacks the politics of sexual desire, the nuances of the call to ‘believe women’, and fulfills our need for a deeper interrogation of modern feminism . . . [An] urgent call for an intersectional approach to feminism, which is the only way to build an equal society for women . . . Extraordinary.”
—Brit Dawson, Dazed

“To accompany Srinivasan on her thought-work into unpacking, questioning, considering, contextualizing, and deepening contemporary feminist issues is to be stretched into new shapes that the world needs. Srinivasan’s powerful thinking is matched by her powerful language, often striking like an electric revelation at the core of an issue. [The Right to Sex] is required reading.”
—Emily Dziuban, Booklist (starred review)

“This exceptionally well-written collection is among the most insightful works yet about sex in modern culture. It effectively merges academic analysis with lived experience in an accessible read that will interest readers from diverse professional and personal backgrounds.”
—Sarah Schroeder, Library Journal

“Revelatory . . . Srinivasan’s grasp on the arguments and movements of her forebears is spectacular. Her ability to explain complex concepts and issues simply makes the reader’s job both easy and enjoyable . . . Srinivasan is a phenomenal philosopher . . . It’s up to us to start taking the steps. My explicit recommendation, for what it’s worth, is to begin by reading this book.”
—Bri Lee, The Monthly

“Srinivasan’s true subject is the need for nuance and generosity in contemporary discourse on sex . . . [Written with] gliding rigor and sharp edges . . . She takes her opponents at their strongest, she braves ambiguity, and she holds up contradictory evidence to see if her argument still works . . . Srinavasan’s work is too interesting to be perfect. It’s superb.”
—Naoise Dolan, The Irish Times

“[Srinivasan] boldly examines the politics and ethics of sex—past, present and future—in her new work of non-fiction. The Right To Sex is a series of essays in which Srinivasan makes her way through consent, pornography, freedom, teacher and student relationships, male grievance, desire, intersectionality and more . . . Her writing will draw you in and teach you something.”
—Hannah Millington, The Independent (“5 New Books to Read This Week”)

“Amia Srinivasan reveals both the material opportunities and dead-ends of a century-long conscious trajectory towards female empowerment. The Right to Sex reminds us of the foundational complexities to Women's Liberation ideas and why we are still grappling with them. This gathering of evidence invites readers to create new knowledge.”
—Sarah Schulman, author of Let the Record Show: A Political History of ACT UP New York, 1987-1993

“From its luminous beginning words, Amia Srinivasan’s magnificent first book announces itself as a classic. Already one of our most superlative philosophers and stylish essayists, Srinivasan shows that concern for the plight of the most oppressed is never disconnected from general explorations of and movements for free lives for everyone, and the renovated social order our common future requires.”
—Samuel Moyn, author of Humane: How the United States Abandoned Peace and Reinvented War

Amia Srinivasan is the Chichele Professor of Social and Political Theory at All Souls College, Oxford, where she works on and teaches political philosophy, feminist theory and epistemology. She is a contributing editor at the London Review of Books. Her essays and criticism—on animals, incels, death, the university, technology, political anger and other topics—have also appeared in The New Yorker, The New York Review of Books, The New York Times, Harper’s, The Nation and TANK.
Loading...
or
Not Currently Available for Direct Purchase