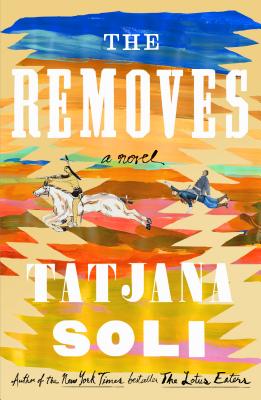 As the first wave of pioneers travel westward to settle the American frontier, two women discover their inner strength when their lives are irrevocably changed by the hardship of the wild west in The Removes, a historical novel from New York Times bestselling and award-winning author Tatjana Soli.

Spanning the years of the first great settlement of the West, The Removes tells the intertwining stories of fifteen-year-old Anne Cummins, frontierswoman Libbie Custer, and Libbie’s husband, the Civil War hero George Armstrong Custer. When Anne survives a surprise attack on her family’s homestead, she is thrust into a difficult life she never anticipated—living among the Cheyenne as both a captive and, eventually, a member of the tribe. Libbie, too, is thrown into a brutal, unexpected life when she marries Custer. They move to the territories with the U.S. Army, where Libbie is challenged daily and her worldview expanded: the pampered daughter of a small-town judge, she transforms into a daring camp follower. But when what Anne and Libbie have come to know—self-reliance, freedom, danger—is suddenly altered through tragedy and loss, they realize how indelibly shaped they are by life on the treacherous, extraordinary American plains.

With taut, suspenseful writing, Tatjana Soli tells the exhilarating stories of Libbie and Anne, who have grown like weeds into women unwilling to be restrained by the strictures governing nineteenth-century society. The Removes is a powerful, transporting novel about the addictive intensity and freedom of the American frontier.


Praise For The Removes: A Novel…

"Soli brings a new twist to the oft-told love story of Libbie and George Armstrong Custer." —The Denver Post

"Ms. Soli honours the history she uses to tell her tale by the care she takes with her storytelling, and by the way she laces through the book documents and photographs from the era. She does not shy away from violence, but nor does she revel in it . . . the reader’s imagination has been well-schooled by the author’s art: the horror is more vivid for being created in the mind’s eye." —The Economist

"A narrative of the American West centered on women, a kind of remaking of the classic Western myth . . . Soli paints pictures that will stick in my head." —San Francisco Chronicle

"An epic, enthralling look at the American West in the mid-1800s, told through the eyes of General George Armstrong Custer, his wife Libbie, and Anne Cummins, a 15-year-old girl abducted by the Cheyenne in Kansas . . . With visceral, vibrant language, Soli paints a stark portrait of the violence, hardship, and struggles that characterized the American West." —Kristine Huntley, Booklist (starred review)

"Soli unleashes a thrilling novel set in the violent Wild West . . . The clash of cultures is Soli's grand theme, and here she drives home her message that the winners are no more worthy than the losers, and that "not even brotherhood was enough to safeguard people who had what others coveted." —Publishers Weekly

“The Removes is a stunning, vivid portrayal of captivity and freedom, and of wars waged on the landscapes and peoples of the American frontier. Tatjana Soli's writing is so visceral and evocative, one feels transported to that moment when history is forged. At once intimate and sweeping, unflinching and compassionate, The Removes is a magnificent read.” —Vaddey Ratner, PEN/Hemingway Finalist, author of In the Shadow of the Banyan

“Tatjana Soli’s The Removes is a rousing, thoroughly engrossing novel of the Indian Wars in the tradition of the best of western fiction. Told through the actions, suffering, and inner musings of three very different characters—the demon-ridden George A. Custer; his fervid wife, Libbie; and a persevering young woman captive of the Cheyennes—The Removes tells a tale of impeccable verisimilitude that is at once a tightly interwoven narrative and a kaleidoscopic picture of the Indian Wars of the American West. Readers will emerge with a keen appreciation of this tragic American epoch.” —Peter Cozzens, author of The Earth is Weeping:The Epic Story of the Indian Wars for the American West

“Tatjana Soli braids a beautiful and harrowing tale of Custer, his wife, and a fifteen-year-old girl held captive out on the western plains. Intimate and panoramic all at once, this is a novel of transformation and self-reliance, a book that powerfully questions what we know of women on the American frontier.” —Dominic Smith, author of The Last Painting of Sara de Vos

"The Removes is as beautiful a novel as I’ve read in some time. It tells of the nearly unimaginable brutality of western expansion through the stories of two women living in diverse captivities: Libbie, wife of philandering General Custer, and Anne, captured as a girl by the Cheyenne. Tatjana Soli’s writing is spare, lyrical, haunting, and heartbreaking, and countless images from this book will stay with me forever: the harsh majesty of the plains, the 'sheer animal joy' of horses running into battle, and the bravado of Custer’s long, meandering march to his ruin." —Elizabeth McKenzie, author of The Portable Veblen, long-listed for the National Book Award

“Tatjana Soli weaves a stark western landscape, a national tragedy, and intimate portrayals of two pioneer women into a poignant and powerful tapestry of identity and belonging that will break your heart. I absolutely loved The Removes.” —Meg Waite Clayton, Langum Prize-honored author of The Race for Paris

"Tatjana Soli’s The Removes breathes new life into a story I thought I already knew inside out—the tale of George Custer and the Battle of the Little Bighorn, a century-old icon of American history, and exhaustively covered by Evan S. Connell’s Son of the Morning Star. Any writer entering these lists must be both bold and strong, and Soli proves herself all that, finding fresh blood in the strangely vexed, compelling romance between Custer and his wife Libbie, real pathos in the plight of captives both before and after “rescue,” and surprising sympathy for the man who wanted—fatally too much—to be a hero." —Madison Smartt Bell, author of All Souls' Rising, a finalist for the National Book Award

"Soli's new novel focuses on General Custer, the frontier, and the Indian wars. This is a western, but a modern one—beautifully detailed and carefully researched, completely free of the questionable mythologies that sometimes characterize the genre. A vivid, sometimes harrowing, but always riveting read." —Karen Joy Fowler, author of We Are All Completely Beside Ourselves, winner of the PEN/Faulkner Award

1. The book begins with an epigraph by Crazy Horse that says, “A very great vision is needed and the man who has it must follow it . . .” Does anyone in the novel show great vision? How does this quote set the tone for the story to come?

4. Libbie makes a bold decision for a young woman of her time and station, marrying a military man. Do you think it was foolish? Did she come to regret it? What were the benefits of the unusual life she ended up living?

5. George Armstrong Custer was one of the youngest Civil War heroes in the nation. Do you sympathize with his difficulty adjusting to an obscure military life postwar? What do you think of his reinvention of himself as an Indian fighter?

6. Libbie is shocked by the inhumanity she glimpses during the Civil War. The Indian tribe that Anne lives with suffers inhumanity at the hands of the U.S. military. What are the parallels between the two? What are the differences?

7. Golden Buffalo tries to help his tribe by learning the ways of the white culture that is overtaking his people’s world. On page 141, he has the following realization: “He saw his people’s futility in fighting such numbers, such rapaciousness. It was as useless as killing off coyotes. More would always come.” Do you think he was wise to try to learn the ways of his enemies? Foolish? Is there any way he could have done better to help his people?

8. When Golden Buffalo’s chief asks him what kind of a man Custer is, he answers, “He is a warrior. He has the heart of an Indian.” Were you surprised by the Indians’ respect for Custer as a warrior? Did this change your perception of him?

9. On the surface, Anne’s and Libbie’s stories are totally different. How are their experiences of the frontier similar?

11. On the train trip to Dakota, Custer defends his black cook’s right to eat at the same table as him and his soldiers, although it is clear he does this more for expediency than conviction. What do you think of his character?

12. On page 253, during the Dakota blizzard, Libbie thinks that she “had entered the most terrible kind of dream, the kind that was real and was your life and you could not awake from.” In what ways is this true for all three main characters? Libbie overcomes her panic and takes charge, saving both soldiers’ lives and a horse’s life. Do you admire her actions? What would you do under such extreme conditions?

13. In what ways, large and small, does Neha affect Anne’s experience of captivity? How does their relationship change after being rescued?

14. Anne tells her aunt Lydia that she misses her children. Were you surprised by Lydia’s reaction and her advice?

15. At the time of the Battle of Little Bighorn, the death of Custer and his men was considered a national tragedy. Compare attitudes about Custer then and today. In what ways was Custer complicit with our government’s treatment of American Indians? In what ways was he a product of his time?

16. The Removes is filled with examples of human nature at its best and worst. How does the theme of good and evil play out in each character? In the story as a whole? In American history during the frontier period?