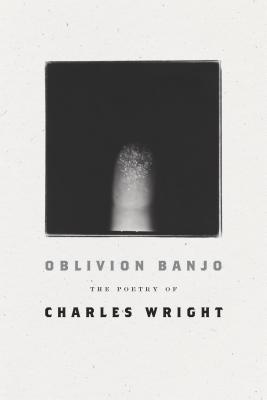 The Poetry of Charles Wright

The selected works of one of our finest American poets

The thread that dangles us
between a dark and a darker dark,
Is luminous, sure, but smooth sided.
Don’t touch it here, and don’t touch it there.
Don’t touch it, in fact, anywhere—
Let it dangle and hold us hard, let it flash and swing.
—from “Scar Tissue”

Over the course of his work—more than twenty books in total—Charles Wright has built “one of the truly distinctive bodies of poetry created in the second half of the twentieth century” (David Young, Contemporary Poets). Oblivion Banjo, a capacious new selection spanning his decades-long career, showcases the central themes of Wright’s poetry: “language, landscape, and the idea of God.” No matter the precise subject of each poem, on display here is a vast and rich interior life, a mind wrestling with the tenuous relationship between the ways we describe the world and its reality.

The recipient of almost every honor in poetry—the Pulitzer Prize, the National Book Award, and the Bollingen Prize, to name a few—and a former poet laureate of the United States, Wright is an essential voice in American letters. Oblivion Banjo is the perfect distillation of his inimitable career—for devout fans and newcomers alike.


Praise For Oblivion Banjo: The Poetry of Charles Wright…

"Wright’s poetry is driven by a trembling wonder before existence, and by a profound sense of mortality . . . Reading the abundance collected in Oblivion Banjo — 17 volumes over four decades or so, the work of a lifetime — one is struck by the care and the craftsmanship, but even more by the intense gravity of the spiritual striving." —Troy Jollimore, The New York Times Book Review

"Oblivion Banjo is a major work of American poetry by a poet who draws the reader into the inner workings of his imagination as few others do. Hundreds of years from now, if American poetry is still being read, I believe that Wright’s work will survive as a testament to the power of language to navigate and chart one complex soul." —Susan L. Moore, Commonweal Magazine

"[An] exquisite assembly of selected poems from Wright's prodigious output . . . One may lose track of self and time within Wright's radiant poems, trusting that this great poet . . . might help us hear our own language, decipher our own feelings, as if for the first time." —Raúl Niño, Booklist (Starred review)

"At moments, Wright’s work feels like an enormous, timeless front porch . . . His gregarious asceticism—asceticism over drinks, as it were—bears traces of Dante, St. Ignatius, Augustine, and the Buddha. These solemn figures make rather jaunty appearances in the work, but none of them seem to me to be the source of its charisma." —Dan Chiasson, The New Yorker

“For decades Charles Wright has been America’s backwood Buddhist, its metaphysical gardener, its lore collector, a most cosmopolitan local . . . He simply listens, taking in what the land says without speaking. As a poet he creates a similar effect, whether working in a sestet or a sonnet, or in the long, wending lines of his 1995 volume, Chickamauga, Wright sounds the same: Like a poet looking inward and outward at the same time.” —John Freeman, Literary Hub

"The brilliance of Wright’s achievement lies in how seamlessly he integrates such cultural monuments with everyday occurrences that almost anyone can relate to, like sitting in the backyard and watching clouds pass overhead, or reflecting on one’s travels, or simply remembering moments from childhood that refuse to be forgotten. Oblivion Banjo reveals the evolution and expansion of a singular voice, a singular vision, through the stages of a closely observed and considered life." —Jesse Graves, Chapter 16

"What draws me to Wright’s poems is more than that shock of recognition. In their richness, their ebullience, and the consistency of their preoccupations over time, these poems speak with an unmistakable, singular accent . . . to read through Oblivion Banjo is less to follow any arc of poetic development or change than it is to get a sense of the continuity of the observer’s presence in the face of the ongoingness of the world." —Lindsay Turner, Los Angeles Review of Books

Charles Wright is the United States Poet Laureate. His poetry collections include Country Music, Black Zodiac, Chickamauga, Bye-and-Bye: Selected Later Poems, Sestets, and Caribou. He is a winner of the Pulitzer Prize, the National Book Critics Circle Award, the National Book Award, the Griffin Poetry Prize, and the 2013 Bollingen Prize for American Poetry. Born in Pickwick Dam, Tennessee in 1935, he currently lives in Charlottesville, Virginia.
Loading...
or support indie stores by buying on
(This book is on backorder)