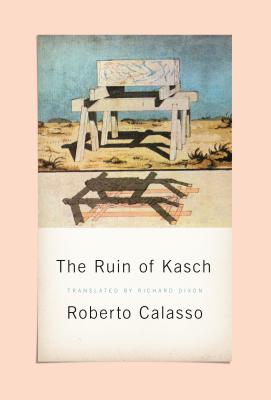 The Ruin of Kasch (Paperback)

The Ruin of Kasch takes up two subjects—“the first is Talleyrand, and the second is everything else,” wrote Italo Calvino when the book first appeared in 1983. Hailed as one of those rare books that persuade us to see our entire civilization in a new light, its guide is the French statesman Charles-Maurice de Talleyrand, who knew the secrets of the ancien régime and all that came after, and was able to adapt the notion of “legitimacy” to the modern age. Roberto Calasso follows him through a vast gallery of scenes set immediately before and after the French Revolution, making occasional forays backward and forward in time, from Vedic India to the porticoes of the Palais-Royal and to the killing fields of Pol Pot, with appearances by Goethe and Marie Antoinette, Napoleon and Marx, Walter Benjamin and Chateaubriand. At the center stands the story of the ruin of Kasch, a legendary kingdom based on the ritual killing of the king and emblematic of the ruin of ancient and modern regimes.

Offered here in a new translation by Richard Dixon, The Ruin of Kasch is, as John Banville wrote, “a great fat jewel-box of a book, gleaming with obscure treasures.”

Roberto Calasso, publisher of Adelphi in Milan, is the author of many books, among them The Ruin of Kasch, The Marriage of Cadmus and Harmony, Ka, K., and Tiepolo Pink.
or support indie stores by buying on
Copyright © 2020 American Booksellers Association