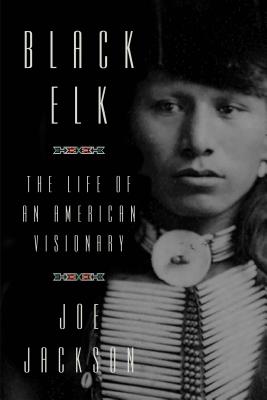 The Life of an American Visionary

Black Elk, the Native American holy man, is known to millions of readers around the world from his 1932 testimonial Black Elk Speaks. Adapted by the poet John G. Neihardt from a series of interviews with Black Elk and other elders at the Pine Ridge Reservation in South Dakota, Black Elk Speaks is one of the most widely read and admired works of American Indian literature. Cryptic and deeply personal, it has been read as a spiritual guide, a philosophical manifesto, and a text to be deconstructed—while the historical Black Elk has faded from view.

In this sweeping book, Joe Jackson provides the definitive biographical account of a figure whose dramatic life converged with some of the most momentous events in the history of the American West. Born in an era of rising violence between the Sioux, white settlers, and U.S. government troops, Black Elk killed his first man at the Little Bighorn, witnessed the death of his second cousin Crazy Horse, and traveled to Europe with Buffalo Bill’s Wild West show. Upon his return, he was swept up in the traditionalist Ghost Dance movement and shaken by the Massacre at Wounded Knee. But Black Elk was not a warrior, instead accepting the path of a healer and holy man, motivated by a powerful prophetic vision that he struggled to understand. Although Black Elk embraced Catholicism in his later years, he continued to practice the old ways clandestinely and never refrained from seeking meaning in the visions that both haunted and inspired him.

In Black Elk, Jackson has crafted a true American epic, restoring to its subject the richness of his times and gorgeously portraying a life of heroism and tragedy, adaptation and endurance, in an era of permanent crisis on the Great Plains.


Praise For Black Elk: The Life of an American Visionary…

"A comprehensive new biography of the fabled Sioux medicine man . . . [It] rattled me . . . [Black Elk's] fate was to survive a rolling catastrophe with eyes wide open, his luck also his curse." —Walter Kirn, Harper's Magazine

"Joe Jackson has expertly taken Black Elk’s life—as narrated by himself in the transcripts of his interviews with Neihardt—and woven that together with other records and histories of him and his times. The result is that Jackson has firmly situated Black Elk in the context of Indian struggles on the plains from 1850 through 1950. He uses Black Elk to bring home the radical changes that confronted most Indians during this time and, in doing so, creates a deeply felt and personal story of loss and change on the plains . . . the long set piece concerning the Battle of the Little Bighorn is among the very best I’ve ever read." —David Treuer, The Washington Post

"Remarkably thorough . . . Jackson’s deep research shows on every page, and his narrative skill makes this long biography a gripping, even thrilling read . . . In this book, he helps bring back a crucial American voice." —Kate Tuttle, The Boston Globe

"One of the most moving books I’ve ever taken in . . . A truly haunting book that I can’t recommend enough." —Joe Rogan

"Black Elk stands out for its comprehensiveness, wide-ranging historical context, and the author's deftly apposite quotation from contemporary sources . . . In addition to seating Black Elk in his time and in the events he witnessed, Jackson gives a genuine sense of the inner man, the conflict in his soul between his Indian heritage and identity and his clear-sighted, hardnosed understanding of the compromises and capitulations necessary for his and the Lakota's survival . . . Drawing on immense research, Joe Jackson has given us the story of a man and a people whose land, way of life, and culture were the target of a concentrated project of extermination by the United States Government." —Katherine A. Powers, Critical Mass, the blog of the National Book Critics Circle Board of Directors

"Remarkably researched and beautifully told . . . Jackson gives us a modern man working his way through the obstacles of the 20th century . . . his research has rewards, shifting in subtle ways the stories we thought we knew." —Ann Fabian, The National Book Review

"An astonishingly rich saga . . . Jackson's biography works to represent 'the flesh-and-blood wicasa wakan' (holy man) . . . We see Black Elk balancing tradition and modernity, with fleeting but vivid scenes of him on a ferris wheel and in a movie house. We hear of struggles within subsequent generations over his legacy and Lakota identity more generally." —Christine Bold, The Times Literary Supplement

"With access to family members of Lakota spiritual leader Black Elk, investigative journalist-historian Joe Jackson's talents as a writer, interviewer and historian are all on full-display in Black Elk, the most evocative, empathetic and comprehensive biography ever written about the Sioux holy man." —True West magazine, "The Best of the West"

"Joe Jackson’s important biography of the visionary Black Elk is much more than the story of one man’s life. It is a sweeping, comprehensive, elegantly written history of white and Indian relations; bloody, deadly battles; and the steady, deliberate destruction by the U.S. government of the native culture, language, traditions and way of life . . . Black Elk is a crucial book. It is a rich, engrossing read that will educate, surprise and infuriate." —Laurie Hertzel, The Star Tribune (Minneapolis)

"An exhaustively researched and meticulously detailed biography of Black Elk . . . Drawing on new material culled from interviews with members of Black Elk’s family, Jackson presents the Native American mystic’s life as a story rather than as a dry historical record, offering vivid accounts of historical events at which Black Elk was present . . . Jackson’s account of the great medicine man’s life, legacy, and spiritual journey is especially timely." —Spirituality and Health magazine

"Joe Jackson argues convincingly that Black Elk's life offers rare, substantial evidence of accurate Native American history as opposed to popular mythology and deserves ongoing attention as such . . . It's a colorful story, too . . . Black Elk displays a Gump-like tendency to rub shoulders with the famous, most notably when he joins Buffalo Bill's Wild West Show and finds himself in England performing for Queen Victoria." —Jeff Guinn, The Dallas Morning News

"[A] stirring, wide-ranging biography of the Sioux elder whose testimonials underlay ‘one of the twentieth century’s most important documents on Native American culture’ . . . Jackson surveys a broad swath of world history to place the Lakota spiritual leader in that terribly eventful context, and he does excellent work in doing so . . . [Black Elk is] of much literary and historical merit and a fine addition to the shelves of anyone interested in this part of America’s unhappy past." —Kirkus Reviews (starred review)

"Jackson's enlightening account of this influential Sioux leader, whose life encompassed many landmark events of the tumultuous years of U.S. western expansion, leaves the reader in awe of Black Elk's struggle to help his people preserve their culture as their traditions, religion, and education were under constant and brutal attack." —Deborah Donovan, Booklist (starred review)

"Jackson panoramically renders a narrative as majestic as the American West in this fine account of the life of Black Elk, an Oglala Lakota holy man. With compassion and clarity, Jackson portrays Black Elk as a man haunted by his inability to make sense of the 'Great Vision' that came to him as a child . . . He brilliantly frames it with an incisive discussion of the creation of John Neihardt’s 1932 as-told-to-book, Black Elk Speaks. Jackson digs into Native American culture and what it meant for Black Elk to be a holy man, especially in light of his 1904 conversion to Catholicism. He has produced a major contribution to Native American history." —Publishers Weekly

"Now readers can rediscover the real Black Elk and the wise, haunted book that bears his name. Jackson’s biography . . . brings long-lost events into sharp focus, both before and after the birth of what Jackson calls ‘one of the twentieth century’s most important documents on Native American culture’ . . . A timely addition to a rich and troubled history." —Gregory McNamee, Kirkus Reviews "Interviews and Profiles"

"Sweeping in scope . . . Joe Jackson does a magnificent job of relating, explaining and commenting on [Black Elk’s] life in what is by far the most comprehensive biography of its subject to date. Jackson portrays Native Americans with a clear-eyed sympathy that avoids sentimentality, bringing historical figures such as Crazy Horse, Red Cloud and Sitting Bull to life and providing fascinating insights into Indian life, culture and, most notably, religion." —Timothy J. Lockhart, The Virginian-Pilot

"A masterpiece of American biographical reconstruction . . . Black Elk is an unapologetically sympathetic biography, for all its wide-ranging source-work. But even sinners need some sympathy, especially when it’s as smart as the sympathy offered here." —Steve Donoghue, Open Letters Monthly

"Thorough and engrossing . . . Jackson’s storytelling is nuanced and exciting, and readers will gain a deeper understanding of Black Elk’s life and the mark he left on history." —Elizabeth Rowe, Bookish

"Joe Jackson has penned an extraordinary history of Lakota warfare with the United States wrapped around a thorough biography of the legendary Black Elk. Outstanding." —Robert M. Utley, author of The Lance and the Shield: The Life and Times of Sitting Bull

"In Black Elk, Joe Jackson paints a vivid portrait of a figure that has often been shrouded in shadows. This extraordinary book will transform the way readers think about the history of the United States and its indigenous peoples." —Ari Kelman, author of A Misplaced Massacre: Struggling Over the Memory of Sand Creek, winner of the Bancroft Prize

Joe Jackson is the author of several books. The Thief at the End of the World: Rubber, Power, and the Seeds of Empire, was named one of Time magazine’s Top Ten Nonfiction Books of 2008.
Loading...
or support indie stores by buying on
(This book is on backorder)