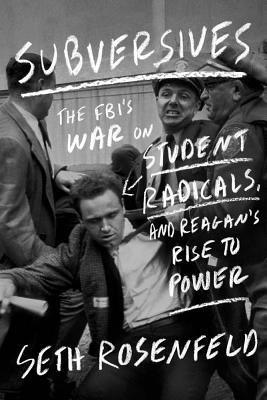 The FBI's War on Student Radicals, and Reagan's Rise to Power

Subversives traces the FBI's secret involvement with three iconic figures at Berkeley during the 1960s: the ambitious neophyte politician Ronald Reagan, the fierce but fragile radical Mario Savio, and the liberal university president Clark Kerr. Through these converging narratives, the award-winning investigative reporter Seth Rosenfeld tells a dramatic and disturbing story of FBI surveillance, illegal break-ins, infiltration, planted news stories, poison-pen letters, and secret detention lists. He reveals how the FBI's covert operations led by Reagan's friend J. Edgar Hoover helped ignite an era of protest, undermine the Democrats, and benefit Reagan personally and politically. At the same time, he vividly evokes the life of Berkeley in the early sixties and shows how the university community, a site of the forward-looking idealism of the period, became a battleground in an epic struggle between the government and free citizens.

The FBI spent more than $1 million trying to block the release of the secret files on which Subversives is based, but Rosenfeld compelled the bureau to release more than 250,000 pages, providing an extraordinary view of what the government was up to during a turning point in our nation's history.
Part history, part biography, and part police procedural, Subversives reads like a true-crime mystery as it provides a fresh look at the legacy of the sixties, sheds new light on one of America's most popular presidents, and tells a cautionary tale about the dangers of secrecy and unchecked power.


Praise For Subversives: The FBI's War on Student Radicals, and Reagan's Rise to Power…

“[An] electrifying examination of a newly declassified treasure trove of documents detailing our government’s campaign of surveillance of the Berkeley campus during the ’60s.” —Matt Taibbi, The New York Times Book Review

“Armed with a panoply of interviews, court rulings, and freshly acquired F.B.I. document, Rosenfeld shows how J. Edgar Hoover unlawfully distributed confidential intelligence to undermine the nineteen-sixties protest movement in Berkeley, while brightening the political stars of friendly informants like Ronald Reagan. Rosenfeld’s history, at once encyclopedic and compelling, follows a number of interwoven threads.” —The New Yorker, Briefly Noted

“In case you’ve forgotten or are too young to know, the 1960s were the template for today’s political divisiveness. In Subversives, Seth Rosenfeld chronicles how the abyss formed. His book is crucial history. It’s also a warning . . . Profound thanks to Seth Rosenfeld for outing the truth and speaking truth to power.” —Carlo Wolff, The Christian Science Monitor

“Several books have dealt directly or tangentially with the Berkeley student revolt, but Seth Rosenfeld’s Subversives presents a new and encompassing perspective, including a revisionist view of Ronald Reagan and a detailed picture of FBI corruption. The details of the story did not come easily. It took Rosenfeld, a former reporter for The Chronicle and the Examiner, 25 years and five Freedom of Information Act lawsuits to finally get all the material he requested from the FBI. The bureau fought him every inch of the way, spending more than $1 million of taxpayers’ money in an effort to withhold public records, until it finally had no choice . . . A well-paced and wide-ranging narrative . . . A deftly woven account.” —The San Francisco Chronicle

“Seth Rosenfeld fought the law and the people won; there can be little doubt of that . . . Subversives deepens our understanding of the political underpinnings of this period with the aid of many new details . . . Subversives will automatically become an essential reference for students of sixties unrest, of the career of Ronald Reagan, and of the FBI’s long history of illegal shenanigans against American citizens.” —Barnes and Noble Review


“Stunning revelations.” —NPR, “On the Media”

“Subversives is the story the FBI didn’t want told.” —Guernica

“Subversives is more than a documentary history—it has the insight that comes only with relentless reporting. This book is the classic history of our most powerful police agency and one of the most influential political figures of our time secretly joining forces.” —Lowell Bergman,  Investigative journalist for The New York Times and Frontline

“[A] galvanizing account of the student radical movement in the 1960s . . . This book is the result of 30 years of investigation, including Rosenfeld’s landmark Freedom of Information fight, which resulted in the FBI being forced to release more than 250,000 pages of classified documents (Rosenfeld’s appendix detailing his struggle is gripping in itself). Besides FBI files, Rosenfeld relied on court records, news accounts, and hundreds of interviews. Clearly, he has the goods, and fortunately he also has the writing skills to deliver a scathing, convincingly detailed, and evocative indictment of the tactics of the FBI and of Ronald Reagan during his rise to power against the backdrop of Berkeley in the sixties.” —Connie Fletcher, Booklist (starred review)

“Masterfully researched . . . A potent reminder of the explosiveness of 1960s politics and how far elements of the government were (and perhaps still are) willing to go to undermine civil liberties.” —Kirkus Reviews (starred review)

“All students of the sixties are indebted to Seth Rosenfeld for his years of persistent work prying documents out of the FBI. Freedom-loving Americans ought to be indebted to him for showing the lengths to which America’s political police went, and how intensely they colluded with Ronald Reagan, to encroach upon liberty.” —Todd Gitlin, author of The Sixties and Occupy Nation

Seth Rosenfeld was for many years an investigative reporter for the San Francisco Chronicle, where his article about the free speech movement won seven national awards. He lives in San Francisco.
Loading...
or
Not Currently Available for Direct Purchase