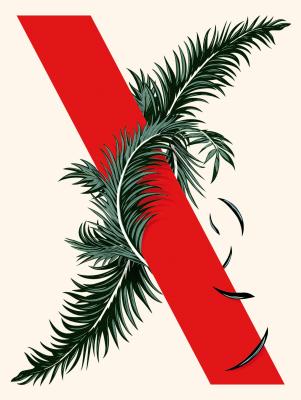 A single-volume hardcover edition that brings together the three volumes of the Southern Reach Trilogy, which were originally published as paperback originals in February, May, and September 2014.

Annihilation is the first volume in Jeff VanderMeer's Southern Reach trilogy, Authority is the second, and Acceptance is the third.
Area X-a remote and lush terrain-has been cut off from the rest of the continent for decades. Nature has reclaimed the last vestiges of human civilization. The first expedition returned with reports of a pristine, Edenic landscape; all the members of the second expedition committed suicide; the third expedition died in a hail of gunfire as its members turned on one another; the members of the eleventh expedition returned as shadows of their former selves, and within months of their return, all had died of aggressive cancer.
This is the twelfth expedition.
Their group is made up of four women: an anthropologist; a surveyor; a psychologist, the de facto leader; and our narrator, a biologist. Their mission is to map the terrain and collect specimens; to record all their observations, scientific and otherwise, of their surroundings and of one another; and, above all, to avoid being contaminated by Area X itself.
They arrive expecting the unexpected, and Area X delivers-they discover a massive topographic anomaly and life forms that surpass understanding-but it's the surprises that came across the border with them, and the secrets the expedition members are keeping from one another, that change everything.
After the disastrous twelfth expedition chronicled in Annihilation, the Southern Reach-the secret agency that monitors these expeditions-is in disarray. In Authority, John Rodriguez, aka "Control," is the team's newly appointed head. From a series of interrogations, a cache of hidden notes, and hours of profoundly troubling video footage, the secrets of Area X begin to reveal themselves-and what they expose pushes Control to confront disturbing truths about both himself and the agency he's promised to serve. And the consequences will spread much further than that.
It is winter in Area X in Acceptance. A new team embarks across the border on a mission to find a member of a previous expedition who may have been left behind. As they press deeper into the unknown-navigating new terrain and new challenges-the threat to the outside world becomes more daunting. The mysteries of Area X may have been solved, but their consequences and implications are no less profound-or terrifying.

“The plot moves quickly and has all the fantastic elements you'd ever want--biological contaminants, peculiar creatures, mysterious deaths--but it's the novel's unbearable dread that lingers with me days after I've finished it.” —Justin Alvarez, The Paris Review

“Jeff VanderMeer ventures on to strange ground in this enigmatic story.” —Alex Good, The Toronto Star

“The first book in what may be a modern classic of post-apocalyptic sci-fi . . . Annihilation's story struck me hard and pulled me in fast. I haven't had a reading experience this creepy, intense, and edge-of-your-seat since H.P. Lovecraft's At the Mountains of Madness.” —Paul Schwartz, UR Chicago

“Master of the literary headtrip Jeff VanderMeeer's Annihilation is simply unlike anything you've read before. It gnaws away at your nerves with a slow-building sense of dread and impending madness.” —Marc Savlov, Kirkus

“After their high-risk expedition disintegrates, it's every scientist for herself in this wonderfully creepy blend of horror and science fiction. . . . Speculative fiction at its most transfixing.” —Kirkus Reviews (starred review)

“A gripping fantasy thriller, Annihilation is thoroughly suspenseful. In a manner similar to H. G. Wells' in The Island of Dr. Moreau (1896), VanderMeer weaves together an otherworldly tale of the supernatural and the half-human. Delightfully, this page-turner is the first in a trilogy.” —Heather Paulson, ALA Booklist (Starred Review)

“Brilliant . . . ever-more-terrifying, yet ever-more-transcendent . . . Using evocative descriptions of the biologist's outer and inner worlds, masterful psychological insight, and intellectual observations both profound and disturbing—calling Lovecraft to mind and Borges—VanderMeer unfolds a tale as satisfying as it is richly imagined.” —Publishers Weekly

“One of those books where it all comes together—the story and the prose and the ideas, all braided into a triple helix that gives rise to something vibrant and alive. Something that grows, word-by-word, into powerful, tangled vines that creep into your mind and take hold of it. Annihilation is brilliant and atmospheric, a novel that has the force of myth.” —Charles Yu, author of How to Live in a Science Fictional Universe

“The great thing about Annihilation is the strange, elusive, and paranoid world that it creates. . . I can't wait for the next one.” —Brian Evenson, author of Last Days

“It's been a long time since a book filled me with this kind of palpable, wondrous disquiet, a feeling that started on the first page and that I'm not sure I've yet shaken.” —Matt Bell, author of In the House upon the Dirt between the Lake and the Woods

“Unsettling and un-put-downable like an old-fashioned adventure story, only weirder, beautifully written and not at all old-fashioned.” —Karen Joy Fowler, BookPage

“The prose is phenomenal . . . it toyed with my imagination in ways that haven't happened since A Wrinkle in Time.” —Madison Vain, Entertainment Weekly

“Its deepest terror lies in its exploration of . . . the human heart, and the terror that can grow from the ways in which we are untrue to each other, and to ourselves.” —Jared Bland, The Globe and Mail