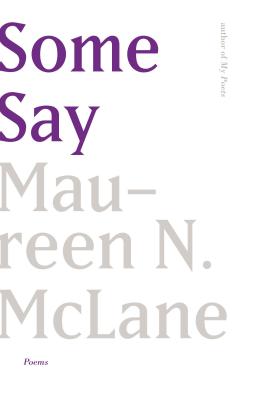 Maureen N. McLane’s Some Say revolves around a dazzling “old sun.” Here are poems on sex and death; here are poems testing the “bankrupt idea / of nature.” Some Say offers an erotics of attention; a mind roaming, registering, and intermittently blocked; a mortal poet going “nowhere fast but where / we’re all going.” From smartphones to dead gods to the beloved’s body, Some Say charts “the weather of an old day / suckerpunched” into the now.

Following on her bravura Mz N: the serial: A Poem-in-Episodes, McLane bends lyric to the torque of our moment—and of any moment under the given sun. Some Say encompasses full-barreled odes and austere lines, whiplashing discourse and minimal notations. In her fifth book of poems, McLane continues her “songs of a season” even as she responds to new vibrations—political, geological, transpersonal, trans-specific. Moving through forests and cities, up mountains, across oceans, toward a common interior, she sounds out the ecological mesh of the animate and inanimate. These are poems that make tracks in our “unmarked dark” as the poet explores “a cosmos full / of people and black holes.” From its troubled, exhilarated dawns to its scanned night sky, Some Say is both a furthering and a summation by a poet scouring and singing the world “full // as it always was / of wings / of meaning and nothing.”


Praise For Some Say: Poems…

"Breezy and inviting, but also rich and far-reaching . . . Many of the poems are so lovely that one notices their phrasing and pacing first, and then their deeper layers . . . McLane, who was a finalist for the 2014 National Book Award for “This Blue,” knows when to dazzle and when to disrupt the reader’s expectations with a risqué or cheeky observation."—Elizabeth Lund, Washington Post

"Her mix of the humorous and the cerebral is at once exuberant and rinsed with melancholy . . . Her poems are so appealing, so agreeable, and, to a reader who shares her set of references, so gettable that one might skim over the surface, start reading for the plot, for the rustle of turning the page. It is possible to be carried so far by McLane—by her knowledge, wit, generosity, and musical ear—that one is carried away . . . Her vistas are democratic but unmonumental." —Christine Smallwood, Harper's

“Set down in spare, flowing strands unhampered by punctuation, these poems achieve a surprising complexity, like unraveled Möbius strips of logic and epiphany . . . McLane's knack for encapsulating discovery and loss in so few words ("It is never not time/ to say hello/ or goodbye") is all too rare, not least because of the knowing humor and delicacy ("The fall/ suspends itself in the trees") that run through them. VERDICT Highly recommended.” —Fred Muratori, Library Journal

"Simultaneously exhausted by the conventions of nature poetry and energized by nature’s mutability, McLane (Mz N: The Serial) adopts a stance in her latest collection that could seem pessimistic were it not for her desire to keep moving." - Publishers Weekly