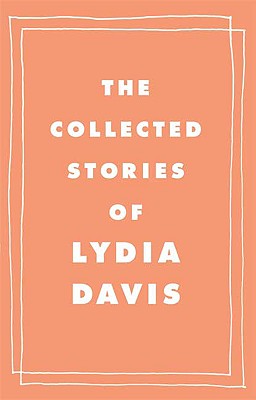 Lydia Davis is one of our most original and influential writers. She has been called "an American virtuoso of the short story form" ("Salon") and "one of the quiet giants . . . of American fiction" ("Los Angeles Times Book Review"). Now, for the first time, Davis's short stories will be collected in one volume, from the groundbreaking "Break It Down "(1986) to the 2007 National Book Award nominee "Varieties of Disturbance."
"The Collected Stories of Lydia Davis "is an event in American letters.

Lydia Davis is the author of one novel and seven story collections, the most recent of which was a finalist for the 2007 National Book Award. She is the acclaimed translator of a new edition of "Swann's Way "and is at work on a new translation of "Madame Bovary."

Praise For The Collected Stories of Lydia Davis…

“All who know [Davis’s] work probably remember their first time reading it . . . Blows the roof off of so many of our assumptions about what constitutes short fiction.” —DAVE EGGERS, McSweeney’s

“The best prose stylist in America.” —RICK MOODY  "A body of work probably unique in American writing, in its combination of lucidity, aphoristic brevity, formal originality, sly comedy, metaphysical bleakness, philosophical pressure, and human wisdom. I suspect that 'The Collected Stories of Lydia Davis' will in time be seen as one of the great, strange American literary contributions." — James Wood, The New Yorker "This welcome collection of Lydia Davis’s short fiction, which gathers stories from four previously published volumes, reveals that her obsessions have remained fairly consistent over the past 30 years: frustrated love, the entanglements of language, the writer engaged in the act of writing. But even when Davis traverses familiar territory, her masterful sentence style and peculiar perceptiveness make each work unmistakably distinct. Davis is known for her ability to pack big themes into a tight space; many stories here are less than a page, and some consist of only one sentence. The longer pieces frequently find her narrators making much out of the seemingly meager. In “The Bone,” which first appeared in the collection Break It Down, a woman describes in detached detail the night a fishbone was caught in her now ex-husband’s throat. In “The Mice” a narrator feels rejected by the mice that will not come into her kitchen, “as they come into the kitchens of [her] neighbors.”--Kimberly King Parsons, Time Out New York "Lydia Davis is one of the best writers in America, a fact that has been kept under wraps by her specialization in short fiction rather than the novel and her discomfort with the idea of one event following another in some sensible pattern, an expectation she frequently plays with, as a kitten will with your fingers. Watch out for those teeth and claws. With the publication of this big book, The Collected Stories of Lydia Davis, Davis might well receive the kind of notice she's long been due. She is the funniest writer I know; the unique pleasure of her wit resides in its being both mordant and beautifully sorrowful (her short piece "Selfish" begins, "The useful thing about being a selfish person is that when your children get hurt you don't mind so much because you yourself are all right," and you can see the regrets that birthed the sentence, even while it cracks you up). Like many great writers of short pieces she is able to convert everyday experience into a light comic drama—cooking for her husband in "Meat, My Husband" or the task of writing in "What Was Interesting"—that builds toward a piercing moment of reality. Some of Davis's stories are only one or two sentences long and many don't exceed two pages, which is good, because seeing them all together in this 700-page volume and surviving the power of the longer ones, you realize you're lucky to be getting out of the book psychically intact—or almost intact. She's that good."--Vince Passaro, O, The Oprah Magazine "What to do with all the empty white space that drifts over the 733 pages and nearly 200 fictions of The Collected Stories of Lydia Davis? Make origami, maybe. Like Don DeLillo, who drafted Underworld at the pace of one paragraph per sheet of paper—the technique, he once explained, evolved out of "a sensitivity to the actual appearance of words on a page, to letter-shapes and letter-combinations"—Lydia Davis is as much sculptor as writer. "I put that word on the page,/but he added the apostrophe," reads the entirety of one recent story, "Collaboration With Fly." Another, "My Mother's Reaction to My Travel Plans," doesn't even stretch onto a second line: "Gainsville! It's too bad your cousin is dead!'"--Zach Baron, Village Voice "No one writes a story like Lydia Davis. In the years since she began publishing her lyrical, extremely short fiction, she has quietly become one of the most impactful influences on American writers, even if they don’t know it. That’s largely because she makes economy seem so easy. You could read several of her stories into a friend’s voicemail box before you were cut off (and you should). You could fit one of her stories in this column. Some you could write on your palm."--Jonathan Messinger, Time Out Chicago "Lydia Davis is the master of a literary form largely of her own invention. Her publisher calls what she writes fiction - and her short prose pieces do have characters, settings and sometimes a plot, however minuscule - while haughtier literary types might think of it as a kind of fleshy prose poetry or designate it "flash fiction." The classically minded and fantasy fans might characterize it as updated fable. Whatever you call them, Davis' little writings are mostly in prose and often less than a page long. They are also unceasingly surprising, deeply empathic, sharply witty, often laugh-out-loud funny and really, really good."--Craig Morgan Teicher, The Cleveland Plain Dealer "This volume contains the stories from four collections: "Break It Down" (1986), "Almost No Memory" (1997), "Samuel Johnson Is Indignant" (2001) and "Varieties of Disturbance" (2007). They are shocking. Be prepared for a level of self-consciousness (remember, Beckett). Be prepared for narrators with disorienting levels of discomfort (remember, Kafka). Be prepared for moments of beauty that are sharp and merciless (remember, Proust)."--Susan Salter Reynolds, The Los Angeles Times