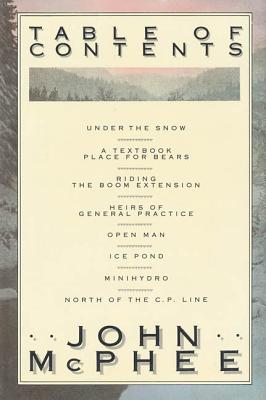 First published in book form 1985, Table of Contents is a collection of eight pieces written by John McPhee between 1981 and 1984. Geographically and thematically, they range from Alaska to New Jersey, describing, for example, the arrival of telephones in a small village near the Arctic Circle and the arrival of wild bears in considerable numbers in New Jersey, swarming in from the Poconos in search of a better life. The essays in this collection, which The New York Times called "pretty close to flawless," offer an excellent introduction to the work of one of our finest writers.


Praise For Table of Contents…

“Here is McPhee at his most ingenuous and winning, a writer for all seasons.” —George Core, The Sewanee Review