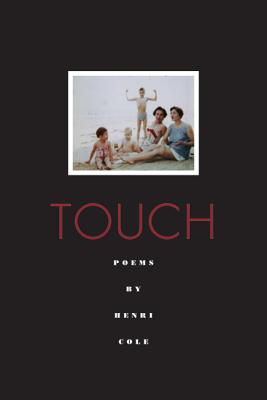 Henri Cole's last three books have shown a continuously mounting talent. In his new book, Touch, written with an almost invisible but ever-present art, he continues to render his human topics—a mother's death, a lover's addiction, war—with a startling clarity. Cole's new poems are impelled by a dark knowledge of the body—both its pleasures and its discontents—and they are written with an aesthetic asceticism in the service of truth. Alternating between innocence and violent self-condemnation, between the erotic and the elegiac, and between thought and emotion, these poems represent a kind of mid-life selving that chooses life. With his simultaneous impulses to privacy and to connection, Cole neutralizes pain with understatement, masterful cadences, precise descriptions of the external world, and a formal dexterity rarely found in contemporary American poetry.

Touch is a Publishers Weekly Best Poetry Books title for 2011.

“Cole's eighth book of poems may be his most sensitive (in the manner of a compass needle), pointing as precisely as possible to the various sources of a lifetime's fragility and emotional power. Written mostly in the pseudo-sonnets he's developed in his recent books, these poems take long, at times excruciating looks at memories that Cole's speakers must force themselves to learn from . . . It's as if Cole's extreme attention manages, somehow, to simultaneously magnify and sooth aloneness, a mystery like the one into which a pair of free canaries fly in the book's title poem: ‘Though they didn't know where they were going,/ they made their prettiest song of all.'” —Publisher's Weekly

“In a cynical age, the Wordsworthian poetry of ‘powerful feelings' may be the hardest to write successfully, but Cole has mastered the genre convincingly enough in more than two decades to garner widespread critical praise, including a 2004 Pulitzer nomination. On the heels of last year's Pierce the Skin, this new collection of plain-spoken lyrics, many of them sonnets, continues the poet's quest to connect his own physicality and emotion (‘the salt of sweat,/ the salt of tears') to the larger world (‘the salt of the sea') by ‘seeing into love, seeing into suffering.' The external prompts for this connection may be as innocuous as hens, seaweed, and bats or as devastating as the death of the poet's mother and a relationship with a drug-addicted lover . . . VERDICT Moving through ‘fraught territories/ of self and family' in so heightened a state of awareness risks solipsism and sentimentality, but Cole's meticulous craft prevents his fragile-boned structures from tipping either way, revealing an aesthetic and tonal awareness of equally impressive magnitude.” —Fred Muratori, Library Journal

“In his newest book, Henri Cole stretches the limits of his minimalist style, delves deeper into family memory, and widens the scope of the tensions he explores . . . As a minimalist, Cole comes by ingenuousness naturally . . . After a career of deftly conjuring evocative imagery, Cole has earned the right to utter plain speech . . . No mere ephemeral beauties, Cole's spare, masterfully controlled poems are a sustaining activity, a necessary function to help keep the poet, and the reader, safely positioned in the world.” —James Cihlar, Coldfront

“Henri Cole's Touch is a book of reckonings . . . Cole engages the full spirit of reckoning; psychological and emotional accounts are settled and admonishments are meted out, but always with generosity and affection . . . James Baldwin warned that there is something cruel about sentimentality because it is a lie. So in order to really honor the people we love or grieve for, the whole messiness of desire or loss must be permitted to illuminate a poem. Henri Cole's Touch exposes us to both the harshness and comfort of such light.” —Paul Otremba, The Houston Chronicle

“Touch, a new collection of poems by Henri Cole published this week by Farrar, Straus and Giroux, offered ample aesthetic rewards. Cole, a Pulitzer Prize finalist in 2003 for Middle Earth, writes in a spare, plain-spoken style, touching on such themes as his mother's death and his lover's drug addiction. Our favorite poems here are specific, precise and grounded in nature, human or otherwise. They're tender and compassionate but clear-eyed, and there's something, if we may presume to say, masculine in their stance.” —Bay Area Reporter

“Like the messianic Walt Whitman . . . Henri Cole has spent his career tallying ecstatic and multifarious encounters with physical reality. Such encounters permeate this sumptuous new collection of poems, in which Cole is to be found addressing a pig, a strand of seaweed, and even a mosquito. A characteristic tone of awed ingenuousness ("You gave me a nice bite; I hope I didn't rip your wing off, / pushing you away") is one Cole has learned from Blake and Bishop, though he also keeps an ear to the ground of contemporary speech, describing a torrential downpour as "rain on steroids." Cole is known for his hair-raising erotic intimacy . . . but these poems are emphatically universal. "How can I / defend myself against what I want?" Cole asks with voluptuous candor, and leaves it to us to infer the answer. He can't, and neither can we.” —The New Yorker

“Touch is Cole's definitive and deeply conflicted account of the death of his mother . . . Cole is unmatched in his willingness to confront and inhabit bereavement. What distinguishes Cole from his peers is not his vulnerability in the face of autobiographical detail, but his willingness to participate and collaborate in the writing of his own history . . . Touch stands as the culmination of a relationship to pain and loss that began for Cole with the publication of Middle Earth. With so many elements at work--his volta, his appropriation of speech, his occupation of bereavement and the deceased--Cole has situated himself as a poet whose evolution is as fascinating and exhilarating as the work itself, demonstrating the possibilities of poetry and revealing new directions in which to take pain and the pleasure of rendering it through language.” —Daniel Schoonebeek, The Rumpus

“Touch is . . . quiet and powerful . . . and continues in the autobiographical vein that has distinguished Cole's last four books . . . [These poems] have, in the end (with the delicacy of a compass needle), stopped at somewhere between ecstasy and dread--where, as it happens, much of living is.” —Michael Klein, Lambda Literary

“Touch [is] an intimate, new installment of Cole's biography-in-verse . . . [a] heart-rending book . . . the genius of Henri Cole's lines is in how casual they seem, even as he loads them with meaning . . . The closer one gets to Henri Cole's Touch, the more generous both poems and author seem.” —Daniel Bosch, The Arts Fuse

“Henri Cole writes poised, elegant poems as a way of containing rattling pain . . . These are poems of inveterate gentleness . . . and Touch is a book one reads with dream-like urgency . . . Though the poems seem raw and plainspoken, and positively vibrate with feeling, they are, of course, cannily wrought, and demonstrate the thing that poetry, perhaps above all other art forms, does so well: giving form and dimension to disorderly thought, causing words--random, messy, and lifeless before the poet intervenes--to spring up and deliver meaning.” —Sasha Weiss, The New Yorker's Page-Turner blog

“[Touch] is a book not of repetition but of refinement of thought. More than before, Cole displays self-awareness of his own poetic impulses . . . He shows similar awareness of his work's potent sensuality, although that aspect is more subdued here than in his previous work. ‘How can I / defend myself against what I want?' he asks a lover in ‘Carwash,' and the question's self-incrimination, bravado, and acceptance inflect the poems that follow it.” —Adam Eaglin, The Kenyon Review

Henri Cole was born in Fukuoka, Japan, in 1956. He has published over half a dozen previous collections of poetry, including Touch, Nothing to Declare, and Blackbird and Wolf; and a memoir, Orphic Paris. Among his many awards are the Jackson Poetry Prize, the Kingsley Tufts Poetry Award, the Rome Prize, the Berlin Prize, a Guggenheim Fellowship, and the Lenore Marshall Poetry Prize. He lives in Boston, where he is a fellow at the Radcliffe Institute for Advanced Study at Harvard University.
Loading...
or
Not Currently Available for Direct Purchase