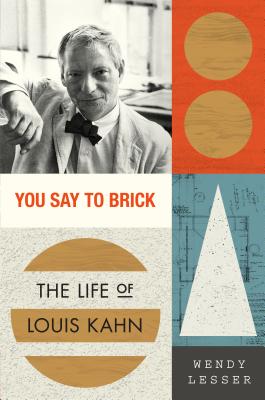 WINNER OF THE MARFIELD PRIZE AND PEN AMERICA LOS ANGELES'S 2018 LITERARY AWARD IN RESEARCH NONFICTION. FINALIST FOR THE 2018 PEN/BOGRAD WELD PRIZE FOR BIOGRAPHY

One of the Washington Post's 50 Notable Works of Nonfiction in 2017, a New York Times Notable Book of 2017, and one of Kirkus's Best Nonfiction Books of 2017

Born in Estonia 1901 and brought to America in 1906, the architect Louis Kahn grew up in poverty in Philadelphia. By the time of his mysterious death in 1974, he was widely recognized as one of the greatest architects of his era. Yet this enormous reputation was based on only a handful of masterpieces, all built during the last fifteen years of his life.

Wendy Lesser’s You Say to Brick: The Life of Louis Kahn is a major exploration of the architect’s life and work. Kahn, perhaps more than any other twentieth-century American architect, was a “public” architect. Rather than focusing on corporate commissions, he devoted himself to designing research facilities, government centers, museums, libraries, and other structures that would serve the public good. But this warm, captivating person, beloved by students and admired by colleagues, was also a secretive man hiding under a series of masks.

Kahn himself, however, is not the only complex subject that comes vividly to life in these pages. His signature achievements—like the Salk Institute in La Jolla, the National Assembly Building of Bangladesh, and the Indian Institute of Management in Ahmedabad—can at first seem as enigmatic and beguiling as the man who designed them. In attempts to describe these structures, we are often forced to speak in contradictions and paradoxes: structures that seem at once unmistakably modern and ancient; enormous built spaces that offer a sense of intimate containment; designs in which light itself seems tangible, a raw material as tactile as travertine or Kahn’s beloved concrete. This is where Lesser’s talents as one of our most original and gifted cultural critics come into play. Interspersed throughout her account of Kahn’s life and career are exhilarating “in situ” descriptions of what it feels like to move through his built structures.

Drawing on extensive original research, lengthy interviews with his children, his colleagues, and his students, and travel to the far-flung sites of his career-defining buildings, Lesser has written a landmark biography of this elusive genius, revealing the mind behind some of the twentieth century’s most celebrated architecture.


Praise For You Say to Brick: The Life of Louis Kahn…

"Wendy Lesser's You Say to Brick is easily the most complete narrative of Kahn's life and career, magnificently researched and gracefully written . . . Her account is packed with insights, of both the architectural and psychological kind . . . Kahn died far from the light. With Lesser's biography, the illumination is restored." —Inga Saffron, New York Times Book Review

"Lesser writes beautifully and engagingly . . . What Lesser adds to the Kahn narrative isn’t simply a pragmatic understanding of his personal life. She allows the women in his life to emerge as far more than mere satellites to a great male ego . . . The success of this biography lies in the author’s fundamental acceptance of the messiness of human life." —Philip Kennicott, Washington Post

"[Lesser] has an innate feel for Kahn’s architecture . . . Her biography is not the first we have of Kahn, but it is notable for its warm, engaged, literate tone and its psychological acuity." —Dwight Garner, New York Times

"[An] excellent new biography of Louis Kahn . . . Wendy Lesser has done the architect a great service with her compelling and even-handed biography, honouring [Kahn's] belief that much can be learned if one takes the time to listen to the materials at hand." —Jessica Loudis, Times Literary Supplement

"[Lesser is] too smart a writer to waste her time tilting against the windmill of celebrity architecture. Instead, she plays with the form of architectural biography to create a narrative that at once seems to accept the realities of our time and to transcend them . . . Lesser has accomplished something very important here . . . She has helped us feel the powerful emotional connection to space and form and light and materials that Kahn himself felt, and that is far more than most architects’ biographies manage to do." —Paul Goldberger, The Nation

"Fascinating . . . This remarkable, readable and humane book pairs painstaking research with poetic interpretations. No detail is too small, as long as it sheds light on one of the 20th century’s most admired, influential architects." —Claude Peck, Minneapolis Star Tribune

"[A] monumental new biography . . . Lesser is a keen observer . . . In You Say to Brick, her subtle interpretations of conversational remarks by Kahn's intimates, and especially of Kahn's written ephemera, are luminous and deep." —Thomas de Monchaux, n+1

"[You Say to Brick] offers an impressively complete profile of Kahn . . . This volume joins the 2003 film My Architect, directed by Kahn's son, Nathaniel, as an essential document of the architect's life." —Julian Rose, Bookforum

"[A] superb new biography . . . A careful historian who also has a keen sense of the big picture, [Lesser] bores deeply into Kahn’s complicated life, ultimately describing his architecture with as much sympathy and sophistication as she brings to her analysis of his relationships with colleagues, clients, and family members. . . Lesser, throughout, makes astute and sometimes surprising connections between the details of Kahn’s personal history and his architecture." —Christopher Hawthorne, Architect Magazine

"The book is superbly researched . . . Ms Lesser captures the charisma of Kahn." —The Economist

"Wendy Lesser has ingeniously organized her book . . . Her research . . . approaches the monumentality of Kahn's best buildings. Biographers who write about architects sometimes err when it comes to the treatment of the work but not Lesser." —Jack Quinan, Buffalo News

"If [You Say to Brick] inspires us to do more, whether to seek out deeper study of [Kahn's] works on our own or to see the world with wider, more curious eyes, then Lesser has done something that the best biographers can hope to do but which only a portion of them achieve. That she does so with a voice that can appeal to the uninitiated as well as the scholar makes You Say to Brick all the more impressive, and a deep source of inspiration." —Spectrum Culture

"[You Say to Brick is] a riveting account of Kahn's life . . . Lesser’s biography, at once reverential and bracingly candid, serves as a powerful epitaph to Kahn’s achievements." —Julia Klein, The Forward

"[Lesser is] a critic of unusual scope . . . [A]n intriguing speculation about the inner drives that propelled [Kahn] to brilliant design and to numerous affairs, illegitimate children, and chaotic business practices." —Harvard Magazine

"Stellar . . . Extensively researched . . . A splendid biography that penetrates the inner lives of Kahn's buildings as well as the inner life of their creator." —Kirkus Reviews (starred review)

"[A] supremely enlightening and involving chronicle of an avid and complicated creative life . . . Lesser tracks with clarity and drama each demanding phase in Kahn's evolution as an ardent and magnetic architect and teacher" —Booklist (starred review)

"Exhaustively researched and poetically written, [You Say to Brick] offers a fitting and eminently accessible tribute to an architect who so ardently sought to bring beauty to the public square." –Publishers Weekly

“Louis Kahn has long eluded serious attention. He needed careful, fierce, and passionate study to bring alive his remarkable life and work. In Wendy Lesser he has found the perfect interlocutor. This book is a triumph.”—Edmund de Waal

“Louis Kahn was in many ways the philosopher king of American architecture, and the masterful buildings he produced exert a hold on us that is even more powerful now than at his death more than four decades ago. Wendy Lesser’s You Say to Brick combines a compelling narrative of Kahn’s unusual life with a sensitive and knowing analysis of his extraordinary architecture. Few architectural biographies manage to be engaging, thought-provoking, and uplifting at the same time, but this one does.” —Paul Goldberger

“We are always intrigued, with great artists we respect, to learn how and what about their personal lives inspired their work. Wendy Lesser’s You Say to Brick succeeds in realizing Kahn’s long journey from his youth in Europe to his late recognition as one of the great architects of the twentieth century.” —Moshe Safdie

“The American architect Louis Kahn was a luminous man, full of secrets, who made some of the most beautiful buildings of the modern era. He was powerfully drawn to the romance of beginnings (in his love affairs no less than in his art), but he also understood modern concrete. In You Say To Brick: The Life of Louis Kahn, Wendy Lesser knows that she has an important but also wonderfully tricky subject on her hands. She brings to life the public art and the private man in ways that do admirable justice to both.” —Mark Stevens and Annalyn Swan

"I was very pleased to read this wonderfully written book. It took me back to the memories of my time and conversation with Lou. I must add that this book has indeed recorded and documented his life very well, and it brings the history of Kahn's work and life alive." —Balkrishna Doshi

Wendy Lesser is the founder and editor of The Threepenny Review and the author of a novel and several books of nonfiction, including Music for Silenced Voices and Why I Read, which garnered rave reviews from coast to coast. She has written for The New York Times Book Review, the London Review of Books, The Times Literary Supplement, and other publications. She received one of the first National Endowment for the Humanities Public Scholar awards to complete You Say to Brick, her award-winning biography of Louis Khan.
Loading...
or
Not Currently Available for Direct Purchase