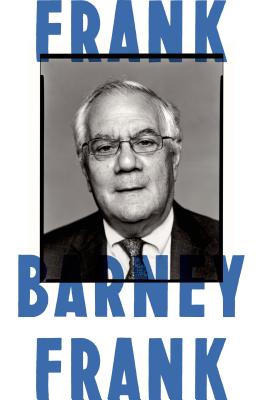 How did a disheveled, intellectually combative gay Jew with a thick accent become one of the most effective (and funniest) politicians of our time?

Growing up in Bayonne, New Jersey, the fourteen-year-old Barney Frank made two vital discoveries about himself: he was attracted to government, and to men. He resolved to make a career out of the first attraction and to keep the second a secret. Now, sixty years later, his sexual orientation is widely accepted, while his belief in government is embattled.

Frank: A Life in Politics from the Great Society to Same-Sex Marriage is one man's account of the country's transformation--and the tale of a truly momentous career. Many Americans recall Frank's lacerating wit, whether it was directed at the Clinton impeachment ("What did the president touch, and when did he touch it?") or the pro-life movement (some people believe "life begins at conception and ends at birth"). But the contours of his private and public lives are less well-known. For more than four decades, he was at the center of the struggle for personal freedom and economic fairness. From the battle over AIDS funding in the 1980s to the debates over "big government" during the Clinton years to the 2008 financial crisis, the congressman from Massachusetts played a key role. In 2010, he coauthored the most far-reaching and controversial Wall Street reform bill since the era of the Great Depression, and helped bring about the repeal of Don't Ask, Don't Tell.
In this feisty and often moving memoir, Frank candidly discusses the satisfactions, fears, and grudges that come with elected office. He recalls the emotional toll of living in the closet and how his public crusade against homophobia conflicted with his private accommodation of it. He discusses his painful quarrels with allies; his friendships with public figures, from Tip O'Neill to Sonny Bono; and how he found love with his husband, Jim Ready, becoming the first sitting member of Congress to enter a same-sex marriage. He also demonstrates how he used his rhetorical skills to expose his opponents' hypocrisies and delusions. Through it all, he expertly analyzes the gifts a successful politician must bring to the job, and how even Congress can be made to work.
Frank is the story of an extraordinary political life, an original argument for how to rebuild trust in government, and a guide to how political change really happens--composed by a master of the art.

Barney Frank represented the Fourth Congressional District of Massachusetts for nearly five decades, and chaired the House Financial Services Committee from 2007 to 2013. He is the first member of congress to enter a same-sex marriage while serving in office. He is a regular commentator on MSNBC and lives near Portland, Maine, with his husband.

Praise For Frank: A Life in Politics from the Great Society to Same-Sex Marriage…

Winner of the Randy Shilts Award for Gay Nonfiction

“I [once] said [to Frank] I was sorry I would never be able to vote for him as the first gay president of the United States. After reading this book, I am sorrier than ever.” —Garry Wills, The New York Review of Books

“A sophisticated and extended work of political analysis . . . What so plainly animates [Barney Frank]--and this book--is making his case for how politics and issue advocacy should be practiced. That is part of what makes Frank so edifying: He uses his personal and political rise . . . to argue, cogently and cleverly, for his point of view . . . Enriching for students of politics of any (or no) stripe.” —Jonathan Martin, The New York Times

“A fun book to read.” —Chuck Todd, Meet the Press

“The early 21st century's answer to Mark Twain . . . one of the most idiosyncratic, influential and entertaining people to serve [in Congress]” —Colin Woodward, The Washington Post

“An enlightening and entertaining romp through a half-century of American politics and policymaking. But what can it possibly offer as a guide to fixing government during an era of polarization, dysfunction, and public disaffection? The short answer is more than you might think . . . . [Barney Frank] brings life, passion and humor to these sober observations and demonstrates why politics and government should be and sometimes can be a noble and uplifting undertaking.” —Thomas E. Mann, Brookings Institute

“Much more entertaining than most political memoirs, Frank's story isn't just revealing; it may be the most fun you can have reading about the United States Congress.” —Kirkus (starred review)

“Filled with wonderful and insightful examples of legislative maneuvering and political intrigue . . . [Frank is] worth reading as both the story of a public figure who has lived a full and fascinating life as well as a primer about American politics from an insider who knew how to make the system work.” —Peter Dreier, The Huffington Post

“Frank deliciously charts his adventures from the closet to the center of the political stage . . . Frank is candid, and self critical on each step. He details compromises and pragmatic realities. His account of life during the Clinton years is particularly fascinating.” —Rob Watson, The Huffington Post

“A vivid and candid account of a life, both private and public, that is told in the gruff, wry and blunt voice that is literally unique in American politics--the inimitable voice of Barney Frank . . . Frank is an intimate, courageous, and revealing book about what the political landscape looks like from his unique perspective.” —Jonathan Kirsch, Jewish Journal

“Barney Frank will be remembered as one of the hardest-working, quickest-thinking, most effective--and most quotable--congressmen in our nation's history. Frank tells his story with characteristic candor, from coming out of the closet and working for LGBT rights to fighting for sensible financial reforms. Frank's belief that government can improve people's lives has given passion and energy to a remarkable career in public service.” —Elizabeth Warren, U.S. Senator for Massachusetts

“This is authentic Barney--a compelling narrative because it mixes the personal with the professional and with his one-of-a-kind sense of humor. It's also an important piece of history by a skilled legislator who has been able to get things done in Washington, D.C., that have made a real difference in all of our lives. I was privileged to work with him.” —Hank Paulson, former Secretary of the Treasury

“This detailed and accessible memoir certainly lives up to its title, as former Massachusetts Congressman Frank offers a warts-and-all portrait of his life in public service.” —Publishers Weekly (starred review)

“[Frank] is an illuminating look at behind-the-scenes politics and larger societal changes and one man's struggle with sexual politics and identity.” —Vanessa Bush, Booklist (starred review)

“You will learn so much that's new from this spectacular anecdote-riddled book--even if, like me, you've known Barney Frank for forty-nine years. Who better than the smartest, funniest man in Congress, as Barney was widely perceived to be, to make the case for government, for pragmatism, for the little guy, for equality . . . and to explain how things really work--and could be better? He was there for all of it.” —Andrew Tobias, author of The Best Little Boy in the World

“[Frank] relates in delightful candor why a man who was told he "couldn't win," ended up a national hero . . . there is no other living politician today able to compare with Barney's tireless dedication and sprightly unusual life story!” —Liz Smith

“Frank's acumen is on display in this polemical book, along with his sometimes-biting sense of humor . . . Frank tells all . . . with wit and gusto . . . [and] with energy and indignation--all part of the package with Barney Frank.” —Alan Rosenberg, Providence Journal (on audiobook edition)