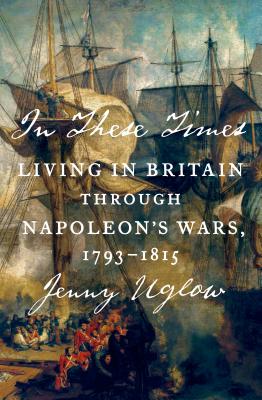 We know the thrilling, terrible stories of the battles of the Napoleonic Wars—but what of those left behind? The people on a Norfolk farm, in a Yorkshire mill, a Welsh iron foundry, an Irish village, a London bank, a Scottish mountain? The aristocrats and paupers, old and young, butchers and bakers and candlestick makers—how did the war touch their lives?

Jenny Uglow, the prizewinning author of The Lunar Men and Nature's Engraver, follows the gripping back-and-forth of the first global war but turns the news upside down, seeing how it reached the people. Illustrated by the satires of Gillray and Rowlandson and the paintings of Turner and Constable, and combining the familiar voices of Austen, Wordsworth, Scott, and Byron with others lost in the crowd, In These Times delves into the archives to tell the moving story of how people lived and loved and sang and wrote, struggling through hard times and opening new horizons that would change their country for a century.

“Monumental . . . A remarkable distillation of hundreds of letters, diary entries and other documents produced by people from varying walks of life . . . [Uglow is] a great historian.” —Karin Altenberg, The Wall Street Journal

“A fascinating account of how Britons lived through a generation of war . . . A vivid portrait of citizens who gave priority to day-to-day lives but rarely forgot they were engaged in the greatest war in history.” —Kirkus

“It is hard to think of anyone who has contributed as much to the literature of the past forty years in so many fields--as publisher, editor and writer--as Jenny Uglow.” —Peter Stothard, Times Literary Supplement

“As crowded and bustling as a Gillray drawing . . . At its impressive best, it has the dense feel of Turner's Battle of Trafalgar.” —Nicholas Shakespeare, The Daily Telegraph

“Few can match [Uglow's] skill at conjuring up a scene, or illuminating a character with a swift and glittering line of description. And so it is here . . .In These Times brims with life.” —Miranda Seymour, The Sunday Times

Jenny Uglow’s books include prizewinning biographies of Elizabeth Gaskell and William Hogarth. The Lunar Men (FSG, 2002) was described by Richard Holmes as “an extraordinarily gripping account,” while Nature’s Engraver won the National Arts Writers Award for 2007. A Gambling Man (FSG, 2009) was short-listed for the 2010 Samuel Johnson Prize for Non-Fiction. Uglow grew up in Cumbria and now lives in Canterbury, England.
Loading...
or
Not Currently Available for Direct Purchase