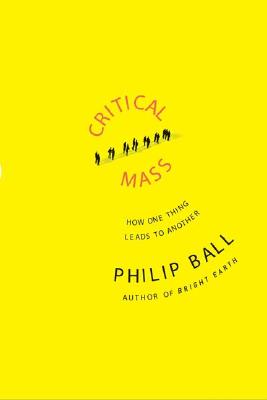 How One Thing Leads to Another

Are there any "laws of nature" that influence the ways in which humans behave and organize themselves? In the seventeenth century, tired of the civil war ravaging England, Thomas Hobbes decided that he would work out what kind of government was needed for a stable society. His approach was based not on utopian wishful thinking but rather on Galileo's mechanics to construct a theory of government from first principles. His solution is unappealing to today's society, yet Hobbes had sparked a new way of thinking about human behavior in looking for the "scientific" rules of society.

Adam Smith, Immanuel Kant, Auguste Comte, and John Stuart Mill pursued this idea from different political perspectives. Little by little, however, social and political philosophy abandoned a "scientific" approach. Today, physics is enjoying a revival in the social, political and economic sciences. Ball shows how much we can understand of human behavior when we cease to try to predict and analyze the behavior of individuals and instead look to the impact of individual decisions-whether in circumstances of cooperation or conflict-can have on our laws, institutions and customs.

Lively and compelling, Critical Mass is the first book to bring these new ideas together and to show how they fit within the broader historical context of a rational search for better ways to live.

Praise For Critical Mass: How One Thing Leads to Another…

Bright Earth: Art and the Invention of Color

"A marvelous cultural history as well as a hugely rich and beautifully written history of the materials of color." --Oliver Sacks

"Well-written...Witty...Essential both for the information it imparts and for its role in setting the stage for a widened perspective." --John Loughery, The Washington Post

"Erudite...Ball's excitement is infectious; his writing is clear and engaging, conveying the magic and logic of chemistry. "--Barbara MacAdam, Los Angeles Times

Life's Matrix: A Biography of Water

"A born teacher who will stop at nothing to help you feel, see and understand his subject."--Dennis Drabelle, The Washington Post Book World

"A tour de force of scientific exposition...A reader can learn more interesting chemistry, physics, biology, geology, and environmental science from this volume than from a collection of reference books."--Harvey Shepard, The Philadelphia Inquirer

"Like John McPhee's books on American geology, it's an extraordinarily comprehensive volume of natural science, written in a confident, dare we say, fluid style."--Susan Adams, Forbes