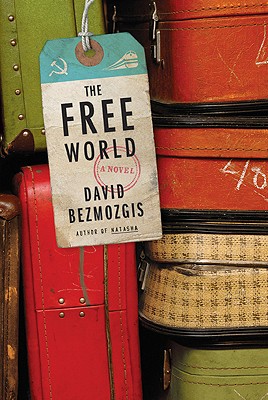 Written in precise, musical prose, The Free World is a stunning debut novel, a heartfelt multigenerational saga of great historical scope and even greater human debth. Enlarging on the themes of aspiration and exile that infused his critically acclaimed first collection, Natasha and Other Stories, The Free World establishes Bezmozgis as one of our most mature and accomplished storytellers.


Praise For The Free World…

“Self-assured, elegant, and perceptive. . . [Bezmozgis] has created an unflinchingly honest, evenhanded and multilayered retelling of the Jewish immigrant story that steadfastly refuses to sentimentalize or malign the Old World or the New. Sholem Aleichem might well feel proud. And perhaps so too might Philip Roth and Leonard Michaels.”—Adam Langer, The New York Times


“Bezmozgis overturns our cliched expectations of immigrant idealism . . . Strikingly, he never pretends that his confused, self-interested characters are admirable, virtuous or even likable, but he respects them nonetheless. His book pays tribute to their tenacity and to their sometimes accidental courage . . . Bezmozgis laces even his darkest humor with pathos. While his depictions don’t flatter his subjects, they honor them by conveying each person’s individual history, motivations and truth.”—Liesl Schillinger, The New York Times Book Review

“The linked stories of David Bezmozgis’s acclaimed debut collection, Natasha (2004), measured a young Latvian Jew’s life spent as a foreigner in a foreign land—North America—and sketched an ever widening gulf between history and tradition and the immigrant’s Western experience. His perceptive and engaging first novel, The Free World, is anchored a few years earlier than Natasha, in 1978 and records the Krasnansky family’s existence in transit—no longer in the Soviet Union but not yet at its final destination.”—Time

“David Bezmozgis’s debut story collection Natasha, met with the sort of critical reception that even grandiose adolescents are too realistic to expect . . . More recently, The New Yorker included him on the roster every young writer dreams about: its 20 under 40 list, in June 2010. If that final accolade seemed a little much last summer—six years after the release of Bezmozgis’ only book-length work—his new novel, The Free World, makes it seem prescient.”—Slate

“What makes Bezmozgis such a joy to read is his sincerity of tone, his seemingly bottomless empathy. Irony and black humor are inevitable characteristics of prose by writers from the former Soviet Union; they are ingrained in our literature, our very worldview. As young immigrant writers, our knowledge of our community benefits from both an insider’s and outsider’s perspective, but the danger of this observational stance is that potential to turn on our characters, make them comical at the expense of their humanity. Bezmozgis never falls into this trap. His loyalties lie staunchly with his creations, and the absurdities he points out are deeply funny, yet filtered through a mature wisdom.”—The Forward

“Bezmozgis’s keen sensitivity and ability to render human frailty is exquisite. In its most successful moments, The Free World not only localizes the grand drama of shifting, global ideologies but also binds the allegorical to relatable human emotions.”—Time Out New York (4 out of 5 stars)

“[The Free World’s] strength is in the language. Unlike the crisp, tidy prose of Natasha, written in the detached candor of the teenage narrator, the voices of The Free World speak a new Frankenstein tongue, its seams purposefully showing. Though written in English, the dialogue has the distinct rhythm and tone of Russian that has been translated, almost word-for-word, without an interpreter’s laborious task of adjusting for context. As a storytelling device, it’s perfect; it immerses the reader in the Krasnansky’s household and, lest he forget, reminds him that the place he has entered is very Russian—not Russians among Americans, as he may be used to, or even Russians among Italians.”—The New York Observer

“In the past decade, a handful of writers have added compelling twists to the classic immigration novel, adding new and unexpected layers to tales of newcomers in new lands. Jeffrey Eugenides, for example, wrote about a hermaphrodite immigrant in Middlesex; in Junot Diaz’s The Brief Wondrous Life of Oscar Wao, the protagonist had a fantastic imagination and used an unexpected language infused with Spanish and video game slang. Now comes David Bezmozgis’s The Free World, an immigration novel in which the characters don’t actually immigrate . . . Each person in the rambling Krasnansky clan is explored in detail and with keen insight, which Bezmozgis achieves with dazzling manipulations of point-of-view.”—Bookforum

“Polina has somewhat fecklessly left her devoted, upright husband for Alec, a smooth-talking womanizer now eyeing a teenage girl. Responsible older brother Karl has big dreams but helps the family survive by getting involved in a shady business. Family patriarch Samuil, who still mourns a brother lost in World War II, remains firmly secular even as his wife drifts toward the family’s Jewish heritage. Sounds like your typical family problems, but the Krasnanskys are Soviet Jews who have fled to the West (it’s 1978), and the miracle of this debut novel is how effectively Bezmozgis (Natasha: And Other Stories) captures both the family’s recognizable tensions and the particular difficulties of the Soviet émigré experience. Staunch Communist Samuil, for instance, contravened his convictions to emigrate and remain with his family, while Polina will never see hers again. Having opted not to go to Israel, the Krasnanskys find themselves in Rome, struggling to arrange visas to the United States or Canada. Bezmozgis fills their wait with carefully nuanced anguish and, yes, hope.VERDICT Bezmozgis proves why he was recently proclaimed one of The New Yorker’s 20 Under 40; this is mellifluous, utterly captivating writing, and you’ll live with the Krasnansky family as if it were your own. Highly recommended.” —Barbara Hoffert, Library Journal “Bezmozgis makes good on the promise of his celebrated first book, Natasha and Other Stories (2004), in his spectacular first novel. Sharply funny and fast-paced, yet splendidly saturated with intriguing psychological nuance and caustic social commentary, The Free World follows a contentious Latvian Jewish family as they join the chaotic exodus of Soviet Jews in 1978. In the brilliantly ensnaring opening scene, set in a teeming train station, we meet the very different brothers Krasnansky. Handsome and seductive Alec, scandalously married to beautiful and non-Jewish Polina, has an eye for luscious females that will prove catastrophic, while dutiful husband and father of two Karl is aggressively muscled, gruff, and fiercely pragmatic. Samuil, their father, proud of his military bearing and service, remains a loyal Socialist, disdainful of weakness and sentiment. Hoping to settle in America, the Krasnanskys end up stuck in Rome for the summer, poor, crowded into shabby rooms, and maddened by byzantine and corrupt bureaucracy. As they struggle to survive this baffling limbo, they are deluged with memories and become entangled in a casually brutal criminal underworld. Bezmozgis infuses every scene with prismatic significance, covering an astonishing swath of Jewish and Soviet history, immigrant traumas, sexual drama, and family angst. A brilliantly ironic and beautifully human novel of exile and yearning.”—Donna Seaman, Booklist

David Bezmozgis was born in Riga, Latvia, in 1973. His first book, "Natasha and Other Stories," won a regional Commonwealth Writers' Prize and was a 2004 New York Times Notable Book. He has been a Guggenheim Fellow and a Dorothy and Lewis B. Cullman Fellow at the New York Public Library. In 2010, he was named one of The New Yorker's "20 Under 40."
Loading...
or
Not Currently Available for Direct Purchase