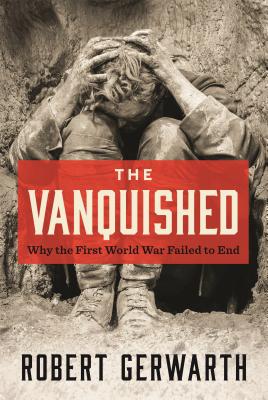 Why the First World War Failed to End

An epic, groundbreaking account of the ethnic and state violence that followed the end of World War I—conflicts that would shape the course of the twentieth century

For the Western Allies, November 11, 1918, has always been a solemn date—the end of fighting that had destroyed a generation, but also a vindication of a terrible sacrifice with the total collapse of the principal enemies: the German Empire, Austria-Hungary, and the Ottoman Empire. But for much of the rest of Europe this was a day with no meaning, as a continuing, nightmarish series of conflicts engulfed country after country.

In The Vanquished, a highly original and gripping work of history, Robert Gerwarth asks us to think again about the true legacy of the First World War. In large part it was not the fighting on the Western Front that proved so ruinous to Europe’s future, but the devastating aftermath, as countries on both sides of the original conflict were savaged by revolutions, pogroms, mass expulsions, and further major military clashes. In the years immediately after the armistice, millions would die across central, eastern, and southeastern Europe before the Soviet Union and a series of rickety and exhausted small new states would come into being. It was here, in the ruins of Europe, that extreme ideologies such as fascism would take shape and ultimately emerge triumphant.

As absorbing in its drama as it is unsettling in its analysis, The Vanquished is destined to transform our understanding of not just the First World War but the twentieth century as a whole.

Robert Gerwarth is Professor of Modern History at University College Dublin and Director of its Centre for War Studies. He is the author of The Bismarck Myth and a biography of Reinhard Heydrich. He has studied and taught in the United States, the United Kingdom, Germany, and France.

Praise For The Vanquished: Why the First World War Failed to End…

“[Gerwarth's] account is both important and timely, and obliges us to reconsider a period and a battle front that has too often been neglected by historians . . . Well-researched and engrossing.” —Margaret MacMillan, The New York Times Book Review

“For many of the Great War's defeated nations and peoples, as Robert Gerwarth shows brilliantly in The Vanquished, the full course of strife and bloodshed ended only in late 1923 . . . Based on a staggering range of primary materials and secondary literature, The Vanquished fills a vast canvas . . . [A] path-breaking study.” —Brendan Simms, The Wall Street Journal

"Utterly fascinating . . . [The Vanquished] probes deeply into an area of this intensely-studied war that comparatively few studies take on at such length and detail . . . The long after-effects of the Great War are painted with comprehensive skill in these pages; it’s an account unlike any other in the crowded field of WWI studies . . . Vital reading, essential for any student of the First World War." —Steve Donoghue, Open Letters Monthly

“This narrative of continent-wide chaos makes it easier to understand why order came to seem a supremely desirable objective in 1930s Europe, trumping freedom . . . it helps us understand why few wars reach tidy conclusions: once a society has suspended its instinctive, social and legal prejudice against killing, it often proves hard to restore.” —Max Hastings, The Sunday Times

“Gerwarth fills The Vanquished with illuminating quotations and stories that pull together a complex narrative about the uneasy peace of the late Twenties and shine a piercing light into darkened corners of history . . . The Vanquished is an unnerving reminder of how stubbornly some geopolitical fault-lines endure.” —Sinclair McKay, The Telegraph

“A mixture of fast-paced narrative and fluent analysis of the turmoil that unfolded in the lands of the four shattered empires, as well as Greece and Italy, either side of the November 1918 armistice on the western front. Gerwarth demonstrates with an impressive concentration of detail that in central, eastern and south-eastern Europe the carnage of the first world war by no means came to an end, as it did for the British and French, in late 1918.” —Tony Barber, Financial Times

“Gerwarth has synthesized an enormous range of primary and secondary sources in half a dozen languages. Combining a big-picture overview with close-up detail - we hear the voices of soldiers, politicians, civilians - Gerwarth has written a vivid if disturbing account of a crucial period in 20th century history.” —Matthew Price, The National

“Searing and vivid . . . a timely reminder that the roots of century-long violence can be traced back to the cataclysmic end of the Great War.” —Richard Overy, Literary Review

“Gerwarth's fascinating and finely crafted book is a rich combination of military, political, cultural and social history. He makes good use of literary sources and witness testimony to bring the events he narrates to life . . . an impressive work of highly accessible scholarship.” —Geoffrey Roberts, Irish Times

“This is an important and compelling book with a fascinating and chilling narrative ... Gerwarth reveals how the forgotten postwar violence comprised a key step on Europe's descent into darkness.” —Alexander Watson, BBC History Magazine

“While Gerwarth's warfare theories are cogent and convincing, he never loses sight of the human dimension. He skillfully avoids the danger of getting bogged down in a mass of detail, livening up his narrative by using contemporary quotes from politicians, soldiers and writers. One mark of a good history book is that it allows the reader to see familiar events from a new perspective . . . [i]n this respect, The Vanquished is an exceptional history book.” —Andrew Lynch, Sunday Post Business Magazine

“[Gerwarth] shines a light on what is, from a western European point of view, a somewhat obscure and relatively short period of time . . . from the layman's vantage point, it is so well written that it reads like a novel. Tragically, for the people killed, wounded and forced to flee from their homes, it is not. This book is well worth the read. —Frank MacGabhann, Irish Independent

“This fine and timely study makes a compelling case for the argument that the bloody aftermath of the war did more to destroy European civilisation than the declarations of war in 1914 . . . at a time when Vladimir Putin seems intent on regaining Tsarist Russia's frontiers, and the map of the Middle East drawn by the victorious powers becomes ever more blurred, we might well ask whether the First World War has ended yet.” —A.W. Purdue, Times Higher Education Supplement

“A clear and excellent account of the abrupt break-up of the Habsburg, Hohenzollern, Ottoman and Romanov empires and the difficult birth of their successor states during 1917-23.” —History of War Reviews

“Gerwarth provides an essential contribution to our understanding of the interwar years.” —Jay Freeman, Booklist

“The first study of the disorders that shook all the defeated states of Europe following World War . . . In this extensively researched and crisply written account, Gerwarth explores the political and military upheavals throughout central Europe . . . A thorough explanation for the rise of the nationalist and fascist groups who set the stage for World War II.” —Kirkus Reviews